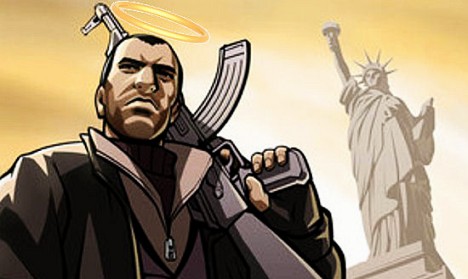 Turn on the TV and you have every chance of seeing some pundit attacking Grand Theft Auto IV. With the game being released a week ago, the usual moral crusaders are up in arms about the bad values it teaches and the terrible things players are “encouraged” to do in the game.

I will never hold GTA up as a franchise steeped in morality, because it’s not. The game portrays, just like its tagline, how “good things happen to bad people.” You spend your time working for scumbags and criminals, doing terrible things for money. It’s NOT a game that celebrates the good side of life — nor does it have to.

That said, however, playing Grand Theft Auto IV has been an interesting experience for me. Since I made a career out of writing about games, I’ve been far more aware of GTA‘s so-called depravity, and have spent a lot of time in Liberty City thinking about what developer Rockstar is trying to say, breaking down some of the seedier aspects of the game and deciphering what the player is expected to feel as he plays.

I think of the game’s less savory features — murder, female degradation, drunk driving — and I have to wonder, does indulging in these elements of GTA IV really say a lot about the game, or the player? Just how much sin does Rockstar actively encourage, and how often does it actually dissuade you from being a bad boy?

Hit the jump to find out how Grand Theft Auto IV can be just as much Angel as Devil. (Warning: Very minor “spoilers”)

Nobody’s saying there isn’t a lot of murder in the game. Killing isn’t a mere choice — it’s a necessity for most of the in-game missions. If you want to progress in the game, you’re going to get blood on your hands. That said, however, senseless killing isn’t all that encouraged. Gone are the days where you could pick up a “rampage” token and mow down innocent civilians. The people you have to kill are mostly people who deserve it — lowlifes and drug pushers and fellow killers. That’s not saying it makes murder better, but Niko is not a character intended to wipe out half the population of Liberty City on a whim.

Rockstar was incredibly clever with the character of Niko, creating a likable and sympathetic individual who, to anybody mindful of storytelling and the artistic side of games, should not be going on a murderous rampage. It’s simply out-of-character for Niko to become a mass murderer, and as such, killing sprees do not feel right. Previous characters were far more two-dimensional, and as such it was easier to disassociate and go out for a rampage. With Niko, if you care enough about the character, you shouldn’t want to kill everyone in sight.

Even if you do want to drop out of character and turn psychopath, however, Rockstar has implemented far more forceful ways of discouraging you. For one, the Liberty City Police Department is everywhere. It can actually get pretty annoying, as the streets are crawling with cop cars, and if you accidentally hit the buggers, you’ll get chased down. The LCPD is a constant threatening presence in Grand Theft Auto IV, roaming the streets, sounding off warning sirens at you if they see you speeding or running a red light. They consistently remind you that you are being watched, and that if you cross the line, they will be there.

And they will — you cannot rampage unchecked for long in Liberty City anymore. Even killing one person can alert the cops, and if you make a stand, that Wanted Level will climb with worrying speed. It’s not long before Liberty City’s N.O.O.S.E task force is dispatched, and you’ll be cut down in seconds. Put simply — Liberty City will fight you if you try to fight Liberty City.

One interesting thing to note is that even among the enemies you do have to kill, you don’t always have to finish them off definitively. Take a look next time you drop someone who isn’t scripted to die. You will often see them breathing, or writhing. Some of them even get back up and start limping away, clutching their wounds. If you kill only the people who absolutely, positively have to die to advance the story, you’ll find that GTA IV‘s death toll is minimal, at least no greater than any other third person action game.

Niko Bellic is not proud of his actions, or standing in life. Through his in-game conversations with cousin Roman, you will hear his commentary on the state of things in Liberty City. He constantly complains about his lot, having to kill for money, and jacking cars. I admit this is at odds with the sometimes casual way in which he accepts blood money, but it’s certainly more than most games throw into their exposition. As Niko takes his girlfriend out for a date, he uncomfortably diverts the conversation away from his job, trying not to tell her he’s a hired gun. You actually get to experience that kind of horrible double-life situation, and think about how Niko must feel, knowing that a girl who likes him is looking into the eyes of a killer.

On the subject of girls, the degradation of women is a large bone of contention for many. Again, I cannot claim it isn’t there — there are indeed strip clubs where you can go and ogle digital breasts, but then, there are strip clubs in real life, so it’s not like Rockstar invented the idea. That’s not what this is about, however — this is about how Rockstar might be discouraging you from objectifying women, and that’s through dating.

Yes, as with real-life dating for most males, the objective in GTA is to get Niko some pussy. You take a woman out, work out what she likes, and spend time with her, with the goal of getting laid in mind. However, once again, Rockstar crafted some likable characters out of Niko’s dating pool. You get taught that these women have tastes and personalities. It’s not exactly deep, but it’s deeper than you’d expect, and if you think the dating is over when you’ve finally gotten what you were after — think again.

You end up not just screwing these people, but getting into a relationship with them. It’s like you are intended to feel guilty if you just ditch them after taking what you came for. I scored with Michelle long before I stopped taking her out (for reasons beyond my control). If I forgot her for a while, she called me and I felt bad. Unless you as a person enjoy being an asshole, you’ll realize that these women are not there as objects, but as friendships that need to be maintained. It all goes towards humanizing a game that one could so easily see as nothing but monstrous.

Speaking of monstrous, the infamous argument that GTA allows you to hire a prostitute, kill her and take back your money has also been colored with dissuasion from the developers. As is tradition, I spent my time looking for a prostitute to hire (don’t judge me!). First off, it’s pretty hard to even find them, but once you have done so, you can begin the ghastly business at hand — and the best thing is that Rockstar has actually made it ghastly!

Hell, when I ran the prostitute over to see if the money appeared, it didn’t. While I can’t speak for everyone, I have to say that no monetary reward was yielded to me when I killed the woman.

That Rockstar took one of its most controversial aspects and turned it into an actual piece of effective social commentary, doing nothing but mocking the use of prostitutes, is commendable in my book. Again, if you feel great after using them in GTA IV, it speaks of the player, not of the game itself.

Reckless driving is also shown as a less-than-glamorous activity. Thanks to Rockstar’s frustratingly loose handling of the cars, speeding and mowing everyone down is far less satisfying. The most important aspect though, is the drunk driving. Mothers Against Drunk Driving and members of the police force like to think that drunk driving has been turned into a “joke” by Rockstar, and I will concede that at least walking around drunk, falling over objects in Euphoria Engine-powered stupidity, is pretty hilarious. Trying to operate a car, however, is another matter entirely.

It is simply not fun to drunk drive in GTA IV. It’s infuriating and disorienting, and the police are on your ass in an instant. This game does not make drunk driving look cool or enjoyable at all. As soon as you get behind the wheel after Niko’s been to the bar, you’re in for nothing but trouble and pain.

I said at the beginning of this article that Grand Theft Auto IV is not a pillar of morality, and it isn’t. It is violent and it has plenty of sexual content, if you consider sex immoral. However, GTA IV does not glamorize or applaud violence even half as much as people think it does. You do not kill without consequence, and Niko is not made to appear awesome for his murders. Death is not glorified, and you are not expected to feel like a God for the amount of death you dish out. Niko Bellic is not John McClane, and that’s not what he’s there for.

Okay, so it’s not Grand Theft Angel by a long shot. But it’s not The Devil, either. Nowhere near.