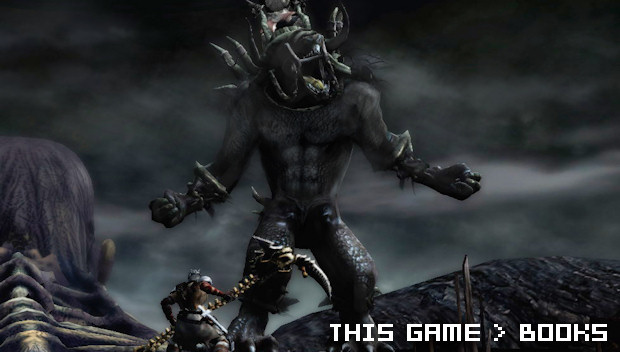 Its name might offend woolly liberals and book owls, but Electronic Arts is about to take on a far more deadly opponent — Kratos himself. Speaking with VG247, God of War III‘s Stig Asmussen is looking forward to EA’s literary sacrilege, expressing his hope that the game will provide stiff competition to his team’s PS3 exclusive.

“Some of the guys who used to work on GoW are working on Dante’s,” he states. “Really good guys. I hope they make a fantastic game that serves as good competition for us. I think using Dante’s Inferno as a theme could really cook into something special – it is a very rich world to draw from.

“As far as a threat to Kratos goes, I hope so. We need more great games in this genre.”

That’s a great attitude to have, and it’s always fun to see a studio embrace friendly rivalry rather than produce the mean-spirited trash talk we see so much in the industry. Hopefully EA responds well to the thrown gauntlet and the two studios use each other as spurs to create a pair of excellent action games.

I am really looking forward to both these games, and talk like this only raises my expectations.

Filed under... #Electronic Arts#God of War