On dubious morals and dubious presentation

In what may be considered a storm in a teacup, not quite gaining the same traction as other controversies, God of War: Ascension has caused a bit of a stir with a “misogynistic” Trophy, an award you get as part of the main campaign.

The basic story is that Kratos, ever a beacon of sensitivity and consideration, beats the everloving crap out of a woman (a beatdown suffering from no shortage of upskirt camera angles) before impaling her on a spike. In fairness, the woman is evil, laughs off most of the violence, and appears unharmed afterward, but the real issue is the fact that, after the battle and a brief exchange with a male ally, players get a Trophy called “Bros Before Hos.”

The whole scenario was enough to disgust reviewer Adam Sessler, who called it a “gut-punch of misogyny” and confessed it colored the entire experience for him. Naturally, others have heard the clarion call to defend the game from any accusation of potential sexism, and there’s been quite a scuffle over the whole thing.

So what’s the deal? Is it sexist? Is it a problem? In some ways yes, and in other ways, no. One thing I think it really does is expose a major issue with the way games are presented these days, and how developers should be careful in absolutely every element of a production. 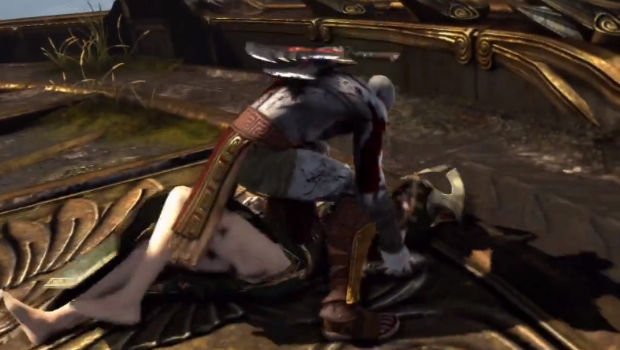 As far as the in-game content goes, I’m hard pressed to be too offended by Ascension, personally. I certainly don’t begrudge anybody the right to be offended by it, but at the very least, I’d say the scenario as presented more or less fits with Kratos’ character. He’s a violent, and rather unpleasant protagonist, who has been sacrificing defenseless men and women since the first game, let alone invulnerable women who can fight back. His is a world of Greek Gods and mythology, a world already famous for treachery, amorality, and characters generally considered none too nice.

This is not to say the imagery contained within the game isn’t potentially distressing for some audience members, but then again, that’s why games have warnings, and I think anybody jumping into the God of War series at this point has a full grasp of the content it displays. Again, this is not to say those with a problem should be shouted down or silenced, simply to say that this is what God of War is.

It’s perfectly acceptable to have a “hero” we may disagree with, who may even be morally repugnant to us. I recently fell in love with the House of Cards trilogy — the original UK show — and found Francis Urquhart a thoroughly compelling protagonist. I find his morals dismaying, his ethics alarming and his politics utterly terrifying. He’s a hard conservative with contempt for the poor, he’s a murderer, a backstabber, and altogether dangerous to know.

Yet, he’s also charming, and deliberately takes the viewer into his confidence, breaking the fourth wall to turn us into his sympathizers whether we like it or not — a fact he gleefully points out. It works with horrific effectiveness, causing us to constantly examine who we’re rooting for and why we’re so enthralled with a man we find so utterly despicable. When games attempt this, I can’t help but be excited. 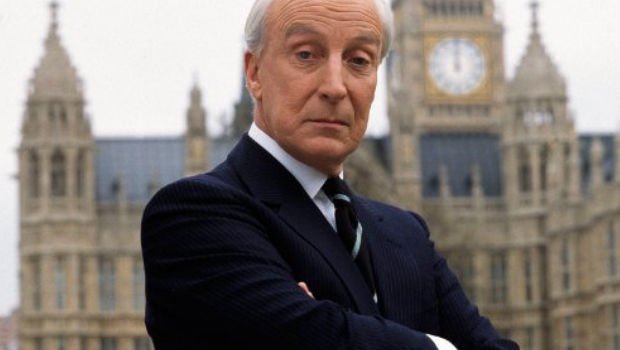 However, games are always hamstrung by the fact they are, of course, games. Francis Urquhart may force us along for the ride, but we are only on a ride — belted in, strapped up, and passively following along. Is it impossible for gaming to give us an Urquhart? Not at all. It may be harder, but it’s not impossible. In fact, it’s been done several times over.

Anti-heroes with questionable morals aren’t exactly new to videogames. Saints Row 2 puts players into the booties of a psychopathic manchild, a character we would have to view as a villain protagonist at best. His or her idea of retribution is shockingly disproportionate, and not once is it ever portrayed as a bad thing. Volition Games was able to get away with this through sheer audacity, ramping up its narrative to such utter extremes that we have to laugh along with its ridiculousness. We are disarmed by the silliness of it all, and it allows us to be willing accomplices in our avatar’s endeavors without feeling too guilty.

Humor isn’t the only method of successfully presenting a villainous protagonist, of course. For all its documented problems, Kane & Lynch: Dead Men was at least a fascinating exercise in allowing players into the lives of two thoroughly irredeemable human beings. Amoral at best, dangerously insane at worst, Kane and Lynch are excellent examples of playable characters whose actions, however complicit we are in them, remain nonetheless disagreeable. We’re not supposed to like, or feel sorry, for these characters. We’re aiding them, we want to see how their story ends, but the game frequently reminds us that they’re scum, true lowlifes who essentially survive, but never get to live.

It’s all about the presentation in the end, and this is where God of War: Ascension really fouled up. The problem with Trophies (and Achievements) is that they have increasingly become punchlines, pithily named pop-ups appearing at the end of any major chapter in a videogame. Playing through any narrative campaign, we expect to hear the familiar chime accompanied by a witty summary at the end of any major boss fight or cutscene. For the player increasingly steeped in Xbox 360 and PS3 gaming, a significant event in a story feels almost naked without it. This, however, is clearly presenting an issue in some scenarios.

Without the “Bros Before Hos” crack, Ascension provides a shocking, potentially disturbing, sequence — one that is in keeping with Kratos’ questionable brand of heroism. With it, the whole thing is presented as a joke, which can then be taken as a mockery of violence against women. It is not, however, the first time a game’s content has been undermined by Trophies. 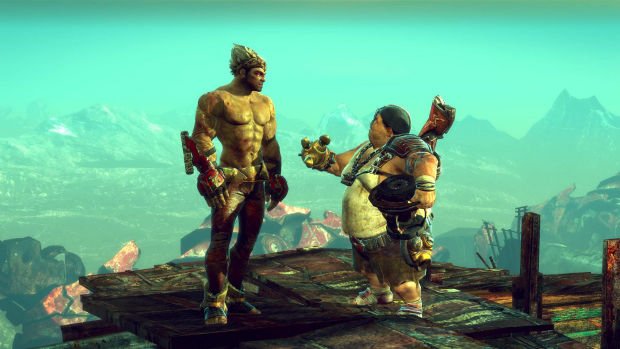 Enslaved: Odyssey to the West (and be warned we’ve got spoilers coming) features a character by the name of Pigsy, who naturally inspires a slew of porcine puns in the game’s Achievements/Trophies. Phrases like “Swine Flew” and “What a Pig” all pop up through the course of the game, hoping to inspire a cheap smile with a little light wordplay. This is relatively inoffensive stuff, until a late chapter that attempts to tug at our heartstrings, and fails through no fault of the writing itself.

Essentially, Pigsy dies in an attempt to save the heroes from a group of enemy death machines, a moment played not for laughs, but for tears. Pigsy was something of a joke character up until that point, but comes through in a fairly archetypal display of self-sacrifice, one that’s really not badly done. Until, of course, the Achievement “Smoky Bacon” pops up, reducing the entire scene to a joke. At that moment, any attempt to build an emotional response from the audience is lost, any sense of sadness immediately shattered. Pigsy’s death, far from being a noble display of affection and respect for his allies, is now a gentle goof, complete with punchline.

Can you imagine your response to The Lion King if, when Simba discovers his father’s body in the ravine, a subtitle displaying the message, “MuFAILsa” popped up? Or perhaps if, in Final Fantasy VII, that famous death scene was punctuated with the phrase, “Anyone fancy a kebab?” It would ruin the entire atmosphere, and bring you out of any feeling the content was trying to evoke from its audience. 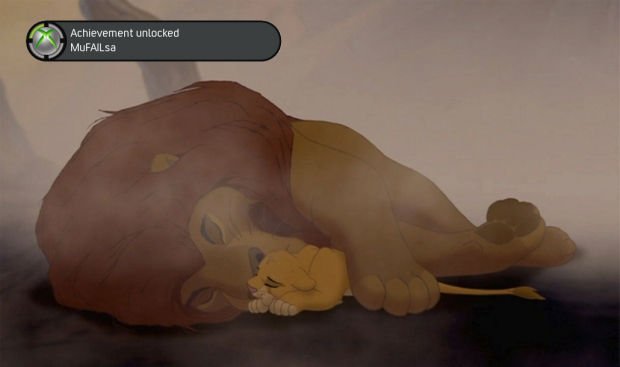 This is the risk posed by Achievements and Trophies, though it needn’t always be a detriment. Portal 2 used the system as part of a joke, in which its main antagonist announces “the part where he kills you,” followed by a chapter note confirming this was indeed the part where he kills you, followed then by an Achievement popping up called — you guessed it — “The Part Where He Kills You.” Perfectly timed, and a very clever way of using something unique to games to enhance the narrative experience. This was a joke only a game could make, and it needn’t just be for comedy.

There’s a prevailing attitude that Achievements and Trophies are meaningless — pointless distractions that are best ignored. Indeed, you can even turn off notifications for them in most cases. However, some people like them, others find them largely acceptable, and altogether there’s a clear point to be made in their impact on the way we approach and respond to games. Without that Trophy in Ascension, and its use of a pathetic and tacky sentiment, I dare say Sessler would not have been so damning in his appraisal of the game. Without that Achievement in Portal 2, a good joke would not quite have been hammered home. These systems are a part of gaming now, linked closely to the experience, and should be respected — a savvy developer can exploit them to great storytelling advantage, while an ignorant one can unwittingly create a faux pas.

It’s one extra element to consider when your game contains shocking or questionable content, even more so when your antagonist is a Kratos, a Lynch, or a Saints Row gang leader. Presentation is key, and if games want to keep evoking that masterfully malevolent Francis Urquhart — which I hope they do — they’d best seriously consider how all elements of a videogame, even the throwaway ones, can effect that presentation.