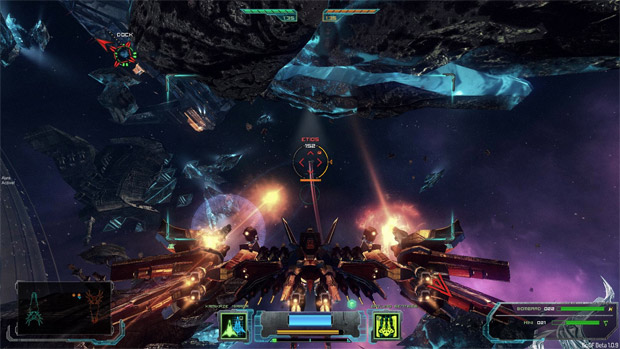 Wingmen is a 4v4 competitive arcade-like title where the goal is to destroy the enemy’s 13km carrier while defending your own. Taking down these massive ships will require you to coordinate your attacks with your allies to destroy vulnerable areas.

Each carrier has six Integrity Points that must be lost before that ship is defeated. IP can be lost in two ways: being shot at by a carrier’s main cannon or by having one of its major components destroyed by the players. Taking out each of the components will have a different effect on the game.

Two examples of this strategic dismantling of the enemy’s defenses are by destroying communication towers and force field generators. The first will reduce the amount of information the enemy can receive from its carrier, allowing for sneak attacks. The second will make some areas more vulnerable by removing the ship’s barriers, allowing entrance to its core.

Since the carriers can fire at one another, the game can be won either offensively or defensively. An example of this would be to strike only one or two sensitive areas of the enemy’s carrier and then hang back, concentrating your efforts on defending your own vessel while your carrier finishes the job.

I have a feeling that this title is going to be getting a lot of play at the co-op gaming sessions that I’ve been hosting at my house. It seems really well suited to shouting at one another across the room, working out on-the-fly strategies and jokingly cursing your teammates for their ineptitude.