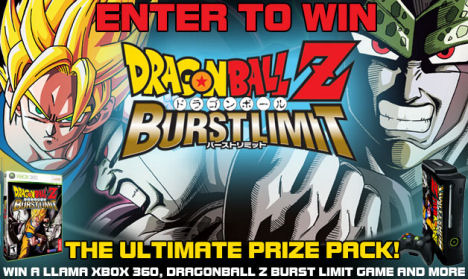 Destructoid is committed to bringing its readers the best contests we can, and thanks to our friends at Rocket XL, we are proud to offer one lucky Dtoid fan the chance to win a Llama Dragon Ball Z: Burst Limit edition Xbox 360 (estimated value $2500!!!) and a copy of the game to play on it. You’ll also get a T-shirt, hat and poster. Just because we can do that.

What do you have to do in order to win this most fabulous prize? Well, as tempting as it was to give it to the first person to make this post’s thread over nine thousand comments long, I have instead settled on something a little more entertaining. To be the sole winner of all the precious swag, you must amuse me with your rendition of the infamous “OVER NINE THOUSAAAAAND” scene from Dragon Ball Z and post it as a Community Blog. Just make sure the c-blog’s title has “OVER NINE THOUSAAAAAND” (use as many A’s as you like) in it.

Your recreation of the greatest moment in animation history could take many forms, as long as it incorporates the famous line and makes me laugh. Be it a Photoshop, a comic, or a video of some kind, just let your imagination run wild and make sure it’s funny. Whomever can make me laugh the most with their Nine Thousandry will get the Xbox 360 and related gear.

You have the rest of the month to complete your assignment. The contest officially ends on June 30 at 23:59 GMT. As much as I want to include my countrymen, I regret to inform you that this contest is open to US residents only. There can be only one winner. Forcing a pig into a medieval-style catapult won’t guarantee victory, but may increase chances dramatically.