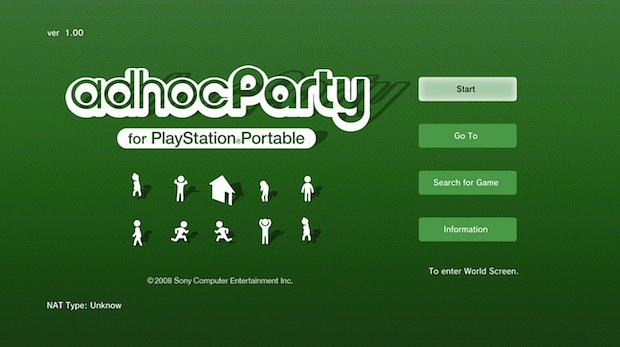 Late this afternoon, SCE made it possible to compete in Internet multiplayer matches while on the toilet. And it was as easy as offering US PSP owners a downloadable app that works around ad hoc functionality.

The app is called adhocParty. It may seem fresh, but it isn’t — it has been available in Japan for some time, allowing the droves of Monster Hunter PSP players to connect without having to be near each other. Regardless of newness, adhocParty has just been released in the US as a free download via the PS Store.

As explained in a PS blog video, a PS3 is needed to make the app clap. The big black system acts as a dongle and also provides the visuals for the hoops (creating lobbies, finding players, etc.) you’ll have to jump through in order to play ad hoc games through the Internet. But before that, you’ll have to register your PSP and download the application as if you were setting up Remote Play again.

Just think of the process like adding a controller, except the PS3 actually does something this time around.

Currently, SCE is making a big deal out of Gran Turismo and Monster Hunter support, but we’re guessing adhocParty also works with other games, so give it a spin and experiment if you care. And speaking of caring, a video walkthrough courtesy of the publisher of the app is available over at the PS blog. Go learn!

Filed under... #PSP#Skeletons are awesome