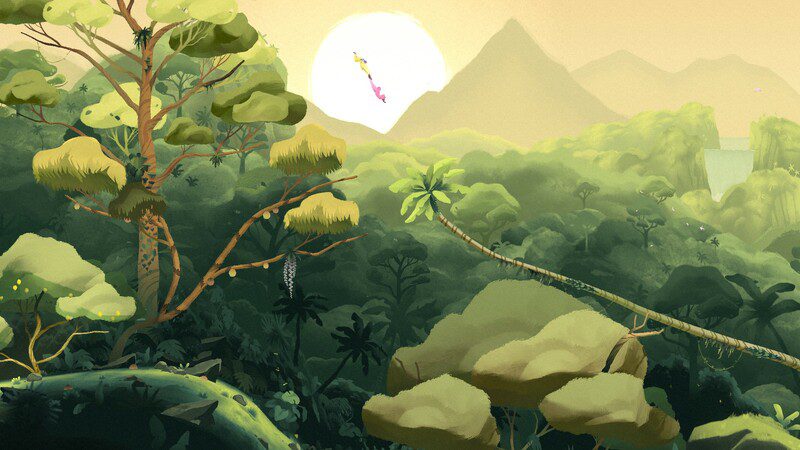 These days, I’m just as excited for new indie games as I am for the year’s AAA heavy-hitters, and Gibbon: Beyond the Trees is the newest title to land on my to-play list. The game was just announced by developer Broken Rules, the same studio behind the 2017 narrative puzzler Old Man’s Journey. It centers on the life of a lost gibbon (a small ape that is native to Southeast Asia), and the story will touch on environmental issues like deforestation, animal extinction, poaching, and climate change.

Gameplay-wise, Gibbon: Beyond the Trees is hard to categorize — from what I can tell from the trailers, I’d say it’s closest to the platforming genre, as players will swing from tree to tree, building momentum and performing tricks. It reminds me a lot of the swinging in Insomniac’s Spider-Man, which was hands down the best part of that game, so that makes me all the more excited to give Gibbon a try. The game will have two modes to choose from: the hour-long story mode, and the procedurally generated liberation mode.

The game’s art is made up of hand-painted 2D visuals, and it looks just as stunning as Old Man’s Journey.

It looks like Gibbon will be one of the smaller games released this year, but that certainly doesn’t mean it should be overlooked. Broken Rules has really proved their knack for effective storytelling in the past with Old Man’s Journey, which was able to tell a moving narrative without any dialogue with a run time under two hours. With the studio taking on such substantial subject matter this time around, I could easily see their new title being up for a Games For Change award in the future.

Gibbon: Beyond the Trees will be releasing exclusively on Apple Arcade on February 25, but will be more widely available on Steam and Nintendo Switch later this year.