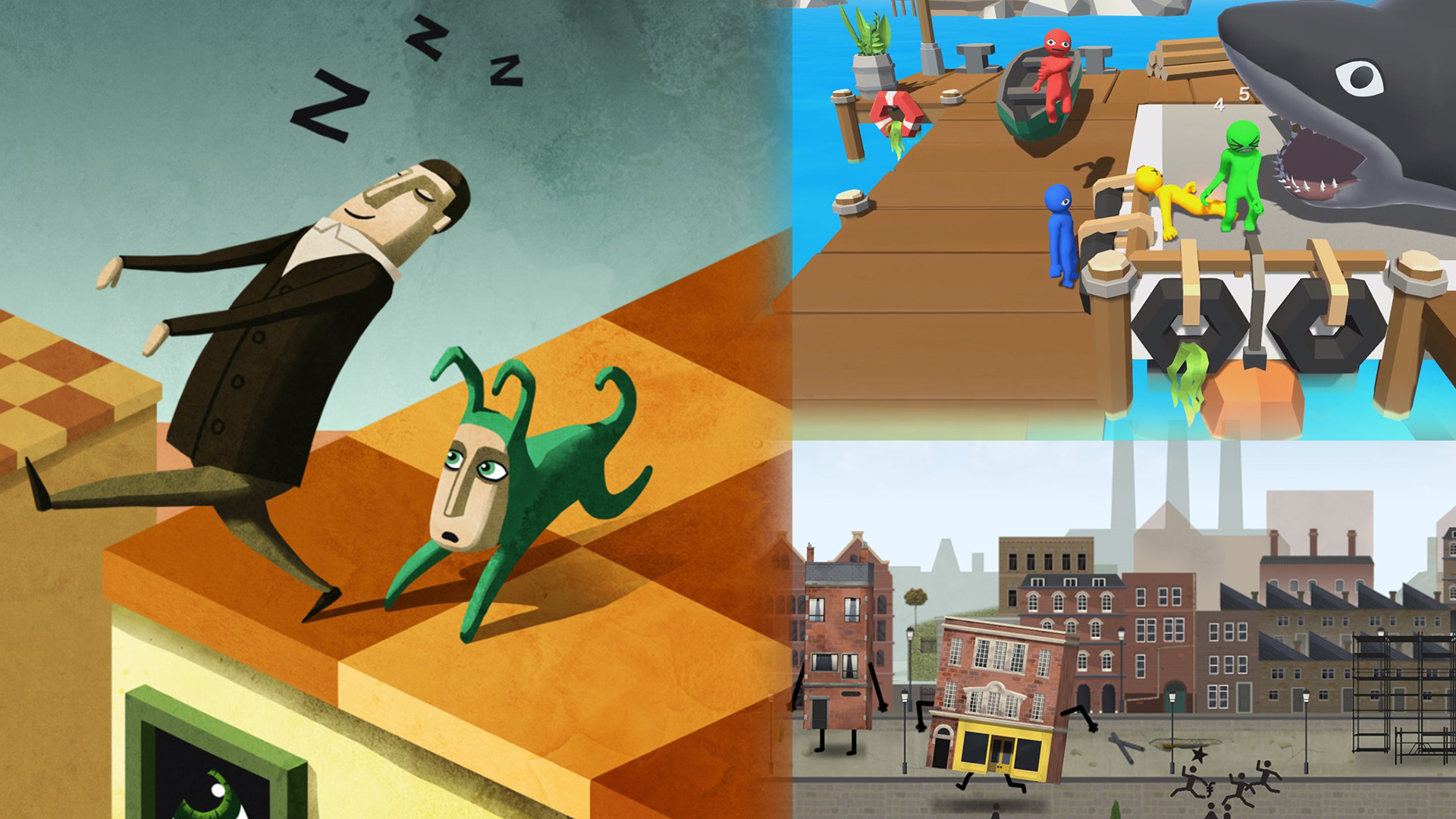 I have no interest in normal things

If you’ve read anything I’ve ever written or said on this here website, you might have noticed that I was dropped on my head one too many times as a child. Then, a couple more as an adult just for good measure. As a result, normal things just don’t interest me. So I’m going to start compiling all the weird, dumb, silly, and strange games I come across to help make sure no one around here gets too normal.

I mean really, who’d want that? Come get weird with me, instead.

Is there inherently anything weird about a four-player arena game where you have to knock your opponents off the stage in order to claim victory? Nope. You could probably find 15 others on Steam before you finish reading this paragraph. But that’s not the point. It’s floppy ragdoll physics that really get me all flaccid in the front-pants, if you know what I mean. No, in this game you can wield impeccably imprecise weapons to possibly, maybe, one day, hurt your friends and eliminate from from competition. Also, about nine seconds into the trailer above someone just gets hit by a car for no real reason.

If the image above doesn’t hit the panic switch in your trousers, then you’re reading the wrong article.

I see one of those commercials where kids have diseases and Billy Baldwin asks for $5 and I turn the channel. You do, too. Just admit it. But then I see those sad doggy commercials where Shania Twain cries with a Pomeranian in her purse and I turn into a blubbering pile of mucous. I don’t know if that means I have feelings or not, but what I do know is I don’t like humans.

Maybe I’m a building in disguise?

In Buildings Have Feelings Too!, you’re tasked with building a city. With buildings. Whose currency is humanity. You need human souls to expand the city’s infrastructure, which I assume includes both regular people and disease-ridden kids. Why should they be excluded from being converted from flesh and bone into industrial capital like the rest of us? Buildings aren’t monsters, after all.

But assuming these buildings have feelings, too (because that’s the name of the game), I’d like to assume that while humanity is up for grabs, our four-legged friends are safe from the industrial revolution occurring right underneath our noses. These buildings have feelings, after all. And arms and legs. I have all of those. And if you told me a bunch of random people were needed to satiate a sentient building who needed to procreate with other local building singles in their area, I’d be like, yeah. Go for it, you freaky-ass building. But if you told me they needed an old shar pei girl who just wanted to chill on the dining room floor while you wrote snarky internet bullshit so other people could laugh at goofy video games on a Saturday afternoon, then hoo boy, we’d have a problem. A big problem.

Anyway, this is official PR for Buildings Have Feelings Too!:

Befriend a range of Buildings, each with their own aspirations, hopes and fears, as they come to grips with the changing world around them.

Are they so different from us?

I don’t like this. Nope, not one bit. I’m here, drinking a beer and eating some peanuts, and suddenly I’m a demon in a green leotard trying to get Uncle Terry to bed while the voice from the Red Room in Twin Peaks tries to get me to usher him around town in Escher-esque worlds? I didn’t sign up for this, and neither should you.

The fact is, I like weird things. I like things that hit that lizard part of my dumb, idiot human brain and are all like, “Yeah, you’re fucked up, baby.” This? This is a bit much. I don’t know why that green thing walks on walls. I don’t know why it’s so concerned about Casual Businessman making it to his bed. I don’t know why apples are its main means of defense. What I do know is I pay my taxes, and I shouldn’t be subjected to this. I didn’t sign up for this.

Back to Bed is one of those things that were crafted in a fever dream, in a world where decency and faith no longer have value. Am I the best advocate for decency and faith by presenting these gems of the arcane to you? Definitely not. But I’d like to think that at least my own sanity would be preserved in the process.