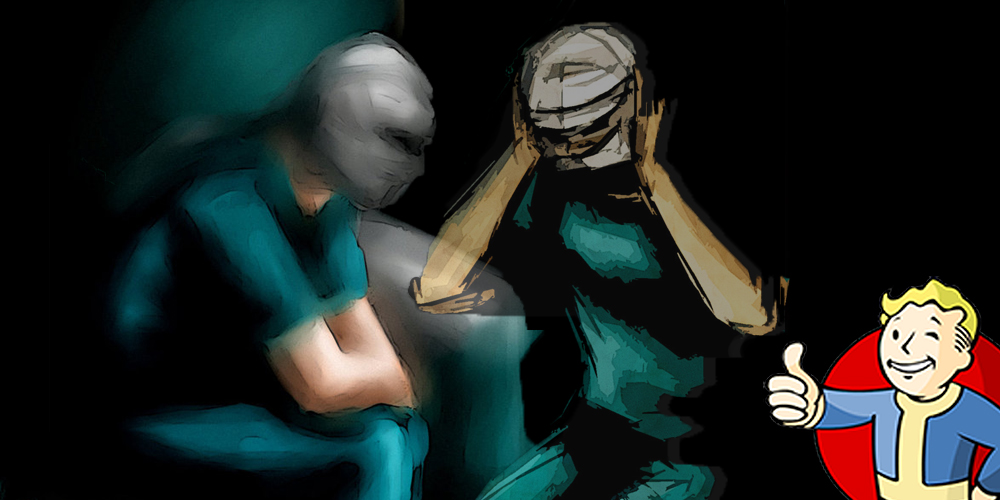 A must play for the sane and insane alike

For a medium where a story can take you anywhere, videogames too often take a familiar route to the same place.

Where are we going this time? A nondescript desert in the Middle East? A futuristic metropolis that is either 20 percent or 80 percent Blade Runner-inspired? Why is this when plenty of films take viewers to outlandish, fantastical settings that bring to mind nightmares and dreams — not cliches of modern fiction? Where can we find such inspired worlds in games?

There are a few that look inward instead of outward in creating a setting. The list is short: Grim Fandango, Psychonauts, Harvester and — oh, yeah — Sanitarium. I may celebrate every one of them for this series in due time, but for now we are taking a look at this little-known eerie PC adventure.

In a nutshell: Sanitarium begins in a mental asylum, yet it’s the most sane place you’ll visit in the game. On a journey to find out who he is and why he is being transported to different dreamworlds, Max takes on different avatars and fulfills various quests. This eccentric, polished adventure game is unlike any other in the genre. From its isometric view to the unsettling character designs, Sanitarium creates a bizarre reality through unconventional means. It’s an oddity, for sure, and one that got it right.

By Sanitarium’s end, many questions remain unanswered but most are buried within the environments and dialogue, waiting to be discovered on subsequent playthroughs. The story’s slow build-up and reluctance to give answers creates an unsettling atmosphere that sets the tone for the events to come. A lack of clarity in narrative may sour many games, but it’s a big part of what makes Sanitarium so great.

If waking up in a mental hospital isn’t disorienting enough, waking up in an abandoned town overrun by disfigured children should do the trick. Each chapter of Sanitarium throws the protagonist in a new environment and often in a new persona. While transitioning from a little girl to a four-armed monster seems completely random at first, the underlying symbolism starts to unspool and make sense of things.

The storytelling, environments, voice acting, music, and dialogue build up an incredible atmosphere that is thick enough to cut with a knife. Sanitarium’s eccentricities recall the films of David Lynch, while the relentless horrors of the game’s story bring to mind Silent Hill. One thing these both share is a great sense of mystery that makes you feel uneasy but compels you to explore a dark, twisted world for answers.

Disturbing but not scary

Sometimes, the horrors that pose no immediate threat are the ones that stay with us the longest. Maybe it’s an issue of over-familiarity but zombies, vampires, and werewolves just don’t provide a good shock anymore. Sanitarium’s disfigured children, lonely freaks, grotesque aliens, and mourning ghosts are far more unnerving to me.

Sanitarium never seeks to scare, but its visuals often got under my skin, despite the dated graphics. Deformed humans acting as if there isn’t anything wrong with them is unsettling on so many levels. Maggot-like aliens and cyborgs drilling holes into giant human fetuses make for a close second place. Even when the game returns Max to the mental ward, he is surrounded by hostile doctors and insane patients.

There is no escape from Sanitarium‘s bizarre characters and world. While some areas are stranger and lonelier than others, everything in the game has the potential to disturb. It creates a unique, threatening atmosphere that isn’t like much else in the medium.

Storytelling that works on multiple levels

Sanitarium’s story has its faults, particularly in its final chapter. The hellbent antagonist’s motivation and mannerisms are exaggerated and unconvincingly villainous. It’s a bad fit for a game that provides a surprising amount of maturity in its approach.

Take, for example, the first large area: A town overgrown with plant life and abandoned by adults after a comet hit. Now, the town is a lonely place where only mutated children reside. Some are more lost and cruel than others but most of them seem pretty content with the state of things. This whole scenario, like all the ones that are to follow, appears completely random at first glance. But then, the environment and characters begin to tell a different story.

Every sub-story of Sanitarium takes place in Max’s mind which gives them all a deeper significance. Abandoned children, a history of abuse, a corrupt preacher, an alien force — all of these things make sense by the end of the game. Even the ideas that aren’t directly addressed can be analyzed and interpreted in different ways. The mulch-faceted storytelling of Sanitarium is a dark and cerebral kind that gives the player tools to answer questions, instead of putting it all on a silver platter.

Making a player feel out of control is a tricky thing to accomplish without eliciting the wrong kind of frustration at a game. When done effectively, however, it leads to some powerful moments. I forgot most of Silent Hill: Shattered Memories but I clearly remember the wheelchair sequence and the impact it had on me. Though the feeling of helplessness that Sanitarium evokes is more mental than physical, it achieves a similar feeling.

Being locked away and abused by staff made me very uncomfortable throughout Sanitarium‘s asylum chapters. Not only will no one help out Max, they constantly lie to him — some even bully him. One Flew Over the Cuckoo’s Nest and 12 Monkeys didn’t make me think, “Man, mental hospitals are awesome!” but they are nothing compared to the ones Max visits.

For a story that mostly takes place in one man’s mind, Sanitarium manages to take players across a lot of cultures, eras, and places. Name another game that lets you control an Aztec god, little girl, and four-armed alien. You won’t because there isn’t one.

Despite being a large, ambitious adventure, Sanitarium feels personal throughout its entirety. Cut scenes consistently link things in the imaginary world with Max’s suppressed memories, making player’s remember that this is Max’s story. Even though you are Max for only a small part of Sanitarium, I never got a sense that he was abandoned as the focus. Exploring Max’s past is always at the forefront of the story, which makes for great narrative motivation.

Each of the game’s dreamworld sub-plots are engaging on their own and are made even more engaging by being linked to a larger thread. Parts of the game seem stupidly ambitious — sometimes to a fault (see: the terrible combat sections) — but Max’s chapters have a way of grounding the story, making it a personal tale again.

If you want to tell a great story, write a book. If you don’t want to write a book, an adventure game may do just fine. Due to the pacing and structure of action in the genre, adventures are most welcoming to deep, innovative storytelling. Players are more willing to take in large amounts of dialogue, developers are more free to explore ideas without violence having to always play a part, and fun puzzles can always tie it all together.

Sanitarium is a damn good story. It may end a bit rough and take a while to get going, but I struggle to think of many game narratives of its caliber. It’s funny then to observe that Sanitarium begins with one of gaming’s biggest cliches: an amnesia-inflicted protagonist. Instead of using this as an excuse to have a cast of character ramble off exposition — I’m looking at you, JRPGs — Sanitarium creates a riveting narrative web work around the concept.