I’ll admit, it’s been awhile since I played Street Fighter IV. Don’t get me wrong, I love the game — I gave it quite a high mark when I reviewed it back in February of last year. But as time went on and other games started to vie for my attention, my interest waned.

So when Capcom announced that, just a little over a year later, it would be releasing an update called Super Street Fighter IV, I was a bit suspicious.  Sure, the updates — particularly the return of older faces — had piqued my interest. The excitement I had felt leading up to the release of an all-new Street Fighter simply wasn’t there. And when a preview copy of the game arrived at my doorstep, I felt a slight jitter of excitement, but didn’t find myself rushing to put the game in my console.

But now that I have, that’s all changed. Spending some time with Super Street Fighter IV has reinvigorated my interest, and has me convinced fans won’t be disappointed when the game hits shelves on April 27. Hit the jump to read why. 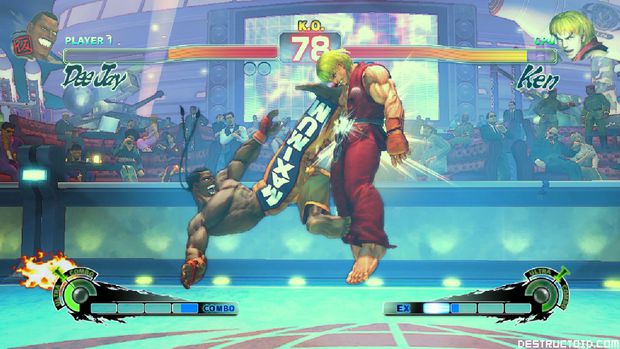 The most obvious place to start would be the updated fighter roster. In addition to the 25 returning fighters from Street Fighter IV, this all new Super variant brings 10 new faces to the World Warrior tournament. Some are familiar, fan-favorites yanked directly from previous games in the series — DeeJay, T. Hawk, Guy, Cody, Adon, Ibuki, Makoto, and Dudley. Their inclusion in Super Street Fighter IV is both exciting because of their familiarity (they share many of the same moves players are already familiar with) and because the series’ hand drawn makeovers give them a fresh look and feel.

Juri and Hakan — the fighters completely fresh to the series — fit right it with the existing roster, new toys to play with that any fighting game fan with a shred of dignity (and curiosity) will almost assuredly choose first.

The mysterious and ridiculously sexual Juri (her English voice actress makes her sounds like a phone sex operator), utilizes a Tae Kwon Doe style of fighting. Her moves are mostly made up of flashy flips and kicks, deployable from both the ground and air. While you’ll find yourself throwing the occasional, it’s clear Juri would rather kick you in the face; pressing the fierce punch makes her do a high kick, which is some good insight into her play style. 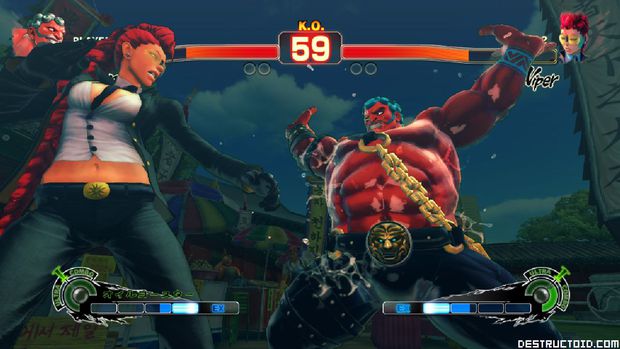 Hakan, the slippery Turkish oil tycoon that fights in an oil wrestling style, is probably one of the crazier characters to find his way into the series in quite awhile. As you’d expect, he’s also one of the series’ most slippery fighters, with at least one offensive ground slide in his arsenal. His “Oily Shower” fighting modifier is as gross as it sounds — he dumps two bottles of oil on his body, which becomes shiny and even more slick, giving him a boost in defense and opening up new moves.

After only a few hours behind the stick, I’m by no means an expert with either Hakan or Juri, and I probably never will be. But it’s obvious that neither are throwaway fighters, easily contenders to become player favorites. Did I mention that Juri sounds like a phone sex operator? That’ll help, I’m sure.

Super Street Fighter IV also strums some nostalgia chords with its inclusion of some classic bonus stages — the car stage and the barrel stage. Old-timers will know just what I’m talking about here, but for the uninitiated, the car stage has you smashing the crap out of a car before time runs out, and the barrel stage has you smashing falling barrels. That’s it.

Completing either of these stages isn’t particularly difficult — the car stage, as in the past, can be complete perfectly by spamming a few special moves. But it’s a great palette cleanser between battles (they appear in Arcade mode, and as challenge modes), and a great way to blow off some steam. 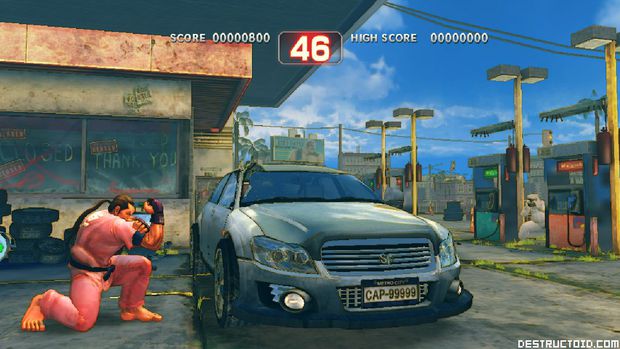 Probably one of the more impressive changes, and possibly the least-talked-about, is the significant overhaul to the game’s online play modes. Added are Team Battles (eight players can battle 2 vs. 2, 3 vs. 3, or 4 vs. 4) and Endless Battles (an arcade-style round robin mode, where eight players participate in 1v1 battles, with the remaining six staying in as spectators). Super Street Fighter IV even offers the ability to create parties in the Xbox 360 version of the game with the push of a button.

But easily the most impressive addition, and the one that should have hardcore players foaming at the mouth, is the all new replay channel. It’s just what it sounds like, letting players record matches and even discuss the battles online with friends. The channel is broken up into a few sections based on fighters: Originals (Ryu, Ken, Chun-Li, E. Honda, Blanka, Zangief, Guile, and Dhalsim); Newcomers (C. Viper, Rufus, El Fuerte, Abel, Juri, and Hakan); Alpha (Sakura, Dan, Rose, Gen, Guy, Cody, and Adon); Turbo and III (Cammy, FeiLong, T. Hawk, DeeJay, Ibuki, Makoto, Dudley); and Boss (Balrog, Vega, Satat, M. Bison, Akuma, Gouken, and Seth). 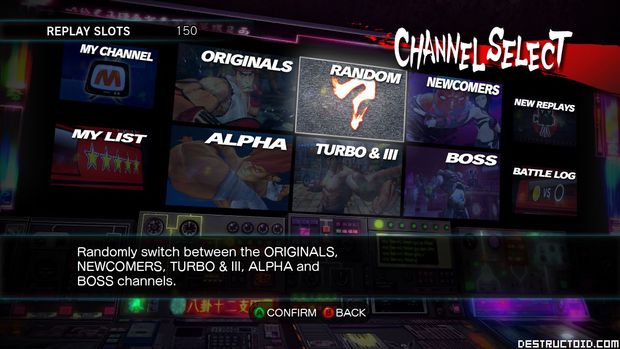 I was easily able to quickly watch top matches of people playing who are far better than I am. This would be a great way to pick up techniques, study top players, or simply be dazzled by some of the precision and skill of the world’s best.

It’s easy to whine that Capcom is releasing this game as an entirely new package so soon after the release of Street Fighter IV. But it definitely looks like they’ve done a great job in adding features and adding value here, making it a title that will easily replace Street Fighter IV as your fighter of choice. Oh, and Capcom isn’t even selling Super Street Fighter IV at full retail price –the damned thing will only cost $39.99 when it hits retail on April 27.