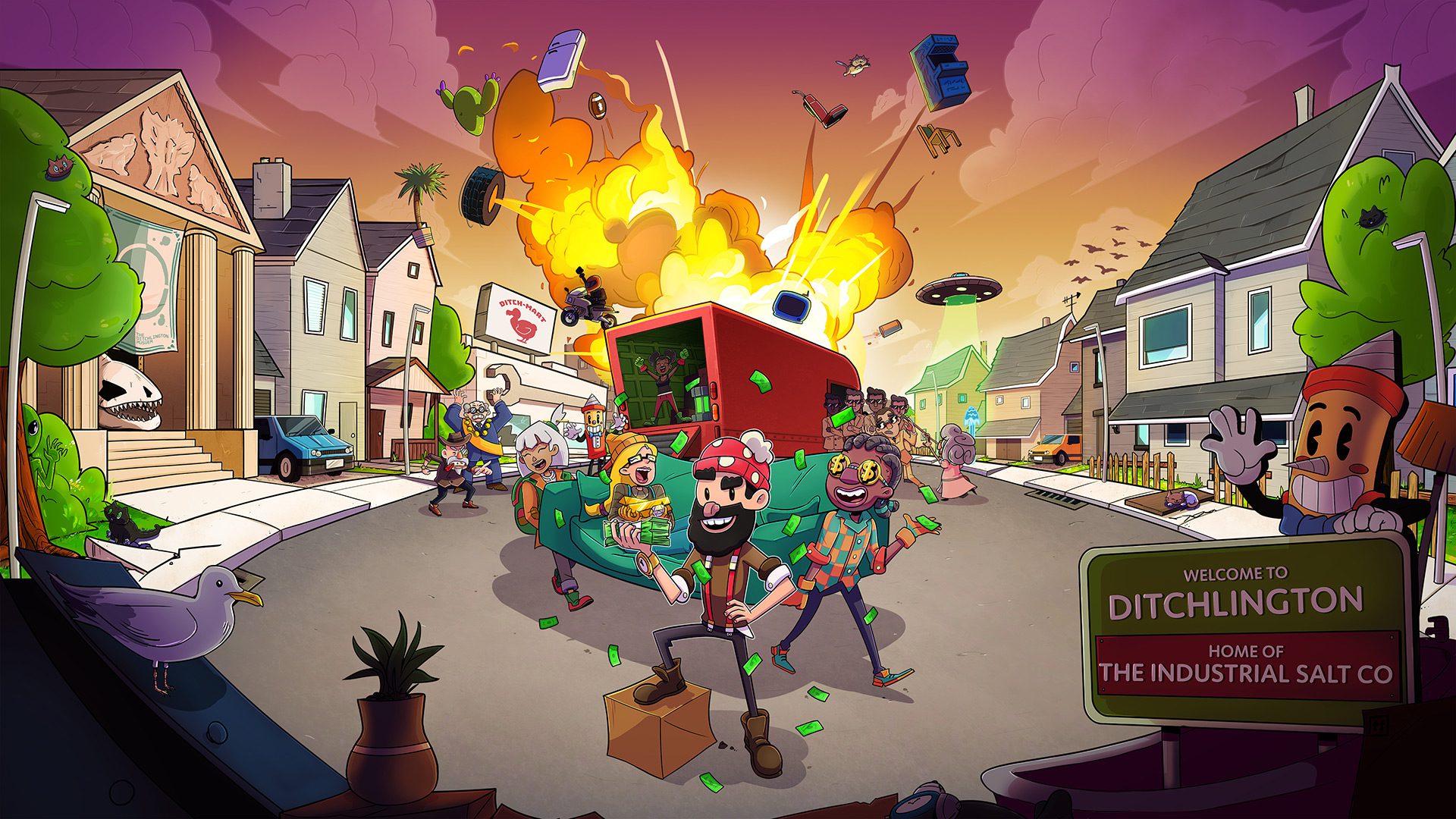 The Stadia-only window has ended, so now you can play it on Steam, PS4, and Xbox One

As of this weekend, I’ve played through two co-op party-action games about moving, and you know what? I don’t think Moving Out and Get Packed: Fully Loaded will be the last. I’d be fine with that fate, too — even if I would prefer entirely new spins on the Overcooked formula with as-yet-unseen activities. Moving, in video game form at least, can be fun.

Yes, these two games are both about hauling furniture out of homes (and then lots of super-random stuff), but they feel very different to play once you dig into them. Having experienced Moving Out prior to Get Packed: Fully Loaded, which just ended its timed-exclusivity stint on Stadia, I was a little skeptical. I’m glad I tried it, though. Its faster, more frantic pace and surprisingly out-there storyline ended up clicking with me.

While I wasn’t really sold on Get Packed until I had the game in my hands, it’s worth a nod. 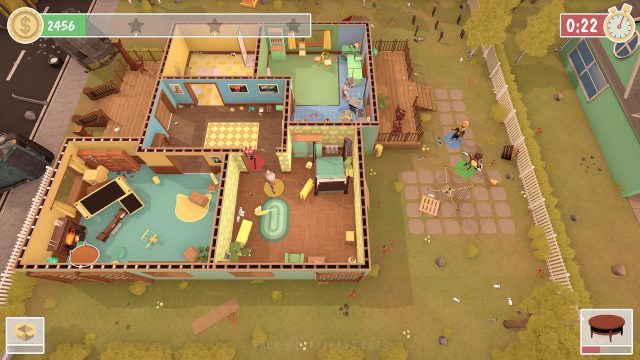 Get Packed has more of a chaotic — and, at times, rough-around-the-edges — spice to it. Sometimes, the explosive physics system can be frustrating. Other times (arguably even most of the time), it keeps things light and exciting. For people like me who thought Moving Out ran the risk of being plodding and repetitive, you’ll appreciate that there’s no downtime, and before you know it, you’re onto the next wild set piece, like a UFO site.

In typical [these sorts of co-op games] fashion, you and up to three other players (local or online) are striving to build up a high score within a time limit — enough points to get at least a one-star rank, so you can move onto the next level. In this case, it’s a matter of moving high-value items into a truck, sending it off to go bank your earnings (then waiting for it to slowly return with room for more assorted junk), and trying not to cause too much collateral damage. There will always be some, I swear. Everything is volatile in Get Packed.

On a controller, the left and right triggers correspond to your mover’s left and right arms/hands, and they sometimes have a mind of their own when you’re trying to pick up something small, or something shrouded in a stacked room. Needless to say, when you’re attempting to drag around a lunar module or a motorbike that will auto-accelerate the moment you lay a finger on it, tidy tendencies just have to go out the window.

In a calmer game, you’d carefully package everything up, trying your best not to smack door frames, smash open windows, or collide with other fast-moving players. Time is not on your side in Get Packed, though — it’s a tricky balancing act to snatch up (often hilariously oversized) objects and get them into your truck without anything busting open from one wrong step, and there’s not enough time on the clock to let you take things slow.

Stressful? For perfectionists, definitely. There’s a layer of imprecision to overcome.

But as someone who was okay with taking a few cracks at the same levels just to clear them, much less complete bonus packing goals, I didn’t mind the pushback. A good chunk of the game is getting a feel for which items are — and crucially, aren’t — worth hauling. Then there’s the constant “when should we send the truck off?” factor. No matter what I decided, trust me, it was the wrong call. It’s a classic shade-throwing co-op setup.

There are 18 levels, with three per story-driven stage, so there’s not a whole lot of overlap. Get Packed doesn’t outstay its wacky premise. I’d call it a two-session game. 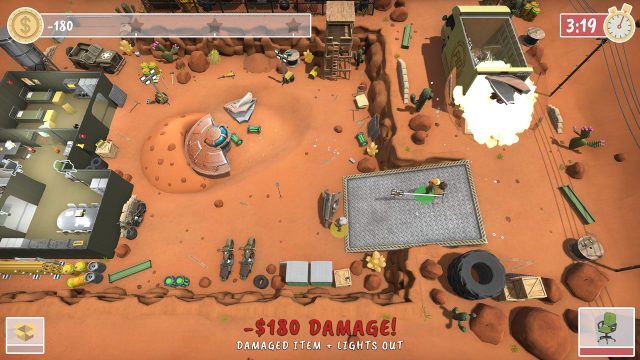 At one point, you’re whacking a security guard so you can haul off treasures in an eclectic museum, or busting literal ghosts. Later, your whole crew is jailed. Each stage has its own fully voiced animation, and the zany escalating stakes kept surprising me until the end.

To bolster the replay value beyond getting three stars on every level and checking off every bonus objective (which I’m not sure I’ll care to go back and mop up), you can also revisit the main levels with an alternate Time Attack or Destruction scoring criteria.

Time Attack is a test to see how long you can last, and every item shipped out extends your lifeline. It’s tough! Meanwhile, Destruction is all about swinging sledgehammers and pickaxes to break shit. It’s a nice bit of cathartic mayhem, but it’s honestly way too easy. We would three-star levels in Destruction mode with 40-plus seconds on the clock, whereas in the main story levels, we always needed every single second we got.

There are Versus levels, too, but that’s not our style. 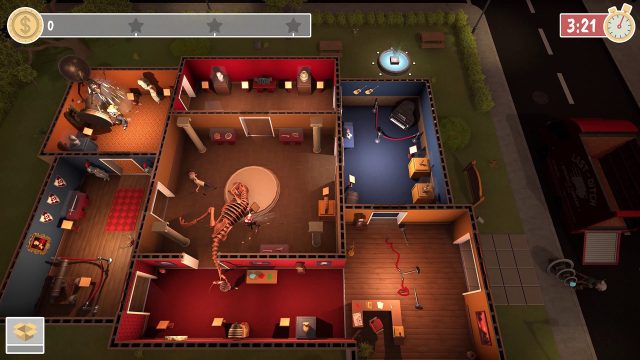 The PS4 version (played on a PS5) ran well, with quick load times, which is about all I can ask. That said, I wasn’t able to test online co-op for this impressions piece, and I wouldn’t recommend playing solo — this concept works best with a team. Two is plenty!

As much as I ended up enjoying the chaos and confusion of Get Packed, there are times when it could stand to be clearer — it’s not a particularly readable game — and there are moments that can feel unfair, like you didn’t particularly do anything wrong or out of the ordinary yet you still got punished. If you’re able to reach a (relative) state of calm, though, it’s a memorable co-op romp with lots of personality. Younger players should have a blast.

While not the biggest priority on my co-op recommendation list, it deserves a spot.