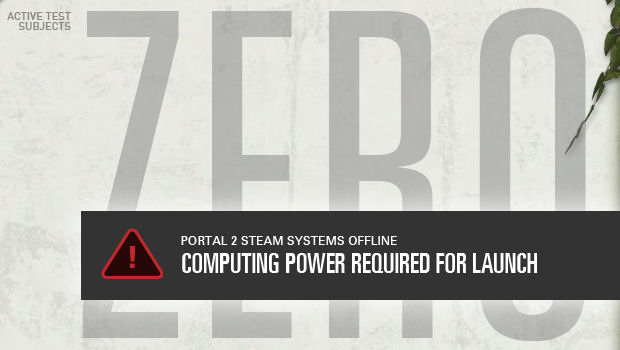 [Update: The countdown has hit zero and the results are … unique! Portal 2 might unlock early but Aperture Science needs more data to do it! A new site has opened that says you can “help unlock Portal 2 early” by playing the indie games featured in the ARG. The more CPUs playing the games, the more power there is. WTF!? Crazy stuff! Now stop reading this and DO IT!]

Valve loves to mess with everybody’s head, and the latest psychological trick is this mysterious Aperture Science timer, which is currently a few short hours away from reaching zero. Quite what it will lead to, nobody knows, but there’s a very strong guess.

That guess is that those who pre-ordered Portal 2 on Steam will get the game today. The Steam servers were choked last night with users desperately getting the game pre-loaded so that it would automatically appear on their computers the next day — and I have to admit that I was among them.

We’ll update this post when the actual truth it known, but remember, this is Valve. You can expect practically anything.