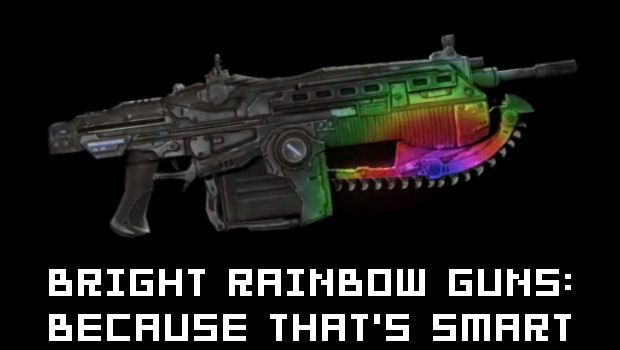 Launch day DLC is a subject that still remains raw among players, and Epic Games is planning to make that never even more sore. The studio has confirmed that twenty-one Gears of War 3 weapon skins will be available to purchase from tonight, letting gamers daub their guns in rainbows, flowers and all manner of silly colors.

It’s the net cost of the skins that have truly infuriated players, as it’s been deduced that the entire bundle of content will run for 3600 Microsoft Points. Of course, nobody has to buy them all, and nobody’s forcing anyone to buy a single skin, but nerds are furious, as the following quote demonstrates:

3600MS POINTS JUST FOR THAT SH*T? FUCK YOU CLIFF BLIZENSKI, YOU F*CKING GREEDY BASTARD. FOR TRYING TO MILK THD SHIT OUT OF GEARS3 3600MS IS PRETTY MUCH AROUND A $100. F*CKING TWAT ASS MOTHERF*CKER

Yeah … some people are upset. I’d find it annoying if the full game wasn’t already robust enough to justify the $60 asking price. Since Gears 3 is already packed with content, I don’t see these optional skins being a big deal. Not to mention, most of them look like a detriment to online play. It’s going to be a lot easier to spot and shoot the idiot carrying a rainbow in his hands.