Even as a huge fan of Twisted Pixel’s ‘Splosion Man, I had my doubts when it announced Ms. Splosion Man as a follow up late last year.

“So what? It’s ‘Splosion Man with a pink bow,” I thought to myself. “Well, that’s just great! Twisted Pixel are lazy jerkfaces and I hate their jerkfaces for being so lazy.”

Okay, so that’s not entirely accurate — even if that were the case, I enjoyed ‘Splosion Man so much that a pink bow and some new levels instantly had me sold. (The guys from Twisted Pixel also are not jerkfaces, I can confirm.) But what would the developer be doing to make Ms. Splosion Man feel like an entirely new game, versus a quick cash-in on a concept it had seemingly already perfected?

After seeing an early build of the game in action in San Francisco this week, I’m convinced: Ms. Splosion Man is a step up in almost every way. Women are, after all, the superior sex. (Shout-out to my wife — hi, honey!)

Ms. Splosion Man picks up where ‘Splosion Man left off. Big Science is celebrating its success after capturing its combustible experiment-gone-wrong, when an unforeseen turn of events gives way to a new threat: Ms. Splosion Man.

So yeah, lots of exploding. If you’ve played the original, you know how well Twisted Pixel was able to use a single gameplay mechanic in so many clever ways. With level design that made the game feel like a fast-paced puzzle platformer, the simple act of exploding was not only exhilarating, but a means of navigating complicated and challenging environments. 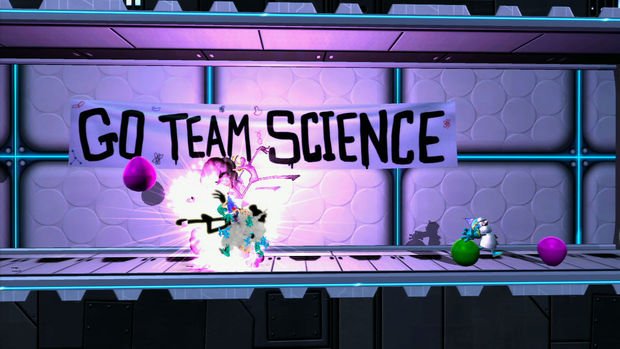 The great news is that all of that great exploding platforming is back. Even better, Twisted Pixel has added a handful of new gameplay mechanics that open up wild possibilities within the game world. I saw the title’s new ziplines in action, rails that Ms. Splosion Man can grab onto and use to speed across levels. There are moving cannons that she can hop into as well, obviously inspired heavily by Donkey Kong Country‘s barrel shooting. In another area, we saw trampolines, which Ms. Splosion Man bounced on in order to gain extra height and to reach new areas.

Mixed with the expected traps and objects like moving platforms and combustible barrels, Ms. Splosion Man looks to amp up the variety of gameplay substantially.

Speaking of diversity, Ms. Splosion Man branches out visually, as the incendiary flaming lady takes her adventure outside of Big Science’s laboratories. I got a look at the world outside of the sterile offices, including a futuristic city where Ms. Splosion Man dashed through the air, exploding across moving hoverers. Another area Twisted Pixel showed us was a resort, which featured its own color palette that made it stand out from the previous levels I had seen.

Oh, and then there’s all of the pink. Ms. Splosion Man, as you might expect, is stereotypically “girly.” That’s by design — completely tongue-in-cheek, and obviously over-the-top. The game’s theme song is a riff off of ‘Splosion Man’s, this time sung by a chorus of female vocalists. Instead of collecting cakes in each level, Ms. Splosion Man finds shoes, which she’ll then wear on her feet for the rest of the level. (Exclusive: Yes, there will be an in-game shoe model viewer.) Like her male counterpart, Ms. Splosion Man is frantic, dancing and constantly babbling — I heard her singing the lyrics to TLC’s “Waterfalls” and Beyonce’s “To The Left.” You know, stuff ladies like. 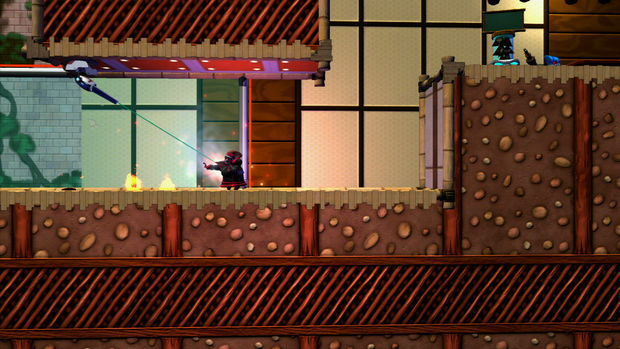 Fans of the chunky scientist and his “Donuts” theme song from the original might be saddened to hear that I didn’t see him during our demo. I did, however, get a chance to see what may be his replacement: Mandy the office manager. Based on Twisted Pixel’s real-life office manager, Mandy, she acts in very much the same way as the portly donut-loving scientist in ‘Splosion Man. Ms. Splosion Man can “hop into” her body and basically move her around like a puppet, using her to block some enemy fire and otherwise unavoidable obstacles. Also in the mix this time around is a scientist in a wheelchair, whom you can wheel into crowds of potentially dangerous enemies.

Big bosses are back, too. I saw the return of ‘Splosion Man‘s Mighty Eternal in our demo, a little worse for the wear after his tussle from the previous game. The battle utilized a mixture of zip lines, exploding barrels, and quicktime events (“Splode!”) as ways of defeating the mechanical menace. Twisted Pixel says with more time and more resources being put into Ms. Splosion Man, expect even bigger, badder bosses this go-around.

Ms. Splosion Man will feature 50 single-player levels, accessible from a Super Mario World-style overworld map. This not only looks better than the level-select screen from ‘Splosion Man, but allows Twisted Pixel to address difficulty issues from the first game. While the basic levels won’t be a pushover, players who want to avoid (or conquer) controller-tossing difficulty can easily spot it by looking for “red” worlds on the map. Many levels will even have hidden exits that will branch off to new areas, another nod to Super Mario World. 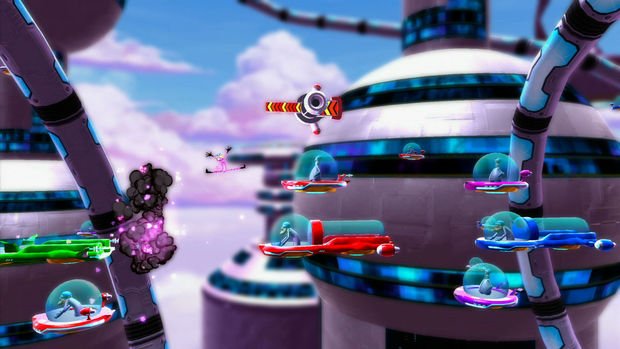 Twisted Pixel’s “f**k it, let’s put that in the game!” sense of humor looks to be returning in full force, too. Movie and cultural references were scattered all over the short demo, including two for fans of Arnold Schwarzenegger’s films Total Recall and Predator. Mighty Eternal even bellows, “I’m your boyfriend now,” a reference to dialogue from Wes Craven’s original A Nightmare on Elm Street.

There’s no date set for Ms. Splosion Man, as Twisted Pixel sets its sights on not only finishing the game, but finding a sweet spot for its release on Xbox Live Arcade. But between Ms. Splosion Man and The Gunstringer, fans of the studio (and explosions… and shoes!) have a lot to look forward to in 2011.