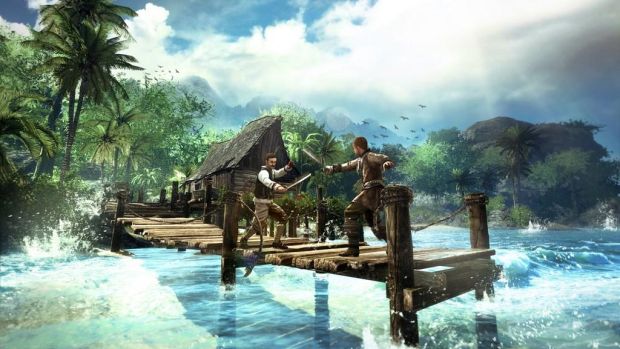 “Looks beautiful” is the first thing that popped into my head when I saw Risen 2 being played in front of me. Deep Silver put up screens of the first Risen 1, side by side, next to the upcoming sequel — the difference is basically night and day. A lot of work has gone into the character design, environment, and animation. Everything is significantly more detailed and realistic this time around.

Deep Silver also learned from their mistake with the last game in terms of the bad console port that was Risen. This time around, they’re doing multi-platform development between the PC and Xbox 360 from the start instead of later on in the development cycle.

Story-wise, Risen 2 focuses on the last remnants of humanity that have been eradicated by titans and monsters. It’s your job as the player to defend against these threats and travel to multiple islands in your quest. Essentially, the world is f*cked and you’re the key in helping fight back.

The hero you play as is a broken-down drunk, a sharp contrast to the hero from the first game. It’s a nice touch, and something I welcome as I’m sick of the perfect hero syndrome we always see in these types of games. So I don’t think I’ll be getting sick of the main character in the 40 to 60 hours it takes to play.

Risen 2 wasn’t playable, but the game looks promising based on this early look I got.