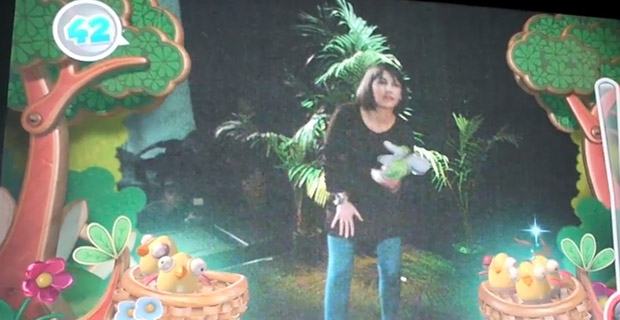 When I was watching Sony’s presentation for their motion sense enabled Move Party game this afternoon, I was kind of hung up on the person playing the game. She reminded me of someone, but I couldn’t put my finger on who it was. It was almost to the point where I wasn’t paying attention to the game.  I still haven’t figured out who she reminded me of, but for now, Amber Lamps makes a good stand-in. Can you see it? Maybe it’s the leggings.

As for the demonstration, this looks like a mix of EyeToy game play with a wand-style controller. You’ll see the controller take on other forms with some pretty slick overlays in the video. What you’re getting here is some casual, family style gaming. Swatting bugs, drawing triangles, shaving heads. What do you expect from something called Move Party? I appreciate that they’re showing off early Move tech, but I hope there’s something a bit cooler up Sony’s sleeve.