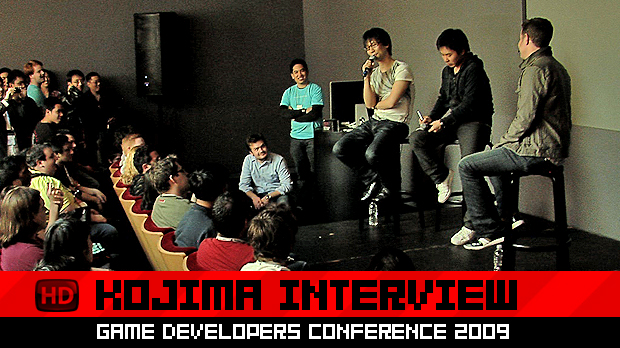 Did you know Hideo Kojima is an Apple whore? He said so when he made an appearance at a San Francisco Apple store on Friday.

Fans lined up outside just to get down. In fact, we heard that the first few people were in line from the early morning, and Kojima didn’t show up until about 3 p.m. They packed several people in on the top floor of this store, where the famed game maker appeared on stage. He was there to talk about his new game, Metal Gear Solid Touch. Fans in line got an iPod Touch case plastered with a MGST theme and Snake’s face. The whole thing was hosted by Geoff Keighley, who was either really run down or is not a fan of Metal Gear Solid at all.

Kojima talked about the game, fielded questions from the audience, and then was promptly stormed by fans armed with autograph-ready items. He signed one or two things and then got the hell out of town — the man must have learned a lot from his videogames as he seemed to disappear out of thin air. He probably crawled out of some air duct or something.

Hit the jump to check out the epic video interview. Hints of the next Metal Gear are dropped worse then Gecko’s poo.