I jumped on the Uncharted bandwagon late. Like, right before I left for GDC late. Even though I haven’t played through that much of it, I really like what I have seen so far. You can imagine my excitement, then, when I got to attend a seminar this morning hosted by Judd Simantov and Jeremy Lai-Yates (TD and Gameplay Animation Lead of Naughty Dog, respectively) on the (amazing!) animation techniques used in the hit PlayStation 3 game.

Unfortunately, the seminar was obviously for people that know a little bit more about game design than I do. The first thing the speakers asked was for all the game animators to raise their hands. About half the audience lifted their arms in the air. Next, he asked who were actual game designers, motion capture experts, or rendering artists. Right on cue, the other half proudly answered his call. After realizing I was obviously out of my element, I slowly turned my badge around and tentatively raised my hand. I guess I am a professional rendering artist for Destructoid.com now. Woo hoo?

Luckily, despite my lack of familiar company, the lecture was equally informative and interesting.

Hit the jump for a summary of the stuff I actually understood.

I apologize in advance if any of you reading this were looking forward to hearing about the intricate science of keyframe pipelines or how to accentuate animation timing. A huge majority of the lecture was dedicated to the admittedly fascincating technicalities of animating the characters in Uncharted: Drake’s Fortune, but I didn’t really understand most of it. What can I say, I’m just a simple dolphin-loving blogger.

Instead of trying to reenact the many different charts and graphs I saw during the hour-long presentation, I will just go over some interesting highlights that I hope most of you will find as interesting as I did (especially you fans of Uncharted). 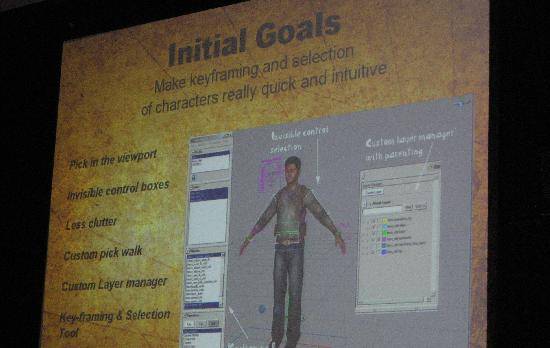 In a hint that pretty much confirmed there will be an Uncharted: Drake’s Fortune sequel, Judd talked about how Naughty Dog was trying to avoid some of the legacy issues they encountered with some of the company’s older main characters. Crash Bandicoot and, in particular, Jak completely changed appearances over the course of their respective series. Just look at the difference in the original Jak & Daxter and the most recent Jak X to see what I mean: 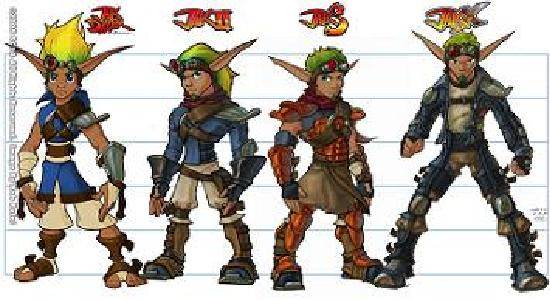 With the chracter of Drake, the animation team wants to make sure to keep him consistent in all future itertaions (Uncharted II!). Not only will this provide consistency, it will allow the same animation techniques to be used over and over again, cutting costs and making things a whole lot easier.

I wish I had access to some assets to show to the public, as the animators next talked about (and displayed) the early design ideas for main character Drake. To say they were ridiculous is putting it mildly. The first was a slender, unrealistically nimble man that reminded me a lot more of Ryu Hayabusa than the rough and tumble version that was eventually used in the final game.

The second was completley on the other side of the fence. This version of Drake had a huge upper body and tree trunk-like arms, looking more at home in something like Team Fortress 2. I think gamers everywhere should be very thankful that the perfectly realistic Drake PlayStation 3 owners have come to know and love was finally decided on.

After a large section of more graphs and confusing smart people talk (my brain was exhausted!), Jeremy got to the most interesting part of the entire lecture. 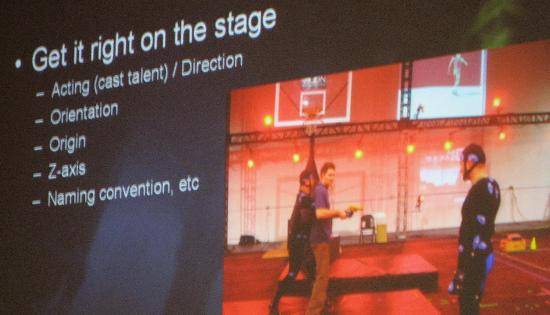 For those of you out there who have never played Uncharted, the game truly does have some extraordinary animation. The way Drake and all the characters realistically move is a true testamanet to the talent of the animators. Even if you have played the game, go back and really study the little details that make movements flow so seamlessly together: the way Drake actually breathes at different speeds relative to his situation is one magnificent example.

Well, most of this animation was obviously captured using motion capture (or mocap), a procedure that involves shooting real actors in front of a green screen with special sensors planted all over his/her body to track specific movement. I am sure most of you are familiar with this tried and true technique.

You would think a company as huge and successful as Naughty Dog (and, even more so, Sony) would utilize some of the best actors and technology the industry has to offer. What was so fascninating was something Jeremy liked to call “poor man’s mocap,” the technique the design team used for a majority of the animation.

In a montage of home videos, Jeremy showed the GDC audience that almost all of the motion capture actually used in the final game was shot right in the Naughty Dog offices. Yes, you read that right. Company employees, most all of them unprofessional actors or stuntmen, would be asked to engage in fake fights all around the cubicle filled space. Some flew back against bulletin board covered walls, others would leap off of desks, holding staplers and tape dispensers as guns. The whole segment elicited huge nerdy laughs from the crowd.

Later, when asked why this technique was used, Jeremy and Judd responded that it helped create animation that was more “realistic” and not tainted by certain things that actors will do unintentially (such as exaggerating a fall or overly flailing arms during an uppercut). Surprisingly, the “poor man’s mocap” technique worked great, as the sequences in which it was used in the final game looked flawless. 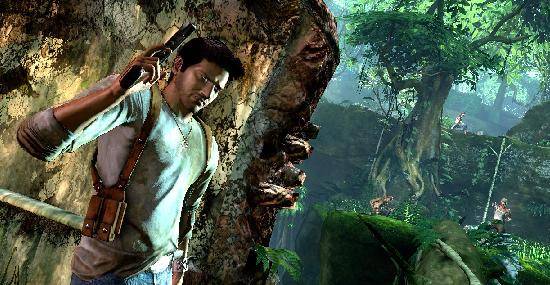 Overall, the seminar on the animation techniques for Uncharted: Drake’s Fortune was mentally exhausting, but offered enough interesting facts to keep my attention and make me want to learn more. Jeremy and Judd were very intelligent guys that obviously lead their field in producing some of the best and most realistic animation the industry has seen.

Even though I left a little dazed and more than confused, I think I now hold an infinitely higher amount of respect for the hard work that goes into making something almost as unnoticeable and seemingly basic as breathtaking videogame animation. The fine art of game design never ceases to fascnicate and impress me.