This one came out of the blue really.

We knew a touch about the plot for Inversion, which sounded vaguely like that of Half Life 2 with an alien invasion causing portals to appear all over the world unleashing chaos but that aside we were unsure of what we would find. So going in with little expectation I have to say I was very surprised by what I found at the Namco Bandai press area.

Read on and find out about this 3rd person cover based shooter with a twist from Saber Interactive.

The version we saw was in alpha so it wasn’t the final build by any measure and yet somehow it was impressive. The central premise of the game is that earth has been invaded by aliens with gravity manipulation technology. However, the aliens presence has also caused portals to open that are having a screwy effect on our world. You are part of a military ops team equipped with the alien gravity tech.

The game itself uses a custom version of the Havok engine that takes into account how things would operate in a gravityless environment as well as scenery destruction. The gravity tech works surprisingly well as a gameplay mechanic. For example, you can throw a ball of anti-grav and wherever it lands a force field where gravity doesn’t exist is generated within a short radius of the impact zone. The example that the team at Saber Interactive used was to have a group of enemies take cover behind some stone bollards. When the anti-grav orb hit and generated its field, the enemies were lifted from their cover completely exposed to you and your team’s gunfire. 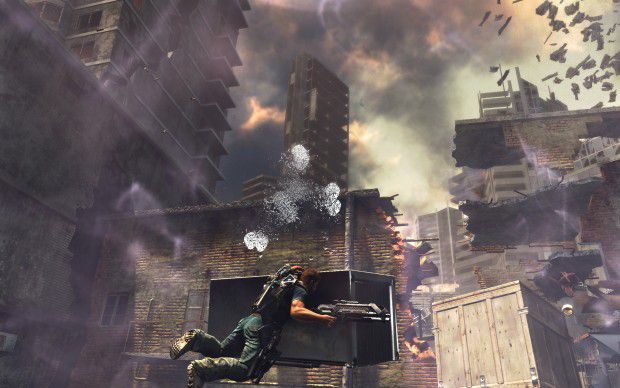 When enemies are lifted in to weightlessness they are disoriented for a few seconds before regaining their bearings and returning fire. This will also effect the player in the same way. Any objects or items caught in the anti-grav field can also be dragged from it, manipulated and thrown. Random detritus found in the level can be thrown at enemies and when your powers level up you can pick up heavier items found in the level (for example, a car) and place it somewhere to use as ad-hoc cover.

Some gravity based events cannot be controlled, sometimes random shifts in gravity will happen and you’ll end up flipped onto another part of the environment. We were shown a battle that started out on the street as enemies running from the debris of collapsing building caught sight of us and opened fire. Then a gravity wave hits. The action then shifted onto the sides of the buildings instead with shop signs providing impromptu cover. The gravity wave only has a limited area of effect and at the very edge you will encounter enemies who are unaffected. You can still fight these enemies and items like grenades can still be thrown, however their trajectory will change depending on what side of the wave it is on.

Not everything is gravity battles as the game will feature some pretty big set piece battles that will put the Havok engine through its paces with everything from pillars to wholesale building fronts falling apart. 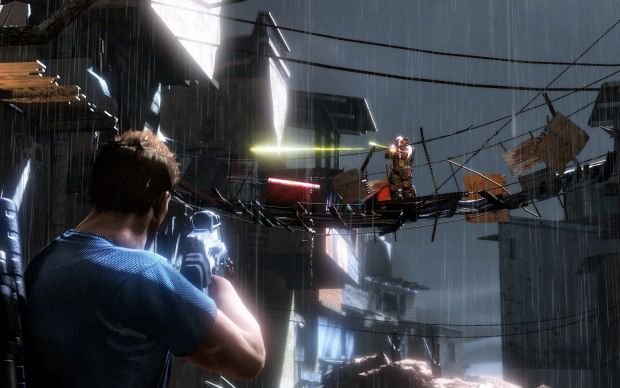 It feels like this will be a very fun game, with good use of the anti-gravity mechanic. One thing that was very interesting, though we didn’t get to see it in action, was that the game is being built from the ground up as more of a co-op game. There were moments in then demo we were shown that had you interact with an AI partner but I can only imagine what kind of gravity defying shenanigans two players working as a team could get up to.

The example I’ve been using to get the idea of this game across to people is to say that it reminded me very much of the PS2 Midway game Psi-Ops: The Mindgate Conspiracy. A very simple, action-based, third-person shooter with a very fun, gimmicky gameplay mechanic that is a great deal of fun to play around with. It’s too early to call this a must buy game when it sees release, but it really might be worth keeping an eye out for in future.