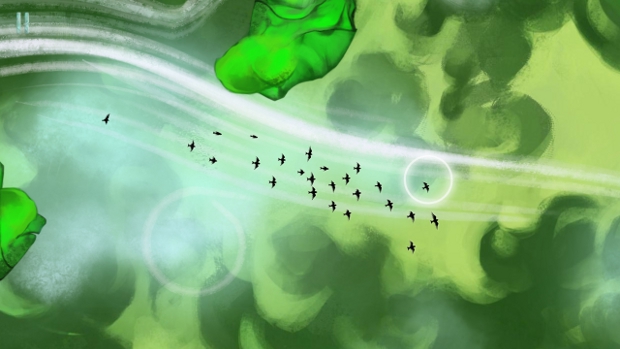 Gathering Sky, a game from indie studio A Stranger Gravity about controlling a flock of birds, released on Steam, iOS, and Android today. I got a chance to play around with the Steam version this week, and it’s a pretty neat little adventure.

The player starts out guiding a single bird across the sky, with beautiful painting-like landscapes far below accompanied by a nice orchestral score (performed by the San Francisco Conservatory of Music). As the bird flies along, it can attract other wandering birds to join its flock, eventually amassing a huge group of feathered friends for the journey.

The basic goal is to keep flying east, but there are many distractions along the way, including hidden bird friends to find, strange orbs of light to catch which react to nearby crystals, air currents which increase flying speed, and hazards such as giant birds of prey, thunderstorms, and rock formations which can scatter your flock. Exploration is optional, but it’s also essentially the main draw.

Gathering Sky feels similar to games like Flower, or even Proteus. It may be less goal-oriented than Flower, but both games are heavily based around relaxation and exploration. Basically, it’s the type of game you might want to mess around with to unwind after a stressful day, since it doesn’t require a whole lot of skill or thought but rather an appreciation of beauty and peacefulness.

For gamers seeking puzzles or action, it might be better to look elsewhere. But for those just looking to relax and enjoy an easy-going adventure, Gathering Sky is not a bad choice for the $5 price tag ($3 for mobile).