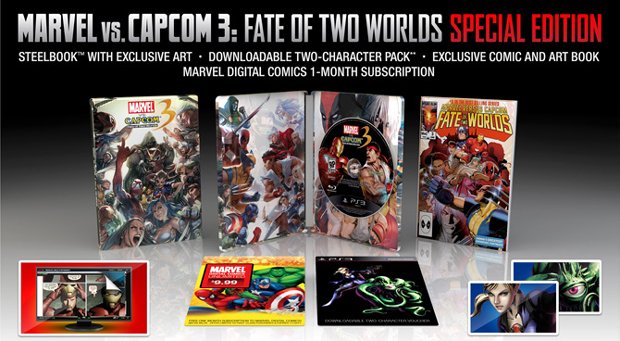 Marvel vs. Capcom being a special franchise in the hearts of many gamers, it seemed likely that there may be some sort of extravagant collector’s edition packaging to get consumer mouths extra frothy. Now, GameStop has listed one such edition though it is far more modest than it might have been and quite appealing.

The special edition release of Marvel vs. Capcom 3: The Fate of Two Worlds comes with a steelbook case with exclusive art, a prologue comic book and a one-month subscription to Marvel Digital Comics. And then, a month after the game launches, you’ll be able to use the included codes to get downloadable characters Jill Valentine and (my personal favorite) Shuma Gorath.

Awesome. The whole package will run you $69.99 which seems pretty reasonable to me. In addition, GameStop is offering a couple of decals as a pre-order bonus but, in the face of the awesome up there, those barely even rate.

Finally, there’s also a release date listed for the game: February 15th, 2011. Nothing official from Capcom yet, so we can’t say with certainty if that’s the final date but we’ve contacted them asking for a statement.

Filed under... #Capcom#GameStop#Marvel vs Capcom