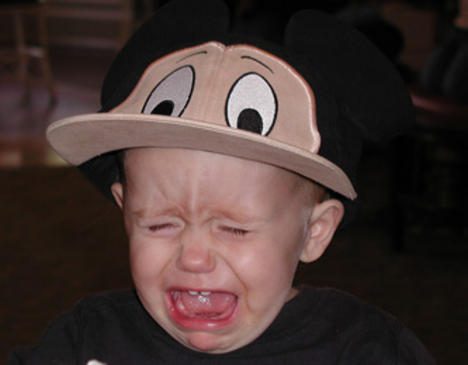 Nintendo fanboys have had their collective Mario panties all in a bunch lately thanks to a game review that didn’t say, “ZOMG ZELDA BEST GAME EVAR!” It seems that if you have one honest opinion about a game — specifically a Nintendo fanboy’s golden cow — then you are subject to Internet wrath that has always been feared among a throng of gaming journos.

GameSpot has actually sunk to the low levels of gaming blogs and responded to the criticism by saying, “Hey, you suck!”

Since I know people are upset about the review (which is odd considering how few people have played this game at the moment), I figured I’d share some opinions based on playing through the first five hours or so of the game.

It’s the same damn game we’ve all been playing for the last 15-odd years. Hey, guess what? You get to go into dungeons…and find items…and put together pieces of heart to make new heart containers. I haven’t gotten very far into it, but I’m going to go out on a limb and guess that Triforce is in the mix at some point.

More crybaby tactics after the jump.

There’s a difference between tradition and ossification, and Nintendo’s been content to let this series stay the same for too damn long. What’s more, in a lot of ways it’s actually getting to be pretty annoying. The helper characters, in particular, seem to be intended to be cute, but they wind up being maddeningly insufferable. In a lot of ways, Midna, the helper character from Twilight Princess, is even worse than Tingle from Wind Waker. And I don’t know whose idea it was to make the first dungeon in the game feature a large number of monkeys that follow you around making incessent monkey noises, but they should be shot. Most annoying. sound. ever. When you have the pointer active, it also makes a shimmering sound as you move the Wiimote around. It never ever stops making this sound, and it got so damn annoying that I simply turned the pointer off completely.

Since every game in this series is more or less the same, outside of minor details, choosing among them is more or less a matter of deciding which style suits you best. Wind Waker had, at the very least, a graphical sensibility that was unique, whereas Twilight Princess just seems…generic. For a game that plays up its theoretically realistic graphical style, it also has to do a bit better job of representing the world; it’s fine that the Wii isn’t as powerful as a 360 or a PS3, but at the very least it should be capable of matching the best-looking games on the GameCube.

From top to bottom, Twilight Princess is a game that was transparently designed for the GameCube and hacked to work on the Wii. The controls feel kind of shoddy in a lot of ways. I guess what disappoints me most about this game is the lack of ambition and innovation. The Wii has some promising ideas behind it, but if they’re content to have their flagship title be Just Another Zelda Game(TM) then they’re getting off on the wrong foot.

I guess if you like the Zelda formula, then you’ll like this game. Speaking for myself, though, I can’t imagine how anyone really gets excited for them anymore; the recycling of game mechanics ventured into self-parody territory years ago. I really think the series needs to take a cue from Resident Evil 4 and reinvent itself completely. Heck, even the Final Fantasy games manage to make some big changes to the series’ conventions with each installation. As it is, everything about Twilight Princess, and pretty much every game in the series aside from The Adventure of Link, smacks of Nintendo being content to play it safe with their big-money series. Give me something new!

Agree, disagree? Debate it to death!