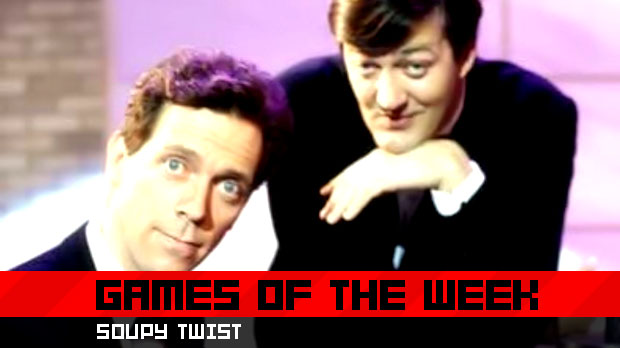 Most of you will know Fry & Laurie as “that LittleBigPlanet guy” and “that House guy” but I know them as a pair of very talented humorists who had a terrific sketch show known as A Bit of Fry & Laurie. As an example of their wonderful comedy, I have provided a video this week of one of their most brilliant sketches, the Michael Jackson interview. The sheer genius of it cannot be understated and it can be viewed post-jump, with a high recommendation that you do.

Also, videogames happened in the general sphere of our lives this week. Hit the jump to see what the Dtoid crew has been playing, and please do share your own gaming week with us!

Bennett: Wrapping up Plants vs Zombies for review, which I can finally talk about on May 5th (and I can’t wait to talk about it!). Playing Hammerin’ Hero on and off, which is both adorable and frustrating, nursing my newfound Diner Dash addiction on both the 360 version as well as on my iPhone, and dabbling around with Silent Hill Origins on my PSP again. Thinking about picking up Velvet Assassin this week too, depending on what I hear about it this week.

Colette, I love you, and I can’t bear to see you make that horrible, horrible mistake.

Bennett: Oh no. Man. I was hoping it would be good 🙁

Sterling: Your hopes better be made of magical wishdust and fairy’s vaginal fluid then.

I finally finished Valkyria Chronicles for the PlayStation 3. Simply put, it is one of the greatest videogames I have even had the pleasure of playing. I loved every minute of it.

Also started on Pikmin for the Wii (BEST SERIES EVER!) and The Dishwasher: Dead Samurai for Xbox Live Arcade.

Grigsby: Well so much for hoping that Jim would at least give it a moderate score. What, you don’t like the singing Nazis? That my favorite part 😉

I’ve been playing Earthbound for the SNES. I haven’t really been playing much of anything else, though. My 360 took a shit a few weeks ago and I never realized how  much I actually played it until it was gone. As for my Earthbound update, I’ve gotten to the third town and proceeded to go into the weird cave where you kill the slime boss. I got totally owned the first time playing him because I had no idea that feeding him the honey item would benefit you, I had figured that it would heal the bastard. After dying once, I used the honey item on the boss and beat him like nothing. Then I went to sleep.

Grim: Picked up Pure and Silent Hill: Homecoming for a cool $10 each last week, and I’ve slowly been making my way through them. They have been really enjoyable so far, but another game I recently bought on the cheap, Condemned 2, has been much harder for me to get into.

Sterling: As you could already have guessed, I’ve been playing Velvet Assassin this week. Let’s wait for the official review, but right now, it’ll be a miracle if I can even bring myself to reach the third level. I’ve also been playing Resistance: Retribution for a late review, and while I appreciate what they’ve done so far as bringing a console experience to a handheld, the way the game constantly breaks its own rules is infuriating. The big review game this week, however, has been X-Men Origins: Wolverine, which is one of the best licensed games I’ve ever played.

Outside of that, you can bet your arse it’s been even more Killzone 2. I’ve finally unlocked the Air Support badge and am now working on getting the Engineer badges. After that, I just need to get a handful of Sport & Mark ribbons then work on Assault Class and I’ll have earned all class-specific badges. Then it’s onto mopping up the pure luck stuff, like Assassination ribbons and the fucking pistol ribbon that I’ll never get because fuck the pistol.

Holmes: Finally started in on my own game of Resident Evil 5. Man, what a weird game to play single player. And by “weird” I mean “stupid”. Sure, it’s a crap-of-a-time to be forced into escorting a near-defenseless, A.I. controlled character, but watching one beat a game for you may be an even worse experience. I can’t believe I’m saying this, but RE5 single player actually made me miss the Ashley-escort missions of RE4.

Also started in on Klonoa for review. So far, it’s worth the $30, but it’s nothing that could be used to convert non-fans of cute platformer genre into the fold. The same can’t be said of Spewer, a new game by Edmund McMillen and friends that should be hitting New Grounds any second now. Mr McMillen gave me a preview copy of the game earlier in the week, and I love it. It’s about a cute little test-tube experiment who has to traverse various obstacles by jumping, projectile vomiting, and eating its own vomit. It’s even better than it sounds.

Davis: I wish I was playing Klonoa. My Gamestop didn’t have it early. Grumble.

Instead, I’ve been making my way through Banjo-Tooie on XBLA for review. This is my first time playing it, and I must say, the gargantuan amount of *stuff* in that game is overwhelming. Nine hours in and I’m still not really sure if I like it more than the first game.

I’ve also been getting through Secret of Mana and Rhythm Tengoku Gold (why did I wait so long to play this? I love it!) during my spare time, and also keeping Jon company in Animal Crossing: City Folk.

Niero: I can’t remember the last time I played a casual game as good as Plants vs. Zombies.  I’ve put at least 40 hours into it and loved every minute of it.  11/10!

Razak: I picked up the DS version of Quantum of Solace for ten bucks and I’m playing through that. Only a few levels in but so far it’s got some good ideas excecuted poorly. That’s the case with most rushed games for movies though.

Sarkar: I hadn’t been playing that many games at home this past week, but that all changed on Friday, when I — along with Dtoiders Superflossy, casualweaponry, and Cataract — headed down to Baltimore for a massive DtoidBaltimoreDC NARP! (Technically, though, it was an “ARP”; today is Topher’s birthday! Yay! HAPPY BIRTHDAY, TOPHER!) I want to give a humongous shout-out to Hitogoroshi for hosting the madness (and all of us, for two nights) in his awesome house.

The game of the ARP was definitely Street Fighter IV — many hours were spent watching people spam Shoryukens. I happen to suck at the game, but I’m going to blame the fact that the game was being played on a 360. I’m not very good with arcade sticks, and of course, the 360 controller’s D-pad is nigh-useless. I’m at least semi-competent with a PS3 controller in my hands.

We also played a ton of Rock Band, naturally. I must say, the drums on “Sunday Morning” by No Doubt are really fun. And thanks, Topher, for the backing vocals on Jimmy Eat World’s “Sweetness”! I even managed to get AgentMOO to purchase 3 on 3 NHL Arcade on his 360, and I then proceeded to own ScottyG and others. Man, that game rocks. Many other games were played, such as Power Stone on the Dreamcast and Waku Waku 7 on the Neo Geo, but really, much of the weeked was a blur. Just know that it was awesome.

Side note: after all the hate for sports games that I dealt with this weekend, I think I’m going to play a lot of them this week as a backlash.