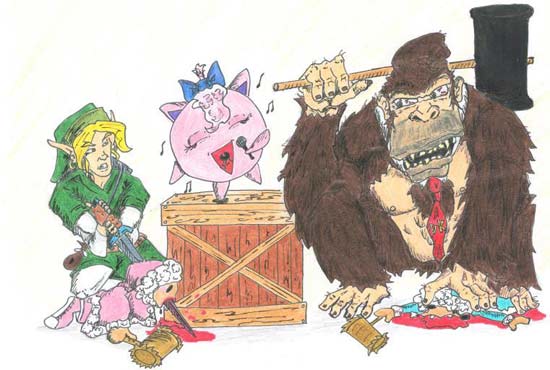 Last week‘s debate was a brawl between the twenty-five masters of Super Smash Bros. Melee. Some cast characters didn’t do nearly as well as others, but the race for the only trophy that matters was close. Who did we decide was the best fighter of them all? Here are the ones who received six or more votes:

This week we travel way back to the days when some of the most popular PC games were the ones that came with the computer. A time when Windows 95 continually presented us with the dilemma on how to best prevent boredom at work or school: with SkiFree, or with Rodent’s Revenge? It was an age when games on a computer no longer implied that a deck of cards were involved, and when using guns and gore graphics to kill time wasn’t yet prevalent, but soon would be.

The two games contained completely different game mechanics and goals, but they were equally addictive at the time. Which game did you play more, and why? Give us a reason for your decision, get some coworkers to give their opinions as well, and check back next week for the Windows 95 winner. Say Solitaire and you die.

[Thanks to MrJunko for the awesome art you see above.]