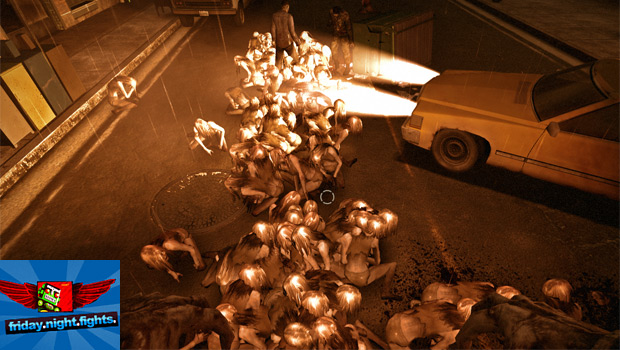 Hooray! The Left 4 Dead Survival Pack is out, and it’s way more fun than it ought to be! Plus, it’s absolutely free. I think you all know what that means. Friday Night Fights + Survival Mode + Dead Air/Death Toll in Versus = a match made in heaven.

Personally, I have yet to even touch the new campaign additions to Versus, because I’ve become obsessed with trying to obtain gold medals. So far, not once have any of my teams made it past the “two tanks at once, OMG F’ING RUN!” mark, unfortunately.

For anyone who’s played the majority of the Survival maps, which is your favorite? I’d have to go with the hospital; it’s a ridiculous choice, I know.

Quick guide to Friday Night Fights for fresh meat: Each week, a bunch of Destructoid readers and usually an editor or two get together to play some videogames online. Simple enough.

The planning for FNF takes place in the forums, where Dtoiders volunteer to host by dropping their information (gamertag, time, game, etc.) in the forum post corresponding to the system they’re interested in playing on.

Then, every Friday, reminder posts for those who don’t pay attention to the forums (the scallywags) go up in the community blogs section. And for those who are too lazy to read the blogs, they have got my weekly recap posts which bring all of the FNF-related details into one unified place.

From there, all you need to do is shoot a quick message over to one of the hosts listed below asking for an invite, or simply force your way into the room. Whatever works.