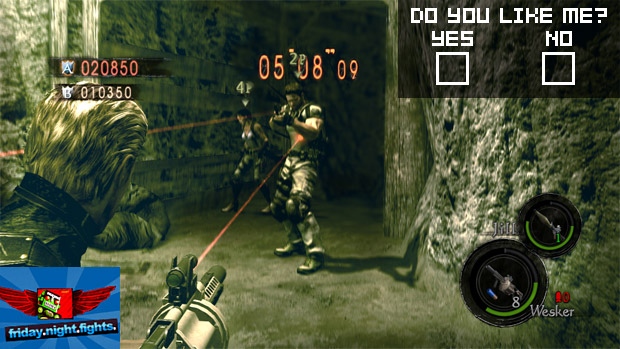 This is probably the wrong channel for this sort of question, but I’m mad as hell and I’m not going to take this any more. Actually, scratch that — for the first time in quite a while, the weather isn’t complete sh*t here in Michigan, and I’m not mad at all. It was an honest mistake.

But I am curious to hear what you guys think about the Resident Evil 5 Versus mode DLC that Capcom put out a few weeks back. It’s hard to tell if the the lack of discussion about it on Destructoid is indicative of the premium download’s success or failure, so I thought I would pop the question here of all places.

Personally, I love Mercenaries, and I’d love to have that shared experience with more than one other person at a time. My concern is that RE5 simply isn’t suited for competitive multiplayer, and it seems like many people are wondering the same thing, yet none of us have had the cojones to try it for ourselves.

Quick guide to Friday Night Fights for fresh meat: Each week, a bunch of Destructoid readers and usually an editor or two get together to play some videogames online. Simple enough.

The planning for FNF takes place in the forums, where Dtoiders volunteer to host by dropping their information (gamertag, time, game, etc.) in the forum post corresponding to the system they’re interested in playing on.

Then, every Friday, reminder posts for those who don’t pay attention to the forums (the scallywags) go up in the community blogs section. And for those who are too lazy to read the blogs, they have got my weekly recap posts which bring all of the FNF-related details into one unified place.

From there, all you need to do is shoot a quick message over to one of the hosts listed below asking for an invite. Or force your way into the room. Whatever works.