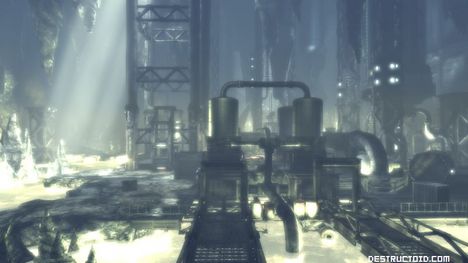 Microsoft has sent word that four new Gears of War multiplayer maps will be available for download this Thursday, May 3. The map pack, known as “Hidden Fronts,” will cost players 800 Microsoft points until September 3, when they will become available for no cost.

The maps, predictably, look absolutely stunning. Even a grumpy, bitter old gamer like myself thinks that, for someone who plays Gears of War regularly, 800 points ($10) is reasonable. Of course, free is even more reasonable, and patience is a virtue.

But let’s be real — the first time you can’t join a game because you don’t have a map, you’re going to be reaching for you wallet. It’ll be like a virtual stick-up.

Details on the individual maps can be found after the jump, with images in the gallery below.

Bullet Marsh: In this Kryll-infested swamp, an old generator still powers the area lights. A few stray bullets could easily knock out the generator, leaving combatants to fend for themselves against the Kryll.

Garden: This overgrown and crumbling conservatory still has a working fertilization and pesticide system. This system can pose a serious hazard to anyone who ventures into the greenhouse without first venting the air.

Process: Teams must fight for control of this subterranean Imulsion processing plant, still active despite the cessation of the Pendulum wars.

Subway: Timgad’s Central Subway station used to serve as a central hub for commuters. Now the tunnels are crawling with Locust.