If you’ve put in a few hours into Marvel Snap, the new competitive card battler from developer Second Dinner, chances are you’re starting to see some pretty powerful cards pop up in your collection. If your collector’s level has hit 222, you’ve officially hit Deck Pool 2. Marvel Snap divides its cards into a variety of pools, including starter cards, the predetermined cards of Collector’s Levels 1-14, and Deck Pools 1, 2, and 3, which reward players with new cards in a randomized order. If you’ve reached Collector’s Level 222, your deck is about to expand in new and exciting ways.

Here are the cards you’ll unlock in Deck Pool 2, which covers Collector’s Level 222 through 474:

We’ve already given you some ideas for building a good deck out of Deck Pool 1 cards. For this post, we’re looking at Deck Pool 2 and which cards work best with those you’ve already unlocked. All four of the decks listed below were used in Deck Pool 2 (and Deck Pool 3) with multiple wins under their belt. Consider these decks guidelines for helping you build your own unique deck as you work your way toward even more powerful cards in Deck Pool 3. A Deck Pool 2 Destroy/Discard Deck is pretty similar to the one used in Deck Pool 1 with the big difference being the addition of Bucky Barnes. When Bucky is destroyed, he’ll be replaced by the Winter Soldier, who carries a 6 Power compared to Bucky’s 2 Power. If you play Bucky before you play your Nova card, Nova’s destruction will add +1 Power to Winter Soldier when destroyed. If you play Nova before, that power will be added to Bucky Barnes instead and will be erased should it transform into Winter Soldier.

Like with the Deck Pool 1 Discard/Destroy Deck, having Angel in your hand is helpful as he’ll either fly in from your deck when a card is destroyed or can be used as easy fodder for your Carnage. However, I prefer to stick Quicksilver in my deck as it gives me a better chance at maximizing my Carnage’s power. To best ensure your Destroy Deck has enough opportunities to work, add both Carnage and Deathlok to your deck as well as Wolverine and Sabretooth. 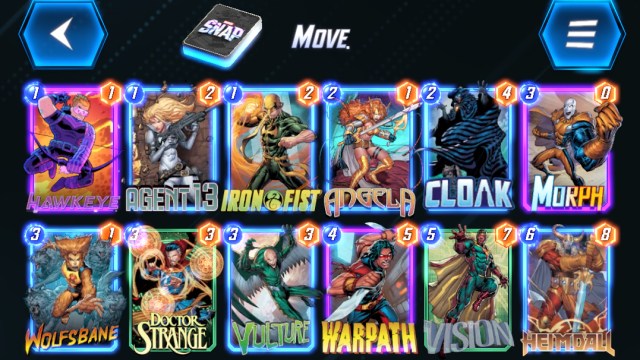 Vulture can be a serious weapon in Deck Pool 2 if you have the right cards to pair him with. Thankfully, Deck Pool 1 should have given you a few cards that will quickly power up this Spider-Man villain, including Doctor Strange, Iron Fist, and Heimdall. Deck Pool 2 introduces Cloak to the bunch, potentially giving your four opportunities to move Vulture, giving it +20 Power or more in the process.

Careful planning is required for a Move Deck if you opt to include Warpath, who gains +4 Power if you have an empty lane on the game board. Tricking your opponent into putting their best cards on the right-hand lane before moving all your cards left with a Heimdall could give you more than enough Power to take the left-hand lane and center lane for the win.

An alternative version of this deck switches out Warpath for Multiple Man, who can be a boon if you’re able to move your cards several times in a match. 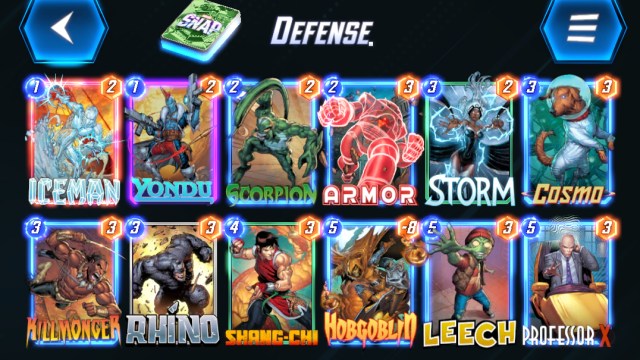 It’s often said the best offense is a good defense and Deck Pool 2 gives you a lot of options to counter your opponent’s plan. If you have a good understanding of the available cards and basic strategies people in Deck Pool 2 use, you can put together a deck that’ll destroy your opponent’s attempts to rack up huge points.

Some of the vital cards in this deck include Leech, Professor X, Scorpion, Rhino, Armor, Hobgoblin, Cosmo, and Killmonger. If played well, don’t be surprised if you get more than a few people Retreating when they see you’re leaving them with zero options.

If you want to try an alternative version of this deck, switch out Rhino for Elektra to take down any 1 Cost cards that are played after your Killmonger goes out. 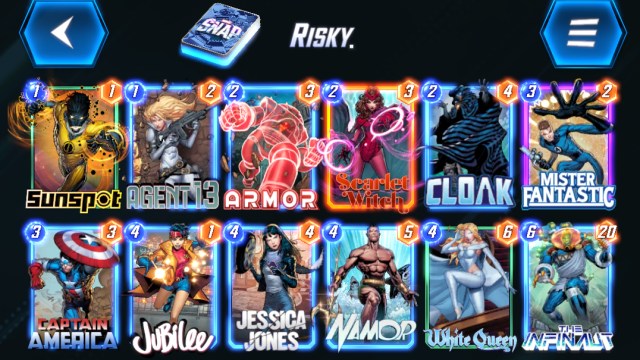 There are a few cards in Deck Pool 2 that are high-risk/reward. Take The Infinaut, for instance. This card can only be played if you didn’t play a card in the previous round. If you can manage to make that happen, you’re nearly guaranteed to win whichever lane you play him in. He makes a good duo with Sunspot, who gains +1 Power for each point of unspent energy in a round. If you skip round five, you’ll add +5 Power to your Sunspot while opening up the opportunity to play The Infinaut.

However, things can go awry. If your opponent has a Morph, they can potentially take the form of The Infinaut. Killmonger can easily take out your Sunspot, possibly leaving you in a bind for rounds 5 and 6. There is a lot that can go wrong, but if you want to chance it, give this deck a try and hope for the best. For an alternative version of this deck, switch out Mister Fantastic for Morph to add even more risk/reward to the deck.