Raindrops keep fallin’ on my hood

When I looked at my E3 schedule this year and saw I had a Forza Motorsport 6 meeting at the Microsoft booth, I expected they wanted to talk to me about cars. That’s the crux of Forza after all: cars racing really fast and looking really pretty while doing so. Oh boy, was I ever wrong.

Well, half wrong to be fair. There were the obligatory one-liners about 450 different vehicle, customization, cockpit views, yada yada yada. But, it didn’t take long before Ryan Cooper of Turn 10 began chatting about the Forza Tech engine and one thing that it supposedly does really well. That one thing is rain.

Cooper said that Turn 10 “deconstructed rain” in an effort to provide a “precise and immersive experience.” The developer’s really focusing on physically-based materials for Forza 6, and a significant portion of that has to do with the way cars interact with water.

The rabbit hole goes so much deeper, though. Forza Motorsport 6 has 148 different surface types, all of which react uniquely to water. They each have their own characteristics regarding porousness, meaning that rain will absorb into the ground or pool up on the race track depending on the surface. 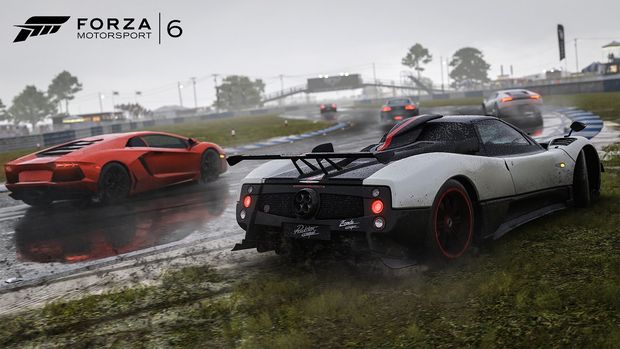 Did you think the rabbit hole ended there? Turn 10’s not offering water physics just anywhere — only in the places that it makes sense. An example Cooper gave us was that it never rains in Dubai so players will never see rainfall there. From our understanding, there isn’t even the option to set up a custom race with rain on that track.

If Turn 10’s obsession with water sounds a bit like overkill, well yeah, maybe it is. It got to the point where another journalist and I just said “Rain” to one another whenever we crossed paths for the rest of E3. I attribute it to what I call the “EA Sports Complex.” The racing in Forza has been carefully honed over the course of a decade now. Just like EA Sports and its titles such as Madden and FIFA, Turn 10 can afford to focus on the smaller facets of its game in an effort to inch ever closer to realism.

We have no real indication how well all this rain will actually turn out. The hands-off demo we saw looked great, but it was obviously a tightly-controlled environment. Notably,Project CARS attempt at rain was where the game was visually at its best, but it also took a significant toll on the Xbox One and caused gameplay issues. If anyone has the best chance of skirting that problem, it’s Turn 10 who’s a first-party developer and presumably has the full support of Microsoft’s resources. If the game isn’t optimized well enough to handle all these effects, you’d have to assume they wouldn’t be such a priority — not yet, at least.

Rain usually means gloom for most people in real life. Turn 10’s pinning its hopes on rain making for a fun and realistic experience in its video game. After all, who doesn’t love speeding through giant puddles? And, all that water should have those cars at their absolute shiniest.