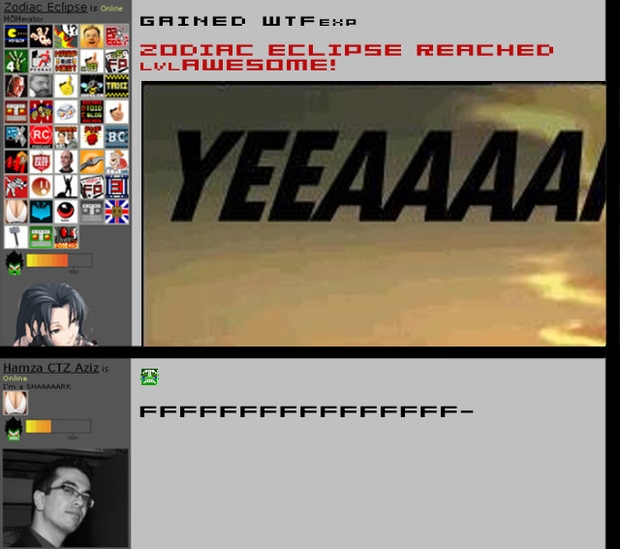 This past month, Bro-mania infected the forums, Zodiac Eclipse went mad with power, community members got some props in the Dtoid Comic, a new moderator appears, and other things happened.

What were these mysterious “other things”? Why I thought you’d never ask!

As can be seen above, CTZ discovered you do not mess around with Zodiac when it comes to badges, for she is subtle and quick to anger. The thread doesn’t have quite the impact it originally did since everything has been pretty much restored to normal, with one exception: Zodiac now wields the mighty Admin badge, and deservedly so. I can’t even begin to describe what an enormous help she’s been to me with the Forums over the last two months. So I won’t.

The most brotastic craze in the history of the Brorums came out of nowhere (bro-where?), uniting all bros together in the name of brodum. If that last sentence gave you the urge to punch me in the face, I don’t blame you in the slightest. In honor of this brosomeness, a Traveling Brournal is being mailed around to various bros so each can contribute a drawing. Details on how to participate and scans can be found in the thread!

Of course there’s a bro-related badge coming in the near future, just in time for it to hit old meme status. If you happen to be getting together IRL with other Dtoiders, be sure to take a picture of any spontaneous brofists that are certain to occur. This will be useful very soon. So please stop asking about it!

In case you missed it the last installment of the Destructoid Comic featured the introduction of Technophile’s squad of ultimate badasses, Broforce: Solgrim, Sam Spectre, Serpentish, and Poopface Morty. What will the future hold for our heroes? That is for you to decide!

While we’re on the topic, the Destructoid Comic finally received a long overdue badge of its own:

This is given to those who have had their actual likeness featured in the comic. Before you ask, avatar cameos don’t count! Mikey gets the final say on who is awarded the badge, just so there’s no confusion.

Gobun and Gyreal’s ridiculous bromance/rivalry has brought laughs to many and single-handly doubled the sales of Mind Bleach this past month. Here are some of the Forum Adventures highlights.

In case you still haven’t earned the Four Year Anniversary badge, well you’re too late. The window has officially closed, but you’re still welcome to share your favorite Destructoid memories!

The Bar thread remains one of the most active threads on the forums, and recently hit its 75000th post!

Gyrael hit the 10,000 post mark, making him the only forum member besides Poopface Morty to reach this milestone. Congratulations to both of them on having way too much free time!

Ali D is already so awesome he inspired the Random Act of Kindness badge, but his contributions to the Forums over the years led us to feel he was a great choice to be a Moderator. So tell him congratulations if you haven’t already!

I wanted to take a moment to spotlight a few of the unofficial community-driven podcasts you may or may not be aware of. Podsumaki is dedicated to fighting games, Sega Addicts caters to those addicted to Sega, and 321gocast is pretty much about everything and nothing at the same time. Give them each a listen when you have a chance! Speaking of 321gocast, they were recently granted their own Forum badge:

Wish your community podcast had its own badge? Continue to record and release episodes, and before long you’ll qualify!

Were you aware that May is Zombie Awareness Month? Not only is it a good time to get your survival plan in order, but you should also check out the Zombie thread for helpful advice on how to survive the looming apocalypse and discussion of the living dead.

To celebrate the release of Super Street Fighter IV, Solgrim was kind enough to give the Friday Night Fight badge a Dudley-inspired update:

Finally, thanks as always to Zodiac, IcarusKills, and Ali D for their help keeping the Forums under control, and to Hamza for being Hamza. Also, congrats to Anthony and Ashley!

Anything I missed, or more likely left out due to this being way too long already? Feel free to mention it in the comments!