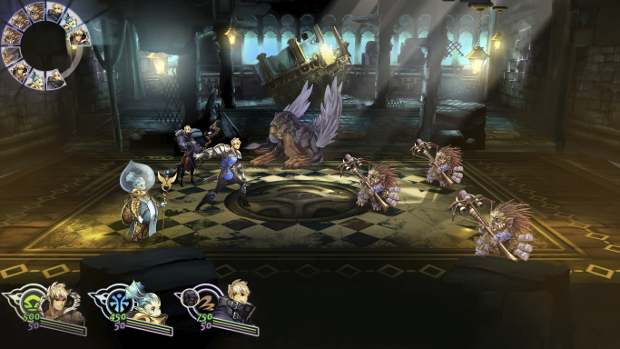 Kobojo, which has Paris and Scotland-based studios, started as a social game developer, but has since shifted focus to developing high quality role-playing games for mobile devices. It is showing Zodiac at TGS on iOS and PlayStation Vita, but there is no lead platform for the loose 2015 release date.

CEO Mario Rizzo explained that things like platform and price model will need to be worked out on the business side. “It could be Xbox,” he said, and noted that it is a Unity game so PC and console versions are all viable (it was being demoed with a controller). Cross platform compatibility, too, will be completely dependent on platform holders, as there are “no technical restrictions” on being able to play the game on your phone, then pick up the same character on your Vita or elsewhere. “Only business restrictions,” Rizzo said.

The demo we were shown had you flying on a gryphon through a gorgeous, 2D overworld where you can loot chests and other items. Enemies were represented on screen as black, white-eyed shadows, not dissimilar from Persona. Bumping into one started a turn-based battle, which included the player character, a support character (the lil shorty)  in the foreground and a multiplayer ally in the background.

There are twelve classes based on the zodiac, all attached to four different elemental advantages and all representing typical RPG roles (tanks, and so on). You can switch your class during battle, which changes your character’s appearance and your skills. There will also be some character customization when you begin the game — hopefully something that let’s you get away from the default face, the smirking blonde.

Rizzo explained to me that the multiplayer is both real time and asynchronous. You can have a friend’s character being directly controller by them or, if they’re not present, AI. The story is told through animated, 2D cutscenes and written dialogue, while the experience is meant to be persistent, like an MMO (Rizzo got his start working on Everquest).