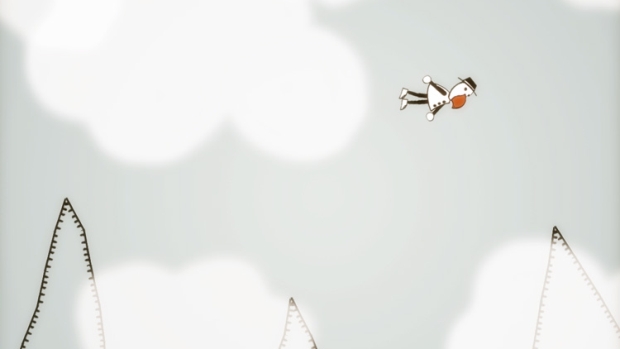 Winner of the 2009 Independent Games Festival Seumas McNally Grand Prize, Blueberry Garden is now available on Steam for the borderline ridiculous price of five dollars. Grim already told you this.

He did not tell you that Blueberry Garden is also one of the best indie games of this year.

On its surface, Blueberry Garden seems almost boring; a quasi-nonlinear platformer with a minimalist art style and some unspectacular powerups you can activate by eating different kinds of berries. Whoop-de-goddamned-doo. It’s only after spending a few minutes in its world — experiencing the music, flying through the sky with only the slightest inkling of where you might go — that the magic of Blueberry Garden makes itself apparent.

It is like every other game you have played, except it is something completely new. It feels instantly familiar, yet refuses classification. There’s a demo on Steam, but again: it’s five bucks.

Go check it out, or hit the jump as I try and fail to put my adoration for this game into (spoilery) words.

On my first playthrough, I was downright surprised as how enjoyable I found the overall product to be. I generally hate nonlinear platformers (I may be the only member of staff who is not even remotely interested in Metroid: Other M), but Blueberry Garden shows a degree of focused, minimalist design reminiscent of Windosill: yeah, you’ve got nonlinear world to explore, but that world is so clearly divided into different sections by altitude and your ability to reach them that exploration never truly feels overwhelming. One immediately gets the sense that the garden is quite, quite big, but only by building your tower does more and more of the garden become accessible.

Rather than relying on strict, linear methods of earning tower components or traversing the world, the different berries in the world allow the player to explore the garden on their own terms. The blueberries and starfruit feel less like silly, one-off powerups and more like legitimate tools that afford the player far more agency than he might expect. By utilizing the powers of flight, underwater breathing and terrain deformation, the player can truly explore the world on their own terms, making the garden feel that much more tactile and real. It feels as if the garden has always been there as a living, breathing entity; one never feels the overbearing hand of the designer attempting to force you into a particular mode of play. When combined with the easily understandable world map, these base mechanics make the blueberry garden an enjoyable place to explore on a purely mechanical level. 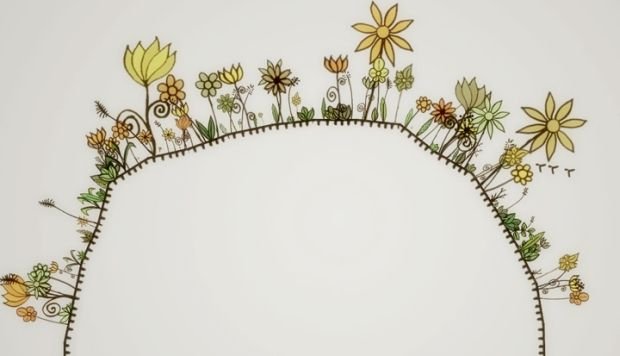 But to discuss the mechanics alone is to ignore the most obvious, and perhaps most effective aspect of the game: its art design and music. Everything about the game seems designed to lull the player into a sense of secure, almost zenlike calm. As there are no enemies in the garden and no immediately obvious overarching goal outside of constructing the tower, one might assume the garden exists only to relax the player by providing simple, optional goals that can be completed at any pace the player so chooses. Initially, the game seems to be an unquestionable triumph in this regard; progress up the tower is slow, perhaps, but the beautiful music and unobtrusive visuals make the garden a place one might want to hang around in for hours at a time.

Until the water begins to rise.

Suddenly, things become clear. This garden isn’t some pointless zen diversion; it’s a damned deathtrap. It’s not enough to just sit around happily eating berries and wasting time while the water level slowly rises and the plants start drowning. By the end of my first playthrough, I felt sort of like the grasshopper from The Ant and the Grasshopper; even though the game explicitly shows a giant, active faucet pouring water into the garden at the game’s beginning, I didn’t think anything of it. What’s a little bit of water? I’m enjoying myself.

The water level continued to rise, submerging more and more of the landscape, making it impossible to build my tower any higher. I found a floating log that had once been a bridge and stood on it, riding the flood upward. It drifted slowly away from my tower, which was soon overtaken by the water as well. I rode back and forth along the garden atop my makeshift canoe, the comforting music replaced by the whistle of a distinctly haunting breeze. 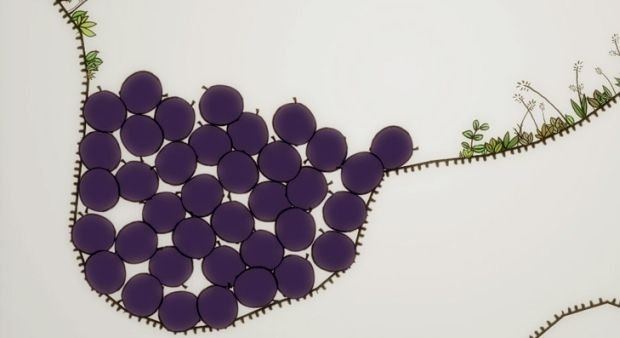 I rode the canoe until the water level reached the top of the garden (marked only by the fact that the walls stopped being drawn — evidently, my canoe strategy was something of an exploit) and I drowned. It was a creepy, depressing, and subtle ending, and one I would have been more than happy to settle with had it not been for the game over screen that encouraged me to try again.

I properly beat the game on my second playthrough, which felt almost nothing like my first. Relaxation and serenity had been replaced wholesale with a mixture of judicious planning and tense panic — this world is beautiful, yeah, but it’ll all be dead in fifteen minutes if I don’t hurry the hell up and build the tower to a sufficient height. I’m really impressed by how the strategies required to achieve the actual goal of the game run totally against what the game seems to communicate to the player: don’t relax, don’t waste time, don’t dick around. The emotions I felt and strategies I employed in both of my playthroughs felt so incredibly different and conflicting that I may as well have been playing two different games. I’ve really never had an experience like that before. Only after you’ve done what needs to be done by you is it possible to truly explore the world with relaxed impunity.

As you can probably tell by now, it’s difficult to fully explain what Blueberry Garden is, or what it feels like. I’d highly suggest just playing the thing for yourself. It’s about as long as you’d expect a $5 game to be, but it may well give you something to think about for a hell of a lot longer than it takes to play through the game twice.