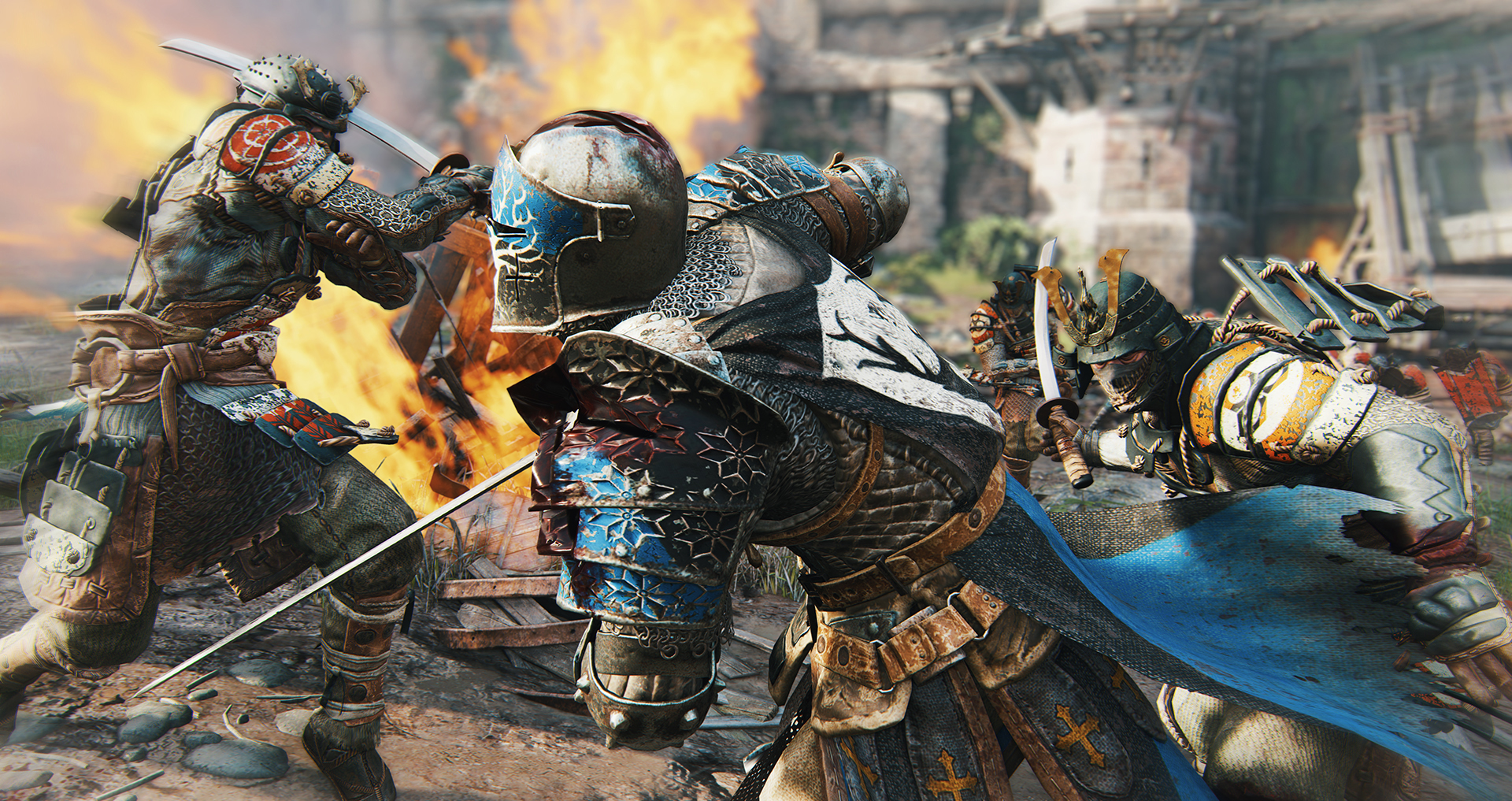 Games have always struggled to make multiplayer sword fighting fun. It should be the simplest thing in the world, I mean, what is more video game than lopping off someone’s head with a broadsword? But, it’s trickier to pull off in practice than it sounds.

Something deep and fiddly like Bushido Blade nails the nuances of swordplay, but only works for strict one-on-one duels and tends to scare off the general audience. MMORPGs can capture the feel of massive battles, but rely on the “combat dance,” the flailing pantomime of axe heads and spear points clashing against each other. A thin veneer of combat draped over what is essentially a spreadsheet of HP and armor ratings. Dark Souls PvP gets it right for the most part, allowing for interesting duels with multiple opponents and all sorts of weapons. But the number of hours you have to devote to be even halfway decent at it is a pretty big ask for most players, and even then it’s tucked away in the nebulous corners of the game.

After spending some time stabbing away at the closed alpha test this weekend, I’m pleased to say that For Honor seems to have solved the puzzle.

For Honor provides a unique combat system that allows for seamless transitions between intense one-on-one duels, hectic three-on-one scrambles, to Dynasty Warrior-like rampages through cannon fodder. The basics of hacking and slashing are easy enough to understand, but provide enough depth to encourage deeper strategies than simply swinging for the fences (or decapitation) with every slash.

For Honor takes a kitchen-sink approach to the medieval fantasy milieu, tossing knights, vikings, and samurai in a perpetual free-for-all for reasons that were not apparent in the alpha and probably not worth questioning at all. Despite choosing a faction alliance when first booting up the game, you can choose to play as any warrior you like. It’s not uncommon to see a five-man team that contains a viking raiding party, a couple of towering knights, and a ninja tossed in for good measure – like a posse made up of what was left over in the Halloween aisle. It’s silly and dumb in all the right ways.

The alpha provided a decent stable of characters to sample: two from each faction of what will be teams of four in the full game. These included the standard rank-and-file member of each group (longsword-wielding Wardens for the knights, axe-brandishing Raider vikings, and masked samurai with bushy moustaches) and a more exotic fighter with a specialized role. Suicidal Berserkers running in with axes-akimbo, the stalwart Conquerors who seem to be the only fighters smart enough to bring a shield to the battlefield, and the quick and clever Orochi ninja that specializes in counter-attacks and feints.

It’s a testament to For Honor’s combat system that each of these warriors were easy to pick up, but slowly revealed themselves to have distinctly different fighting styles. For Honor relies on a kind of rock-paper-scissor stance system when dueling other fighters. The right stick governs whether you are defending attacks from the left, right, or overhead, while also directing your angle of attack. Much like Dark Souls (an obvious source of inspiration), the right shoulder buttons choose between light and heavy attacks. Switching between your angle of attack and the strength of your swing is key to finding a way past your opponent’s sword and giving them a proper stabbing. There are also guard-breaking kicks and tackles to help get past overly defensive foes (think of the role throws serve in fighting games). It’s immediately obvious to understand as soon as you see it in motion.

But, each character puts their own subtle twist on the mechanics. The Orochi for example can only hold her guard up for a brief moment compared to the other warriors, but blocking an attack at the very last second lets her deflect the blow and quickly counter-attack. The viking Raider specializes in tackling and stunning foes, feigning with big axe swings only to suddenly switch to a surprise shoulder check. The Conqueror can’t feign with his mace, but can swing it around in a massive area to making fighting in close quarters a nightmare and can turtle up behind his shield.

There seems to be enough meat on the bones to make for an interesting metagame, but I’m not sure what hooks will keep the audience around to watch it develop.

As much as I enjoyed my time with For Honor, by Sunday I was already starting to feel like I got my fill of what was on tap and wondering what else the game had to offer. The game modes include one-on-one and two-on-two duels for players who want to focus on single combat, and the slightly MOBA-ish Dominion mode that seems to be the focus of the game. Dominion pitches teams of four against each other along with waves of disposable cannon fodder, fighting over contested capture points. But no matter how you dress it up, every game mode boils down to sticking the other guy with a sharp piece of metal. Even for someone like myself who really enjoys sticking people with sharp pieces of metal, the lack of variety stood out.

There are long-term goals to work towards. Each warrior has an individual progression to work through that unlocks new cosmetic options to trick out your favorite killer. Different patterns, color options, and symbols abound (although if you spend most of your time in Dominion mode like I assume most players will, you’ll be rocking team colors anyway).

What seems more troubling however is the presence of stat-boosting items. At the end of each match there is (what seems to be a low) chance of scavenging the battlefield for a new helmet, arm guards, or knick-knack for your weapon. These items adjust values like stamina regeneration, block damage, sprinting speed, and so on to give the wearer a small edge in battle. Duplicates can be mulched up similar to a trading card mobile game for character XP or to level up another piece of gear. Leveling up gear increases the stat boost it confers.

Of course, you can also buy random packs of scavenged gear using the in-game currency. Buying a five-pack of random items for 700 “steel” guarantees at least one above-average item along with the potential mulching material. Steel accumulates slowly, with even victorious matches doling out a paltry 10 steel a game. You can earn more by taking on optional goals (win ten Dominion matches, perform 20 executions, kill 300 NPC mooks, etc.), but even then most goals only pay out with 50 steel a pop and take a fair number of matches to complete. If you don’t think Ubisoft is scheming on selling steel for real money or different premium item packs, you’re kidding yourself.

I love the concept behind For Honor. From what I’ve played, I love the combat system, the different characters, and the many ways you can personalize them. But, I’m also looking at a game that really only has one note to play (even if it is a good one) and ties a grindy item-progression system to in-game advantages and likely a microtransaction economy. It’s a combination that has the potential to both burn out some players early, and then lock-out players who join the party late.

For Honor has an amazing foundation to work with. If the full release builds on what was in the alpha, it could be a real winner. The combat is strong enough to have legs, there just needs to be a bit more variety in game modes to keep things fresh. So long as Ubisoft doesn’t sabotage it with too many microtransactions or an item system that provides an unfair advantage to long-term (or spendy) players, it should be a great way to lop off some heads.