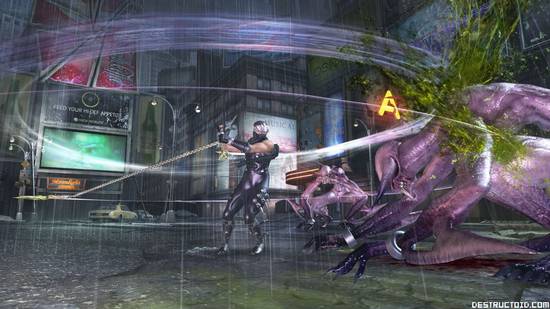 For the past few weeks, I’ve been playing around with a preview build of Team Ninja’s upcoming splatter-fest, Ninja Gaiden II. Published by Microsoft exclusively for the Xbox 360, Ninja Gaiden II is a tale of family, revenge, and sword-wielding canines wearing bondage gear. In short, the game seems to be shaping up to deliver more of the savage action Team Ninja delivered on the original Xbox back in 2004.

While not a complete build of the game, I made my way through six stages of bloodletting and extreme brutality. From the futuristic high-rises of Sky City Tokyo to the werewolf-infested streets of Venice, I’ve spent quite a few hours with this angrier, more violent Ryu Hayabusa.

Hit the jump for the five things I took away from my hands-on with Ninja Gaiden II. 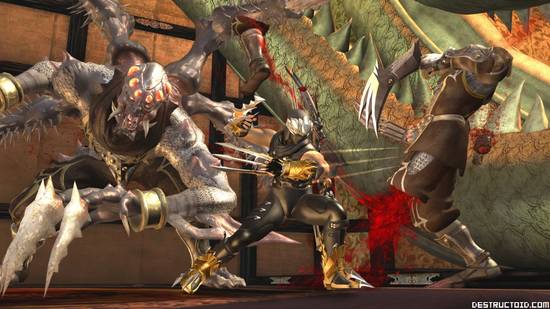 As if the first game wasn’t violent enough, Ninja Gaiden II gives new meaning to the term “hack and slash.” If Ninja Gaiden II were a movie, it would be directed by Herschell Gordon Lewis — buckets of blood and excessive, limb-removing gore is the name of the game, and with that the ESRB should have no problem slapping it with an ‘M’ rating. From the very start, the proper combination of quick and strong attacks will have you slicing off arms and legs with ease. Blood splatters on the in-game camera, and you’ll leave splotches on the ground and walls; the end of every battle looks like Johnny Depp’s character’s death scene in the original Nightmare on Elm Street.

Not simply for show, the removal of enemy limbs actually has a role in how you’ll play the game, and how enemy artificial intelligence will interact with you. For example, slicing off an enemy’s arm will anger them, making them more aggressive. Some combos will lead to removing both of an enemy’s legs, which will leave them crawling around on the ground, but making them more dangerous than ever. With nothing left to live for (ninjas and fiends don’t use wheelchairs, haven’t you heard?), the enemy will scramble in your direction, ready to commit suicide with you — and a live grenade — in its clutches.

Ninja Gaiden II introduces something called an “Obliteration” attack, which is essentially a vicious finishing combo that will put these limbless and dangerous enemies out of their misery. Pulling them off is rather simple — just hit the Y button when near the slightly dismembered enemy. The result is a wild combination (which varies based on your weapon) that usually ends in the lopping off of a head or another arm, or slicing something directly in half from the waist. In many instances, the “Obliteration” attack almost seems like it makes the game too easy; a successful counter-attack will often lead to a limb removal, which can be quickly followed up with a finisher. But in another way, it adds a different layer to the game, one in which you’ll have to have a keen eye to discern what opponents are more dangerous, and which need to be taken care of first.

2. I will not be following the “Path of the Master Ninja” 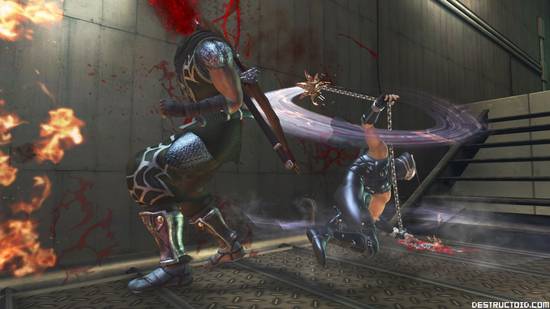 Just because you can quickly dispatch certain enemies, don’t think for a second that Team Ninja have skimped on the difficulty. In the preview build I have, there are only two difficulties available — “Path of the Acolyte” (“The path of the Ninja is not for the faint of heart. This route is for those who walk it for the first time.”) and the more difficult “Path of the Warrior” (“This path is only open to those valiant Ninja confident in their skill. Proceed with caution!”). Determined to make it through the entire preview for the demo, I took the lesser route, going with the easier difficulty.

At first, I had no problems tearing through the crowds of ninjas that stood before me, and the new “Obliteration” technique was making things a bit easier than I had expected them to be. By Chapter 4, “The Captive Goddess,” I had realized maybe I was wrong. Not only was the number of enemies I was asked to deal with increasing, but the aggressiveness of the AI seemed to be increasing exponentially. Save shrines were becoming fewer and farther between. After battling one particularly devastating mini-boss, a gigantic troll on a devastated New York City bridge, I was given no health or checkpoint and then thrown into a battle with a number of flying enemies and highly belligerent fiends. This particular point in the game may have eaten up an hour or so of my total play time.

So if anyone is concerned that Ninja Gaiden II isn’t going to maintain the blistering difficulty of the first game, don’t let it worry you. After clearing “Path of the Acolyte,” I gave “Path of the Warrior” a go; while I was able to make it through the first stage without much incident (by the skin of my teeth), just thinking about that troll in Chapter 4 gives me the shakes. The final game will even have two more options even more difficult than “Path of the Warrior.” Good luck with them, guys.

3. Maybe Team Ninja made the original game look too good 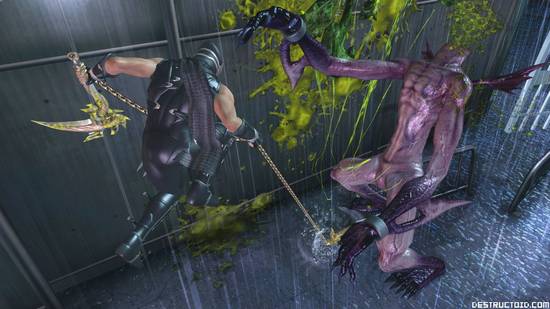 If your memory isn’t serving your well, allow me to refresh it — when Ninja Gaiden was first released on the Xbox in 2004, it was a mind-blowing feat of technical prowess. It was, without a doubt, one of the fastest, sharpest-looking games of the last generation. Side by side with some Xbox 360 games, Ninja Gaiden still holds its own.

The build I have is not nearly final, with many cut-scenes not yet complete (missing textures, etc.). That said, Ninja Gaiden II looks damned good — especially the opening Sky City Tokyo stage, and the impressive architecture and water of Chapter 5, “The Aqua Capital.” It has all of the lighting and texture effects that simply weren’t possible last-gen, and it’s hard to sneeze at how slick the game looks in high definition. But unlike the original title, Ninja Gaiden II hasn’t yet blown my mind with its visuals. I’ve no doubt that Team Ninja are pushing the hardware to some extent (and that the game is going to look far more polished when it hits retail), but the game has a look that’s almost too similar to the original.

4. Dogs with swords are fierce opponents 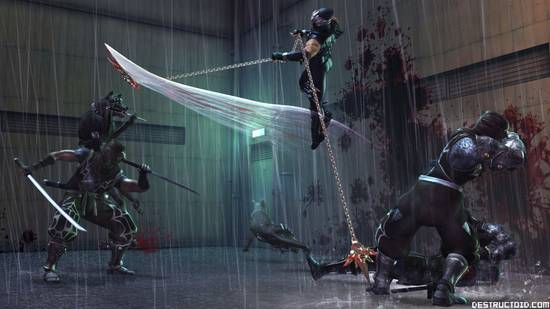 A few days after we receive the preview builds, I get a late-night call from one Ron Workman. He’s flustered, and sounds a bit upset.

“Dude, there are dogs in this game,” he says, “that attack you with swords.”

I tried to picture it in my head — a dog, standing on two legs with a sword strapped to its paw. It sounded pretty ridiculous. But in reality it’s only half as a silly, as the four-legged creatures you first encounter in Chapter 3 (“Thunderclap of Catastrophe”) are indeed wielding swords. Only they’re just carrying them in their mouths, and they’re also wearing leather bondage gear.

The game offers no explanation for this, but who really needs one? The angry, four-armed wolf-like greater fiend Volf commands an army of werewolves to terrorize Venice in Chapter 5. And I think I mentioned earlier that you fight a troll on a New York City bridge. So dogs wielding swords while wearing bondage gear? It’s just another day for Ryu Hayabusa, isn’t it?

5. Ninjas need to be more careful not to lose their weapons 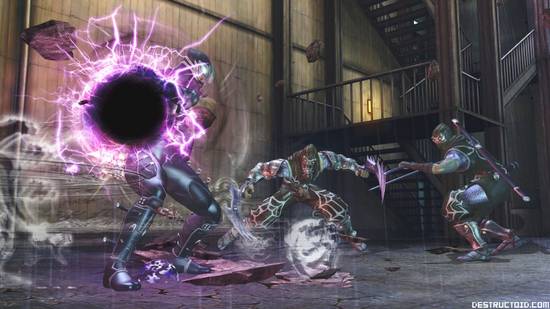 In Ninja Gaiden II, there are weapons all over the damned place. Across the six levels in the preview build, I found eight different melee and projectile weapons, most of them lying on the bodies of fallen ninjas or in random boxes.

Some of the new weapons you can see in these screenshots, others you’ll simply have to use your imagination. The Wolverine-like Falcon’s Talons and the scythe attached to a chain, the Kusari-gama, are sure to be favorites simply due to how slick Ryu looks wielding them. Swinging the dual-swords, Dragon’s Claw and Tiger’s Fang, was fun and seemed to be the best for quickly dismembering enemies. The short Eclipsed Scythe is good for some particularly violent “Obliteration” moves, and is the final weapon I came across in the preview build. But I spent most of my time with the Lunar Staff, which was easy to use (a few button presses send you into some long combos) and yielded the best results for me overall.

Projectile weapons range from the obvious — like the shuriken and incendiary shuriken — to the rather surprising. The Fiend’s Bane Bow is quite useful this time around, allowing you to fire while moving or hold down B to charge up and aim more precisely. (It needs to be noted that the reticule is the preview build was smallest red dot Team Ninja could have possibly decided to use, and one that I didn’t even notice the first few times it was on the screen.) I also came across the Gatling Spear Gun, which fired an unlimited amount of explosive spears, but had a slow rev-up time, which made it impossible to use in close quarters.
—-
I’m going to cheat a bit and throw in the sixth thing I learned from playing the Ninja Gaiden II preview build — the game’s June 3 release date simply isn’t soon enough.