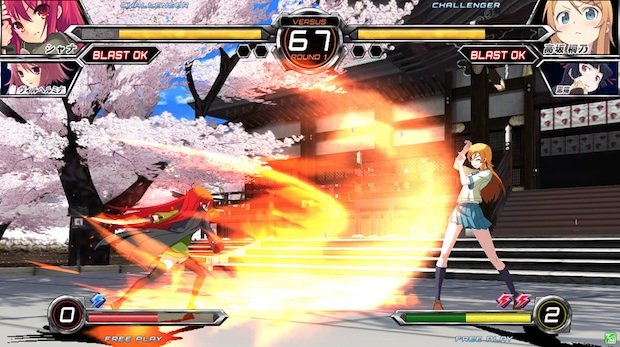 If you’re not an anime fan, you’re probably not going to appreciate this footage as much. That said, it’s still a beautiful fighter that’s expected to come to both arcades and consoles soon, so check it out.

Dengeki Bunko Fighting Climax is a tag-team effort between Sega and ASCII Media. It’s packed full with anime characters from ASCII’s various series (Kirino from Oremio, Shana from Shakugan no Shana, Mkoto Mikasa from Index, and Sword Art Online‘s Asuna), with assistance appearances from supporting characters like Oremio‘s Kuroneko. The new official webpage for the game has a character section that shows all of the appearances revealed so far. Another reveal is set at an upcoming Dengeki festival in Japan.

A screenshot gallery lets you peek at the various costumes for these characters.