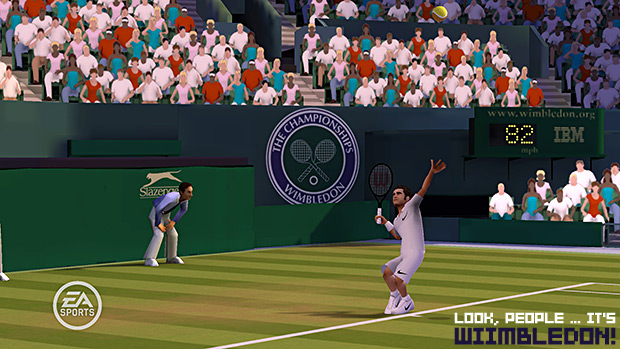 Last summer, EA announced that they were working on a brand-new tennis franchise (the working title was “EA Sports Tennis”). The original press release noted that the title would be released on the Wii first, with MotionPlus support, and it wouldn’t come to “next generation consoles” [sic] until after the Wii launch.

We’re only just now getting our first look at the Wii version of EA Sports Grand Slam Tennis — today, EA released eight screenshots and three player renders featuring tennis stars of yesterday and today: Ana Ivaniović, Rafael Nadal, Andy Roddick, and Pete Sampras. The game will be shown off to the press for the first time at an event on Thursday, which, sadly, we won’t be able to attend. (However, IGN put up an exclusive preview last week.)

I really like the look of this game. Obviously, the Wii’s hardware isn’t conducive to ultra-realistic graphics, so it’s good to see developers playing to the console’s strengths (as opposed to merely porting down the HD console versions of their games). If you look at the screenshots for Grand Slam Tennis, you’ll notice that the game has a stylized design without being overly cartoony — player faces have clean lines and textures are simple.

And from what we’ve heard so far, the game will provide a realistic take on tennis (gameplay-wise), so expect something more along the lines of the Wii version of Top Spin 3, instead of a Wii Sports clone. Here’s hoping that Grand Slam Tennis delivers — we’ll have to wait until this summer to find out. Check out the game’s official Web site for more details.