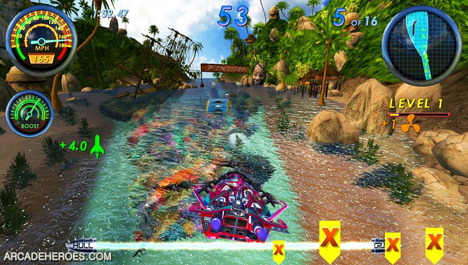 If you didn’t just read the above text in the voice of the corny announcer from Hydro Thunder, you ought to be ashamed of yourself. I practically worship the arcade racer, and if A) that doesn’t freak you out and B) you too have had your face rocked by the game, then listen up for some fantastic news.

Arcade Heroes is reporting that the original team behind Hydro Thunder is working on another boat racer called H2Overdrive which contains many of the same elements that made Hydro Thunder so unbelievably good. Additionally, the new game is supposed to be shown off later this month at ATEI 2009 in London.

Before you get all skeptical on me, the H2Overdrive title is a tentative one, and bears no relation to the PlayStation 2 game of the same name. Alright, now you are free to either join me in my absurd level of sheer excitement or wonder why I’m making such a huge deal out of this.