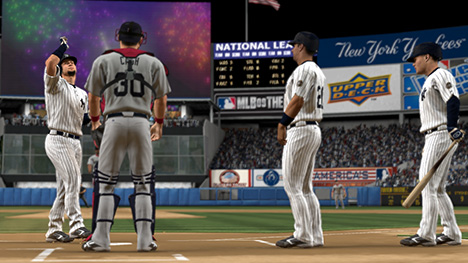 Sports fans will likely remember that this year’s best baseball videogame, bar none, was SCEA San Diego’s MLB 08: The Show. The game happened to be the subject of my first article for Destructoid, and in my opinion — and that of most other gamers — it blew 2K Sports’ effort, MLB 2K8, out of the water.

On Monday, Sony officially announced the next installment in the series, MLB 09 The Show (yes, the title appears to have received a colectomy). However, those of you who read ESPN.com may have caught their exclusive reveal from Jon Robinson (formerly of IGN Sports), which hit last Friday. There’s a laundry list of new features (you can read about them in the press release after the jump), and after perusing it, I haven’t been this excited for a sports game since NHL 09.

Chief among stuff that’s new for this year’s iteration is a feature that Robinson dubbed “Trash Talk 2.0,” wherein you’ll be able to use a headset or USB microphone (such as the Rock Band mic) to record yourself yelling all kinds of crazy things, such as “get him a bucket, he’s throwin’ up!” or “Boston sucks!” If you want it to sound like the entire crowd is chanting, don’t worry — the game will take care of that.

MLB 09 will also bring Road to the Show 3.0, the superb mode that — like Be A Pro in EA Sports’ games — puts you in the cleats of your own created player. Sony has changed the much-maligned steal/lead-off system, thankfully, and they’ve added interactive training. And since baseball is all about nuances and details, Franchise 2.0 features additions that hardcore baseball fans will love, like salary arbitration, waivers, and the expanded 40-man roster allowing for September call-ups.

There’s too much to cover in this space; be sure to check out ESPN’s first look and the announcement post on the PlayStation.Blog, as well as the first five screenshots of the game in the gallery above (they include a look at the new Yankee Stadium — and fear not, Mets fans; Citi Field, is also in the game). MLB 09 The Show will be out for PS3, PS2, and PSP on March 3, 2009 — so if you’re a baseball fan, you might want to get yourself a PS3 between now and then.

“The MLB franchise has been recognized as the industry leader in terms of realism and overall gameplay and we’re looking to stay at the forefront by taking it to another level with MLB 09 The Show,” said Scott A. Steinberg, Vice President, Product Marketing, SCEA. “With enhanced gameplay features and more attention to detail than ever before, MLB 09 The Show is prepared to deliver an unsurpassed next-gen baseball experience.”

MLB 09 The Show continues to set itself apart from the other MLB games on the market with its attention to detail and unparalleled gameplay. Looking to build on that reputation, the game has added several new features and subtleties that play a huge role in bringing the baseball experience to life. Incredible stadium detail and signage, wear and tear on the field, dusk to night lighting transitions, and stadium JumboTron animations help immerse users in the ultimate baseball experience.

The popular “Road to the Show” feature returns, giving fans the chance to play offense and defense and truly immerse themselves in gameplay from a custom-created player’s perspective. This year, Road to the Show includes interactive training and coaching as users navigate through a career that culminates with a shot at the big leagues. “Online Season Leagues” are also newly available, allowing fully functional drafts and providing players with a flex calendar to play games ahead in the schedule. Also back for PS3 and PlayStation 2 is “Franchise Mode,” complete with the long anticipated 40-man roster. In Franchise Mode, fans must think and act like an owner while dealing with issues such as salary arbitration, waiver transactions, and September call-ups along the way. However winning games isn’t the only thing that matters, as users must deal with clubhouse chemistry, roster management, and other issues that arise over the course of a season.

MLB 09 The Show brings back the ability to create custom music tracks using the “My MLB Music” feature. However for this year, players will be able to edit music tracks to assign batter walk-up tunes using the “Custom Music” feature. Additionally, fans can record their own customized chants and yells and integrate them seamlessly into the ambient crowd noise to create an even more personalized rivalry.

The popular “Pitcher/Batter Analysis” feature returns on MLB 09 The Show for PS3 and PSP, detailing the breakdown of how a batter has performed based on pitch type and result. The game offers up 17 different pitch types for players to master and MLB 09 The Show details the different pitch grips and arm angles that hitters must address. Players can also hone their skills using a wide variety of “Training/Practice” drills, with each set of drills focusing on a different area of the game. Utilizing the “Progressive Batting Performance” feature, players are rewarded for superior skills at the plate but are also penalized for hitting slumps.

Once users master the basics and create highlights of their own, they can save each dazzling play to the PS3 hard drive with the “Replay Vault” feature, where every key play in the field and clutch at-bat can be replayed at any time. Also new to the highlight system is “End of Game Replays” where users are given an instant post-game summary of the most exciting and important plays of the game.

For fans who want to take their game on the road, MLB 09 The Show for PSP delivers big baseball action in the palm of your hand by utilizing core gameplay features found on the PS3 version. Unique to PSP, MLB 09 The Show will feature “SportsConnect News2Go” which offers fans the ability to go online to select and save the latest news feeds to their Memory Stick Duo and review at their leisure.

Exclusive for PlayStation 2 is the unrivaled “Player Creator”, providing users with endless possibilities for creating players, including everything down to their player’s face with EyeToy®. Users can also adjust their personal rituals, swings, and even emotions as they create and place themselves in the heat of a pennant race.