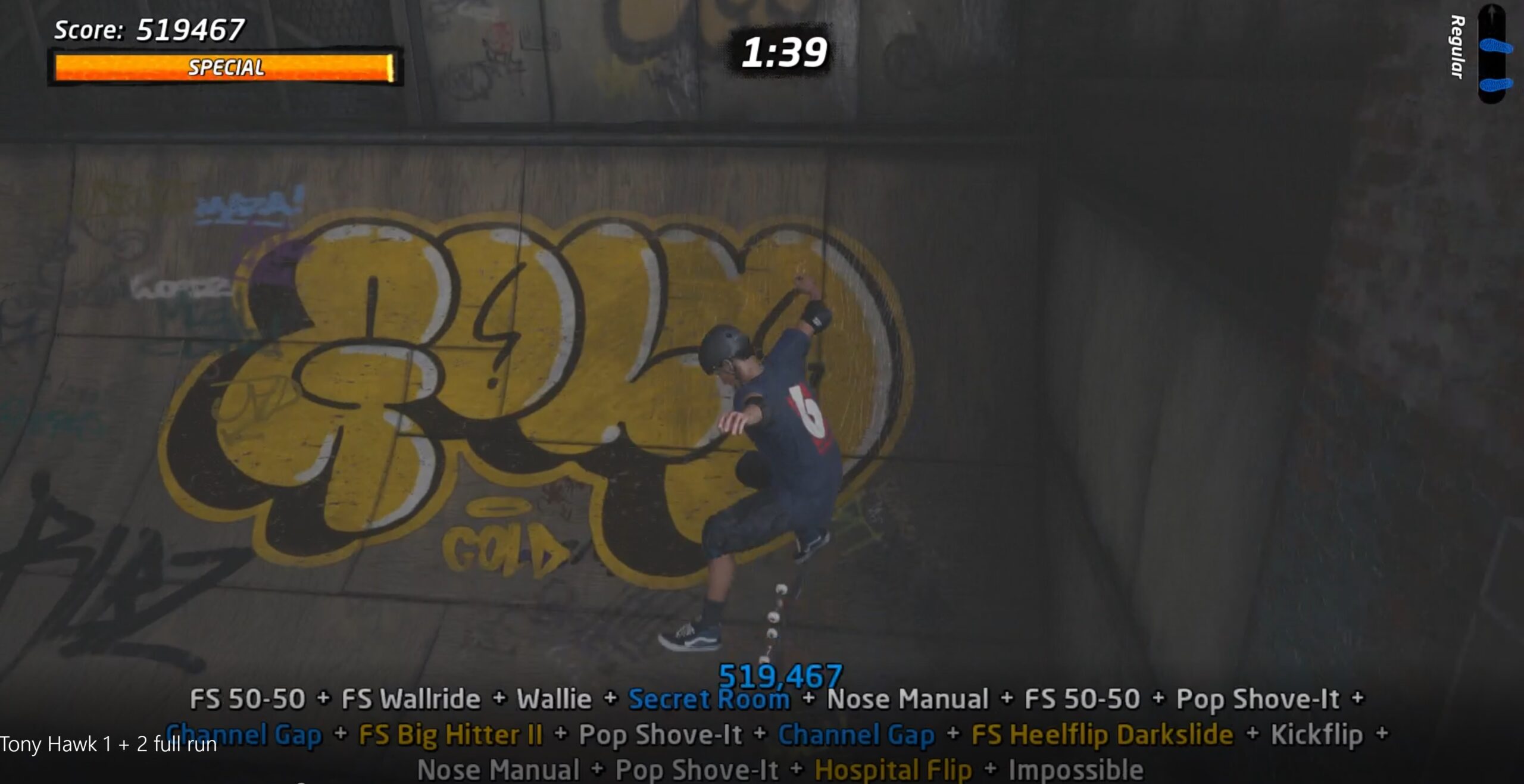 Show me what you’ve got.

What you see in the video above is the result of just 15 minutes of getting acclimated to the remaster on PS4. So far so good!

It feels weird playing Tony Hawk with new physics (whether it’s previous remasters or new iterations), but Vicarious Visions really had a handle on the original games when translating this new version. There are small kinks: times where you’re like “I totally nailed that trick!” But they are few and far between as you learn to better navigate the choppy seas of half-pipes and rails.

As a reminder, although this is technically Tony Hawk’s Pro Skater “1+2,” there are elements from future games that are present. The incorporation of the revert is the biggest blessing, which should allow for plenty of insane million-plus-point combos. It feels like such a small gesture but it’s genius: as you’ll have all of the tools available to make a perfect line combo on every level (of which there are 19 in the final version).

That includes the Warehouse. Picking everything back up in the very first level I played in this series in 1999 felt like second nature; in part due to Vicarious Vision’s commitment to the classics. Unlike the 2012 remake from Robomodo, which had its own issues with the Unreal Engine 3 skeleton, this one feels much closer to the original. Vicarious Visions is one-upping Robomodo by bringing back split-screen on top of that. Activision isn’t keen to make the same mistakes twice, it seems.

Although our demo gave us limited access to the main menus, everything is looking good so far. You can check it out for yourself: aesthetic customizations are in, as are unique special trick inputs and the ability to select a music playlist (yes!). Billy Talent’s “Afraid of Heights,” Goldfinger’s “Superman,” Rage Against the Machine’s “Guerrilla Radio” and Tyrone Briggs’ “Lose Control” are the four songs on offer in the demo. Nearly every track from the original two games are coming back though, as well as 37 new tunes.

As far as UI options go, everything a Tony Hawk player could want looks to be covered, like turning off individual facets of the HUD, swapping to “legacy movesets” for both classic entries and allowing “assists” (kinda like cheat codes) for any type of trick. It’s fairy comprehensive and should delight everyone from veterans to newcomers who are just earning their wheels. Tony Hawk’s Pro Skater 1 + 2 is out on PC, PS4 and Xbox One on September 4. If you pre-ordered digitally, you can access the Warehouse demo on August 14.

As for my early impressions with it: there’s something so surreal about listening to the lyrics for Superman and hearing “I’m getting older all the time” 21 years after playing the original Tony Hawk’s Pro Skater. This is a series practically everyone I knew at least dabbled in. I hope that same sense of community blossoms out of a strong foundation for Tony Hawk’s Pro Skater 1 + 2, and sets the stage for more remasters and a proper follow-up.