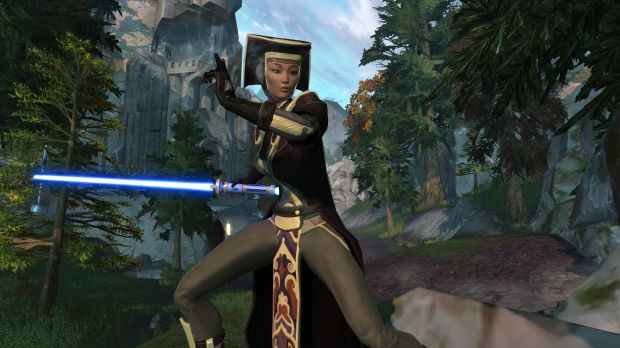 With six classes announced, things have looked pretty good for LucasArts’ and BioWare’s Star Wars: The Old Republic. After all, with Troopers, Jedi Knights, and Smugglers for the Galactic Republic, and Bounty Hunters, Sith Warrior and Imperial Agents for the Sith Empire, there are plenty of character choices for gamers to rock out with. Of course, knowing the nature of gamers, this is never enough for us, so what’s to happen for our picky and whiny needs?

How about announcing two more classes? Of course! Rounding out the choices include the Jedi Consular, a new Jedi class for the Galactic Republic. This character offers a more thoughtful response to attacking, as opposed to the direct brutal attacks of the Jedi Knight. There’s a lot of support options, as well as plenty of Force attacks. Promises to be a well rounded option for people looking for something a little different than typical Jedi attack options.

And finishing things up on the Sith Empire is the Sith Inquisitor. Fulfilling the role of a Palpatine-like character, the Sith Inquisitor uses a lot more attacks based on Force Lightning and support. he hangs out in the back, letting other do more direct damage while he zaps away at enemies .Check out the gallery for both class types in action.

Both classes seem to fix an empty spot on each side of the Republic and Sith opposition: support and mage roles. While nothing is as cut and dry as traditional class definitions, it looks like players will have more badass options, without resorting to become something lame, like a vendor or dancer. Who the hell would want to be that?