Hey there Sedna, let me cut you a deal

I was at the very end of Fear Effect Sedna‘s Digital Dragons demo when I came across a puzzle that I couldn’t quite solve. The first major puzzle in Sedna forced me to explore the environment to defuse a bomb, and I actually kinda liked that! It felt like I was playing an adventure game from the early aughts – which sounds about right, considering that’s when the first Fear Effect came out.

But yikes, that last server puzzle. Even the positive reviews on Steam mention the puzzle as a low point, and it’s not hard to see why. The textures in this particular level either don’t have the solution, or obfuscate the answer so well that you’re stuck looking at the servers for a solution.

Looking at the code input screen, what do you think the answer is? At first, I thought it was 351682; eliminate the red numbers and just input the green digits from each block of numbers. Nope. 356182; read the numbers horizontally? Nope. 315268; organize each block of numbers in ascending order based on the icons in the upper right? Nope. I’ll give you a hint: it’s not any permutation of those six numbers.

I’ve got a fairly strong ego, so I’ve never been averse to asking for help during previews. Except that didn’t do me a lick of good, because all three people manning the Fear Effect booth weren’t able to figure out the puzzle either. We puzzled and puzzled until our puzzlers were sore – poking around the environment, trying all the permutations mentioned above, the whole business. There were four video game professionals working on this and we still couldn’t figure it out. Eventually, one of the reps texted a member of the development team looking for the answer. The word came back: “481376.” 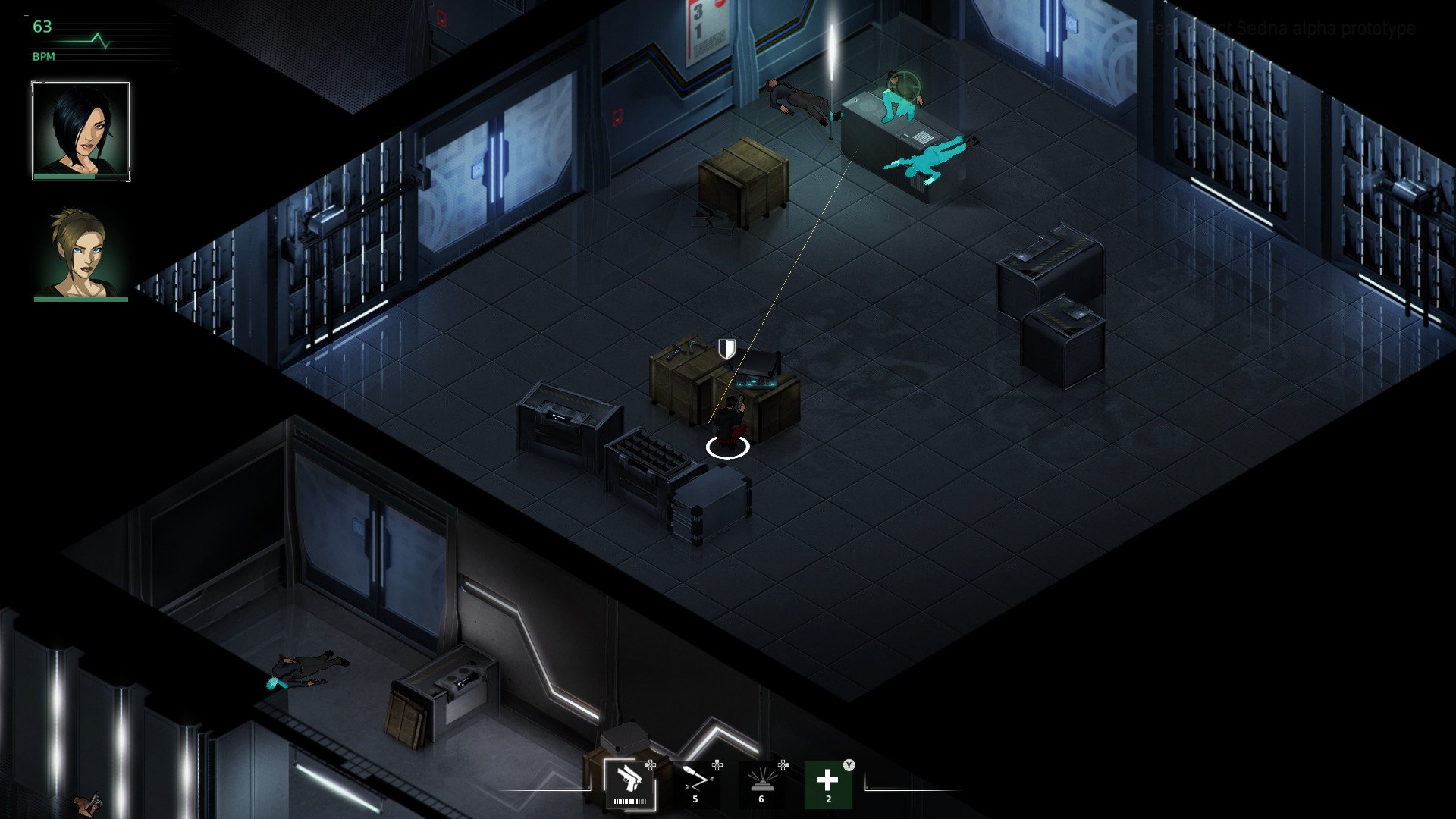 Would Fear Effect Sedna be worthwhile even without that puzzle? I suppose it depends on the depth of your affection for the original games – not to go all “fans of the genre,” but I don’t know that Sedna will fill your need for an isometric action game. It’s fine, in that I’m struggling to remember much about the combat aside from how easy it was. There’s no weight to anything, you just click on a guy until said guy has ceased to be. The player characters have special abilities, like a Wanted-style trick shot, but they just feel like more complicated versions of the regular bullets you’ve been firing this whole time. If nothing else, the repetitive and unengaging combat could make Sedna a decent podcast game; a game you play while you go through your Doughboys backlog.

I think Sedna might find an audience with the midnight movie set: the kind of people who like to clown on earnest yet embarrassing films. Video games don’t often get to be “so bad it’s good,” because watching a movie is a passive activity, whereas you have to actually play that bad video game. It’s like with food: a wise man once said about Guy Fieri’s New York City restaurant that you “can’t eat ironically.” The same is true for video games.

But since playing Sedna is more like guided meditation than anything else, you’re free to enjoy the unbelievably bad dialogue and voice acting. If I was a betting man, I’d say this game will probably do gangbusters on the Let’s Play circuit. The voice acting sounds like the performers saw bad ’90s anime dubs as a challenge to somehow do worse, but it doesn’t help that the dialogue was almost certainly run through Google translate. It’s very subtle, but the lack of contractions gives it away – characters often say things like “we will” instead of “we’ll.” Here’s a YouTube video with all the cutscenes if you don’t believe me.

The demo I played at Digital Dragons is currently available on Steam, if very campy games with mediocre shooting is your bag. Fear Effect Sedna is currently set for a “2017” release, but the game as it stands right now feels stuck in 2001.