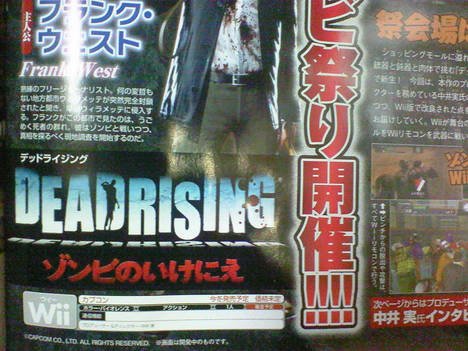 Here’s the biggest bombshell of E3 2008 and it doesn’t even have a thing to do with E3! The latest issue of Famitsu reveals that Dead Rising is coming out for the Nintendo Wii. Lots of people (especially Dale North) were expecting Capcom to reveal Dead Rising 2 today at their press conference, but instead got nothing but Lost Planet movie news.

I have no idea what the scans are saying, but there is one screenshot where Frank West is being grabbed by a zombie. The Wiimote comes on screen requiring you to shake the Wiimote to knock the zombie off, similar to Resident Evil 4 for the Wii.

And just to be sure, I just got off the phone with my Capcom contact and they have confirmed that Dead Rising is in fact coming out for the Wii.