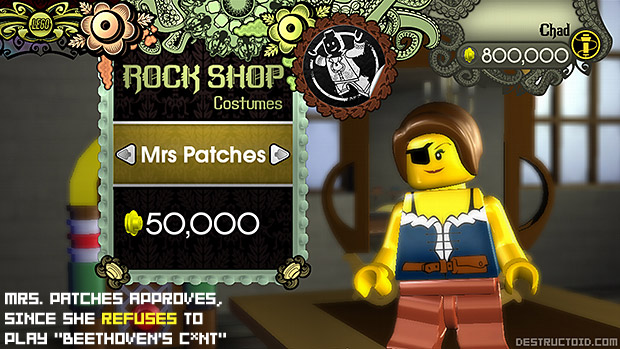 You know what’s awesome about Harmonix? They’re truly committed to the idea of Rock Band as a music platform. (Of course, that doesn’t include The Beatles: Rock Band, but I think most of us can agree that Beatles is much better off as a self-contained ecosystem — it’d be pretty damn silly to see Rock Band 2’s Fritzi Kostopoulos drumming along to “Come Together.”) LEGO Rock Band is the newest addition to the family, and for ten bucks, you’ll be able to export all of the on-disc songs to your hard drive.

The process works the other way around, too — but with an interesting wrinkle. LEGO Rock Band will be able to read the DLC songs on your PS3/360 hard drive, and it’ll let you play “family-friendly” tracks in the game. (They’ll show up in the song select screen as regular old DLC.) Don’t worry; this doesn’t limit you to stuff like SpongeBob SquarePants’ “The Best Day Ever.” As long as a song doesn’t contain objectionable material — such as, say, “Beethoven’s C*nt” by Serj Tankian — it’ll be fine. For example, “Baba O’Riley” by The Who isn’t what you’d call a kids’ song, but it wouldn’t make your grandmother blush or anything, so it’s playable in LEGO Rock Band.

In addition, LEGO Rock Band will include its own music store, which will only sell songs that fall under the same age-appropriate guidelines. (LEGO Rock Band is rated “E10+” for “Everyone 10 and older.”) Plus, since a lot of the DLC has already been censored for the “T” for “Teen” rating of RB and RB2, you’ll have more songs to choose from than you might expect — the Red Hot Chili Peppers’ “Sir Psycho Sexy,” for instance, is pretty much an instrumental as it is. So even if your pre-teen son starts scrolling through the LEGO Rock Band Music Store when you’re not home, he won’t be able to buy anything that might cause him to ask you where babies come from.

Our full LEGO Rock Band preview will be up in an hour — be sure to check it out!