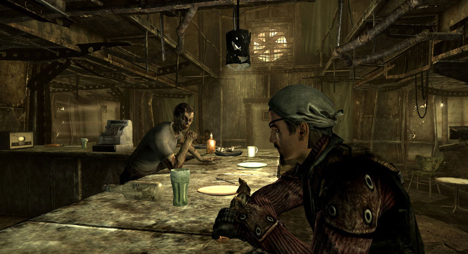 Today, Fallout 3’s Achievements spilled across the Internet. There are a total of 50 Achievements for 1,000 points.  The vast majority of the Achievements can be claimed from completing (presumably) Fallout 3’s various story-related missions.

The more interesting Achievements come from character growth, or more specifically, the Fallout 3’s “Karma” system. The game tosses out rewards based on the choice of Karma stance at regular intervals, which is sure to bring a bit of replay value to the game. Surprisingly, the game isn’t challenging its players to kill 10,000, 2,000 or even 100,000 creatures. The “Slayer of Beasts” Achievement only asks for a meager 300 creatures’ blood on your hands.

I’m personally happy with the “Psychotic Prankster” Achievement, which will be given when placing a grenade in a pickpocket victim’s pants. Finally, Bethesda is going to reward me for sticking funny things in my victim’s trousers. All those years of giving gemstones, daggers, and shields will culminate in blowing the person up.

Hit the break for the full listing but be wary as there are slight hints to the plot of Fallout 3.

Weaponsmith: 30 points
Made one of every custom weapon

Psychotic Prankster: 10 points
Placed a grenade or mine while pickpocketing

The Bigger They Are…: 20 points
Kill all the Super Mutant Behemoths