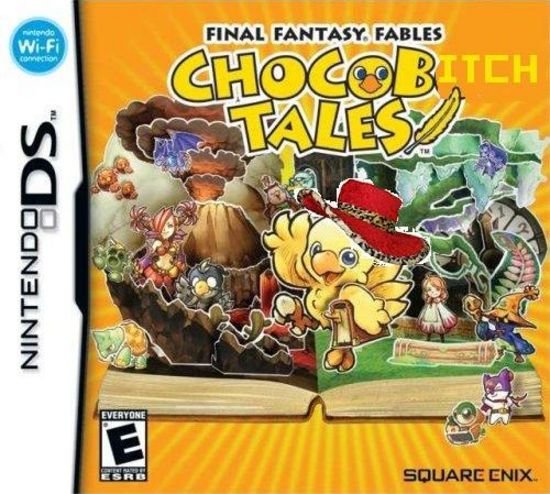 Here at Destructoid, we love it when our readers do the work for us — case in point, this week’s fake game idea. Conceptualized and Photoshopped by forumite BFeld13, it’s called Chocobitch Tales (as in, “Is Wayne Brady going to have to chocobitch”).

BFeld’s description is as follows:

You play as a chocobo, raised on the tough streets of Harlem. Growing up surrounded by crack whores, you are taken in by a loving pimp, who teaches you the rules of the streets. From there you level up your stats by keep the pimp hand strong, collecting money from your dope dealers, and performing drive-by shootings on Moogles.

It’ll evidently be available for the Nintendo DS, and you know what that means — stylus-controlled ho-slapping and fool-stabbing.

But what of the story mode? Will the whores be controlled directly a la The Sims, or will they be autonomous worker drones? Will rival gangs attempt to steal the chocobo’s prostitutes? Will the chocobo be able to avail himself of his own merchandise?

If you’ve got an idea as to what the gameplay might be like, or if you want to suggest your own fake game, then hit the official thread or the comments; in the meantime, though, someone program a Chocobo Pimp Simulator, and fast!