And God said, ‘Let there be games’

Religion is not something that is discussed much when talking about videogames, even though many games often feature religious themes and stories based on religious texts. It’s difficult to avoid these things, since religion has had such an enormous influence on all cultures, so of course we’re going to see it making its way into videogames.

I’ve always appreciated seeing religious themes in games, even though I’m not religious myself. The folklore is very interesting to learn about, and it’s not something I’ve spent a lot of my time reading up on by myself, so experiencing it in a videogame is about as close as I’m gonna get. Christianity in particular seems to be quite rare in videogames, but there are plenty of quality examples if you know where to look.

Here are a few specific examples of Christianity’s influence in videogames: 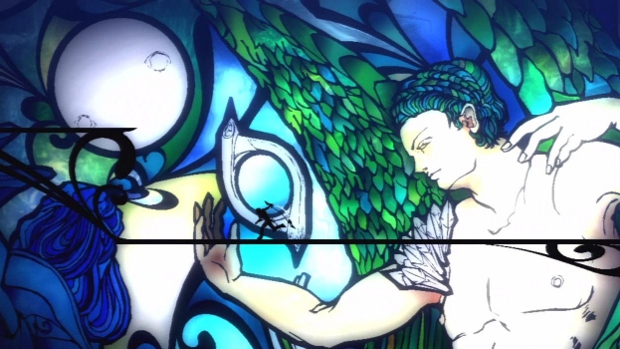 El Shaddai: Ascension of the Metatron

My favorite game to tackle Judeo-Christian themes is definitely El Shaddai: Ascension of the Metatron. The story is inspired by the Book of Enoch, and follows Enoch on his quest to find the fallen angels and prevent a great flood from destroying mankind. He is aided by four Archangels (Uriel, Raphael, Gabriel, and Michael), as well as Lucifel, who is commanded by God and is constantly communicating with him via cellphone.

El Shaddai is all about style, and it really showcases the beauty of religion through its story, music, and artwork. Much of the soundtrack consists of choir vocals and heavenly melodies; it’s one of the best videogame soundtracks I’ve heard. The artwork is equally beautiful, with surreal, heaven-like landscapes and breathtaking stained glass-inspired visuals.

It’s really an incredible game to experience, and I wish more games would try to tackle religious stories in a similar manner. The Bible and other religious texts contain many bizarre and exciting stories which would be perfect for videogames, and not just those cheesy Bible Adventures types of games. 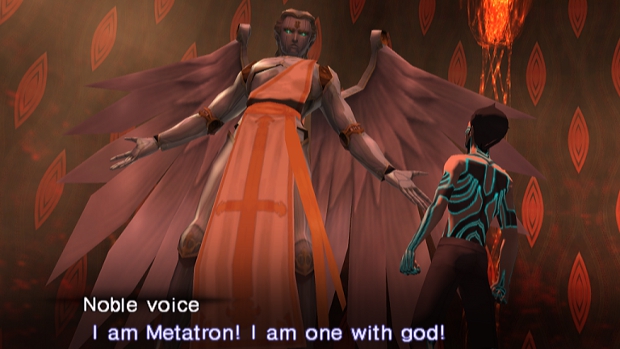 The Shin Megami Tensei series takes inspiration from all kinds of religions and mythologies, one of the most prominent of which is Christianity. Many of the demons and personas that can be fought and/or summoned in the series are taken directly from the Bible and other Judeo-Christian sources, but given their own unique designs to fit in with the SMT universe.

There’s the big guys, like Satan, Lucifer, and Helel (all separate entities in SMT games); the archangels Uriel, Raphael, Gabriel, and Michael; the Four Horsemen of the Apocalypse, in the form of White Rider, Red Rider, Black Rider, and Pale Rider; the many spheres of the angelic hierarchy with Angel, Archangel, Principality, Power, Virtue, Dominion, and Throne; and plenty of other personalities. Many of the games contain a compendium, which allows players to learn about where these characters come from in Judeo-Christian folklore.

Christianity takes a larger role in the plots of some Shin Megami Tensei games than others. In Nocturne, for example, Lucifer introduces the main character to powers known as Magatama, turning him into a Demi-Fiend. The player can choose to help Lucifer in order to learn more about his true identity, but a God-like figure known as Kagutsuchi will occasionally try to interfere and steer the player away. The final boss of Nocturne actually turns out to be Kagutsuchi himself, essentially leading player to defeating the Shin Megami Tensei universe’s version of God.

Sure, it’s rather blasphemous, but it’s all in good fun. It’s clear that the series holds a deep appreciation of all religions, Christianity included, based on the character design and influences. I actually learned a lot about Judeo-Christian folklore by reading up on all the different demons and personas; it was honestly a joy to learn about each new character. 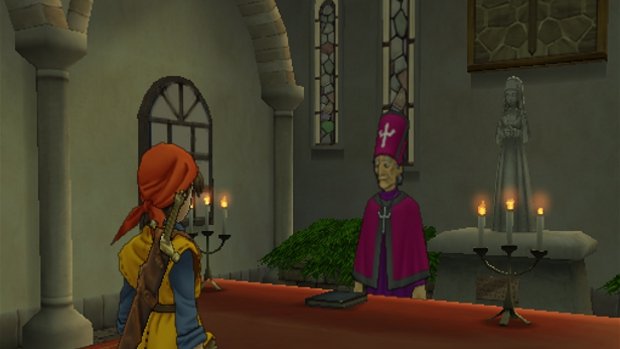 One thing that always stood out to me about the Dragon Quest games was their emphasis on churches. Most of the Dragon Quest games, save for the first game and some of the spin-off titles, have featured churches which serve a very important purpose. Of course, Christianity isn’t really a religion in the world of Dragon Quest. They have their own fictional religions, but it’s obvious that the churches are inspired by real religions such as Christianity.

The churches of Dragon Quest mainly serve as a save function. The player must make a Confession to the pastor, who will record all of the player’s deeds, thus saving the game. Churches also offer Resurrection, which revives fallen allies; Benediction, which removes curses; Purification, which removes poison; and Divination, which reveals the amount of experience points necessary to reach the next level. Players will be visiting church quite often.

I guess the reason this always stood out to me was because I had never seen such an obvious reference to religion in a game before playing Dragon Quest, or at least to the type of religion I grew up with. It’s kind of strange, given how prominent and influential religion is in real life. I mean, there’s plenty of mythological religion in videogames, like the goddesses of The Legend of Zelda and the powerful demigods of Final Fantasy. But seeing something as simple as a church in Dragon Quest, something religious that I could actually relate to, really left an impression on me. 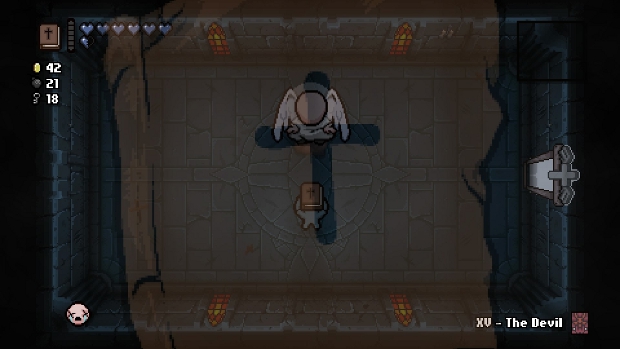 The Binding of Isaac

Some may see The Binding of Isaac as an anti-Christian game. The story revolves around a boy named Isaac and his mother, who hears the voice of God telling her to kill her son, and so Isaac flees to the basement to escape his mother’s wrath. It’s pretty clear that the story decries the type of extremist Christians who try to use the Bible for their own personal benefit at the expense of others, but there’s also an appreciation for religion there which is quite apparent when you look at all the items, enemies, and characters in the game.

All of the characters are based on Biblical figures; you can play as Isaac, Magdalene, Cain, Judas, Eve, Samson, Lazarus, Azazel, and Eden (which is more of a location in the Bible, but still). Many of the bosses in the game are also based in Christianity, such as the Seven Deadly Sins, the Four Horsemen of the Apocalypse, Uriel, Gabriel, and even Satan himself.

The game is also bursting with religious items. While Isaac can become demonic and powerful if he picks up certain things, many of the best items in the game are actually holy relics based in Christianity. For example, if he finds an Angel Room, he’s pretty much guaranteed to get something helpful: a Guardian Angel, Holy Water, a Rosary, a Mitre, a Scapular, a Halo, a Communion Wafer, and more. Holy items usually offer protection over power, but in a game like Isaac with enemies crawling all over the place, they are extremely useful.

Isaac can also find the Bible, a reusable item which grants flight, allowing him to fly over any obstacle. He can also use it against Mom to give her a taste of her own medicine, which instantly defeats her, although it will destroy Isaac himself if he tries to use it against Satan.

I think The Binding of Isaac attempts to be a conversation about religion. There’s nothing truly anti-Christian in the game, and in fact there’s a lot of stuff in there where Christianity is helpful and comforting. But it’s also not afraid to point out some of the more problematic aspects of religion as well. It’s an important conversation to have, so it’s nice to see videogames trying to tackle the subject. 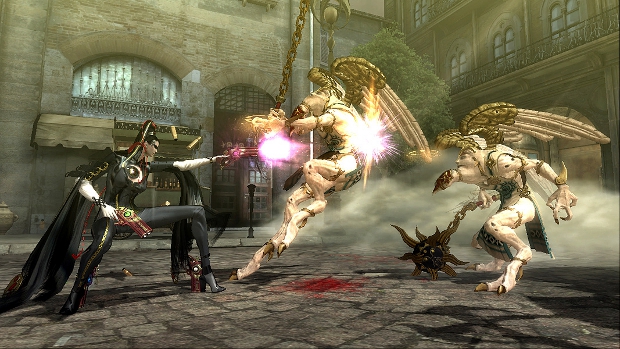 Bayonetta may be about witches with stiletto guns and crazy hair-based powers, but the story also takes a lot of inspiration from Dante’s Divine Comedy, which represents medieval interpretations of Hell, Purgatory, and Heaven, based on the views of Roman Catholicism.

In the Bayonetta series, the titular heroine travels through the worlds of Purgatorio, Paradiso, and Inferno, fighting angels of the various spheres of angelical hierarchy as well as the demons of Inferno. The angels are particularly great. I love their over-the-top holy designs, complete with feathery white wings, halos, gold plating, and everything you would expect to see from the Roman Catholic version of Heaven. I also enjoy the short cinematics which introduce each new angel, indicating their names and which sphere of the hierarchy they reside in, complete with glorious hymnal music.

It may seem unusual to be fighting angels, who are typically the good guys, but it’s not as though the game takes itself too seriously. I don’t think Christian gamers should feel weird about playing games such as Bayonetta, Shin Megami Tensei, or The Binding of Isaac, not only because these are fictional stories, but also because there is a clear sense of respect for the source material there. These aren’t ham-fisted ideas shoved into a game to bash someone’s personal philosophies; they’re carefully researched religious references used to entertain, educate, and/or spark conversation.

These were just a few, but of course there are plenty more examples of Judeo-Christian and Biblical influence in videogames. You’ll see it everywhere if you’re really looking for it. Games like Darksiders feature characters loosely based on religion, while other games like Dante’s Inferno take religious stories a bit more literally. I would honestly like to see more prominent religious themes in videogames, as I think they can make for some really interesting storytelling. And it’s not like you have to believe in a certain faith to enjoy such stories, as they usually offer universal advice in their themes. Even if the stories and characters are specific to a certain religion, the themes and lessons expressed can often apply to anyone.