You’ve met with a terrible fate, haven’t you?

With Majora’s Mask 3D coming out in a few weeks, I figured it would be fitting to make the first entry all about The Legend of Zelda: Majora’s Mask, which happens to be my favorite Zelda game. Feel free to share some of your own favorite things about the game in the comments! 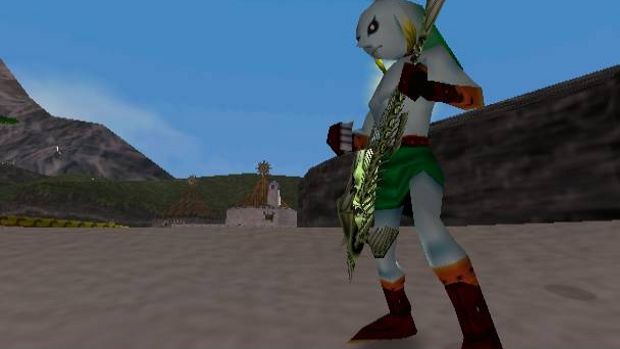 Green around the gills

One of Majora’s Mask‘s most unique features is Link’s ability to transform into various races by wearing certain masks. Link’s Deku and Goron forms are both really awesome for their own reasons, but my favorite has got to be the Zora form.

As a Zora, Link can swim quickly and gracefully through the water, gliding around and leaping above the surface like a dolphin! He also gets an electric shield and boomerang fins, which are both quite useful, plus a sweet guitar made out of fish bones. He makes a pretty rad Zora!

Swimming in the Zelda series usually becomes a tedious task (I’m looking at you, Ocarina of Time!), but the Zora form makes swimming so much fun that I sometimes went out of my way just to go jump in the water. I spent way too much time in the Great Bay area just goofing off in the sea. I perfected the art of leaping cleanly onto the dock of the marine research lab, tried to see how many dolphin jumps I could do in a row, swam around admiring the coral and seaweed, and generally had a wonderful time. I wish I had a Zora Mask in real life. 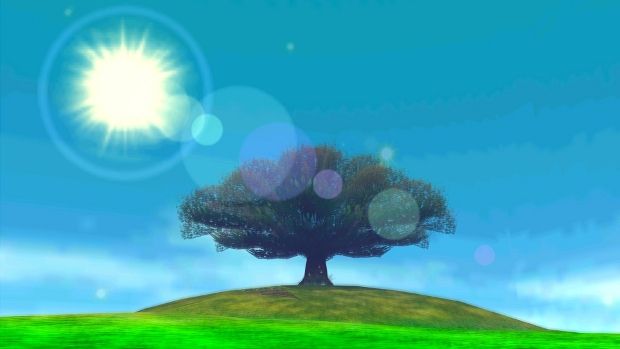 The moon is easily Majora’s Mask‘s most striking feature, so I’m sure it comes as no surprise that I’m including it. It’s always looming overhead with its unusually creepy face, getting closer and closer to its eventual collision with the town you’re staying in. Wherever you are in the game, you can look up into the sky and see this unsettling monstrosity, a constant reminder that you’re running out of time.

Eventually, you get to travel to the moon’s… surface? Insides? I’m not really sure, but wherever it is, it’s one of the most disturbingly serene locations in a videogame ever. The area consists of a single, giant tree on a bright, sunny hill, with a group of strange children running around wearing the masks of the bosses you’ve defeated.

The first time I saw this place, I was taken aback by the simple absurdity of it all. I didn’t know what to make of it, but I was also so enraptured by the sudden peacefulness that I ended up just wandering around in awe at the beautiful landscape, yet I couldn’t shake the feeling that something was off about the place. It’s so unexpected and surreal, and I absolutely love it! 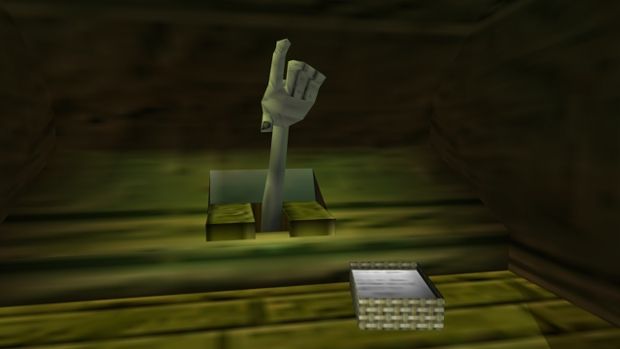 If you happen to be staying at the Stock Pot Inn and need to go to the bathroom in the middle of the night, you might be in for a nasty surprise. The inn’s toilet is residence to a mysterious, nocturnal… hand? Surely there’s a body that the hand belongs to, but you never see it. The grimy hand gropes around the bathroom asking for toilet paper, which you can bring it as part of a side quest. Surely this person needs more than just toilet paper, though. I’m sure they could probably use some help getting out of the toilet and directions to the nearest shower, for example.

The toilet hand is so mysterious that it leaves me with way too many unanswered questions. Who does the hand belong to? How did they get into the toilet? How has no one else at the inn noticed this yet? Why is there only one toilet in the entire inn? I mean, I REALLY had to use the restroom, but I guess I’ll just hold it until morning… 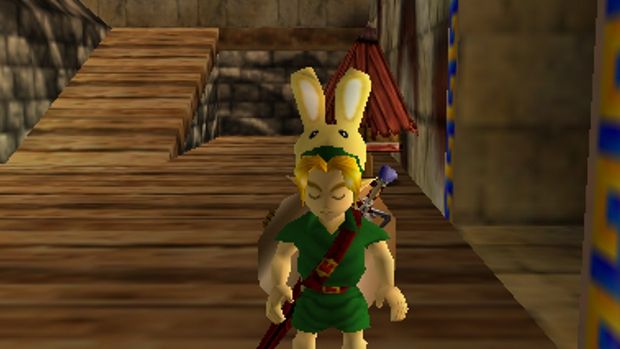 Anyone who has played Majora’s Mask probably spent the majority of the game wearing one mask in particular: the Bunny Hood! Not only is it adorable to see Link wearing bunny ears, which sway back and forth whenever he moves, but it also doubles his running speed. And in a game where you’re often traversing large, open areas, it’s insanely useful. Most masks are meant for specific situations, but the Bunny Hood is useful for just about any part of the game. I almost never took it off while in human form, unless I had to. If only more open-world games had Bunny Hoods…

Whenever I replay Majora’s Mask, I always make it my first order of business after leaving Clock Town to go track down the Bunny Hood. Luckily, it’s not too difficult to acquire. You just have to wait until the third day to access the farm so you can play with the cuccos while wearing the Bremen Mask, which you can get by talking to Guru-Guru at the Laundry Pool. Then you can speed around the world to your heart’s content! 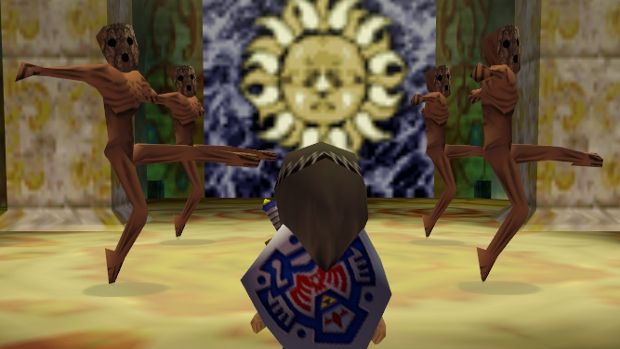 The Dance of the ReDead

ReDeads are arguably the creepiest enemies in the Zelda universe (save for maybe the Dead Hand). Their horrible shrieks freeze Link in place, allowing them to slowly amble up and give him a big old hug of death. The sound alone sends shivers down my spine, and their frightening appearance only makes matters worse.

In Ocarina of Time, you had to run around them quickly, and pray that they didn’t see you. Luckily, Majora’s Mask offers you a way to sneak past them and avoid detection, and it just so happens to be the most hilarious thing in the game! If you don any of the three monster masks (Gibdo Mask, Garo’s Mask, or Captain’s Hat), the ReDeads will apparently see you as one of their own. With no heroes of time in the vicinity, the monsters will drop their guard and suddenly break into dance. It’s shocking to see such terrifying monsters suddenly become so carefree and jubilant, while their faces remain hollow and soulless. Though I must admit, they’ve got some nice moves! 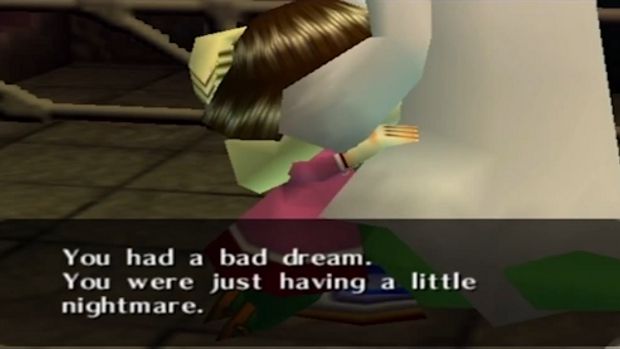 The soothing sounds of the Song of Healing

All of the music in Majora’s Mask is pretty great, but my favorite song by far is the Song of Healing. The Song of Healing is one of the tunes Link can learn, which you play throughout the game to heal tormented souls, usually granting you a new mask.

It’s such a beautiful, calming melody that I can’t help but linger in certain areas a bit too long just to listen to the music. I probably stood around in Pamela’s house a good ten minutes after healing her father because the music was so lovely, and it made the moment that much more powerful. It also plays inside the clock tower, where the Happy Mask salesman stays, but then you have to hang out with the Happy Mask salesman, and nobody wants that…

Oddly enough, the song can also be used to fix broken signs, in case you carelessly slice one in half with your sword. I guess inanimate objects need healing sometimes, too. 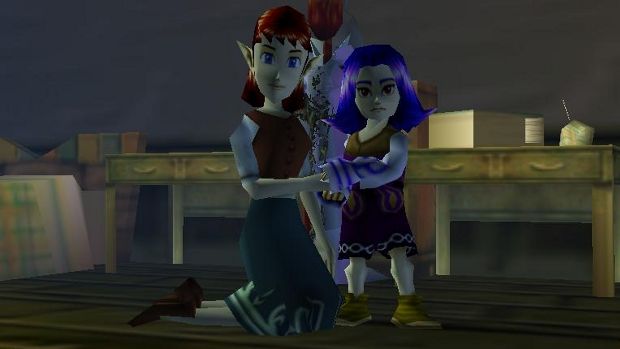 This is likely everyone’s favorite side quest, and for good reason! It requires you to spend all three in-game days focusing on this one quest, and it doesn’t end until there are only a few seconds left (or one hour, in game time) until total annihilation as the moon collides with Clock Town. But it results in one of the most memorable, emotional scenes in the game.

Once you’ve acquired Kafei’s Mask, you can begin the quest by speaking with Anju, a friendly woman who works at the inn. She asks you to deliver a letter to Kafei, her fiance, who has disappeared. Eventually you find Kafei, who appears to be a young boy hiding behind a mask. You learn that he was once an adult, but the Skull Kid cursed him to make him look like a child. A thief also stole his Sun Mask, which is an important part of the wedding ceremonies in Termina. So out of shame due to his appearance and lack of a Sun Mask, Kafei decided to go into hiding.

After a series of events, you will recover Kafei’s lost mask. With the mask back in his possession, Kafei finally comes out of hiding and returns to Anju at the inn. Even though he’s much younger now, Anju recognizes him immediately and forgives him for disappearing. The two exchange masks and officially become a married couple, with Link as the sole witness.

It’s just about the happiest moment in the game, yet also bittersweet. Sadly, you only have a few seconds to admire the union before you must turn back the clock, erasing the moment from history. That is, unless you’re ready to book it to the clock tower and beat the game right then and there, so that Anju and Kafei can really live happily ever after. And let’s face it, that’s really the only correct way to beat Majora’s Mask!