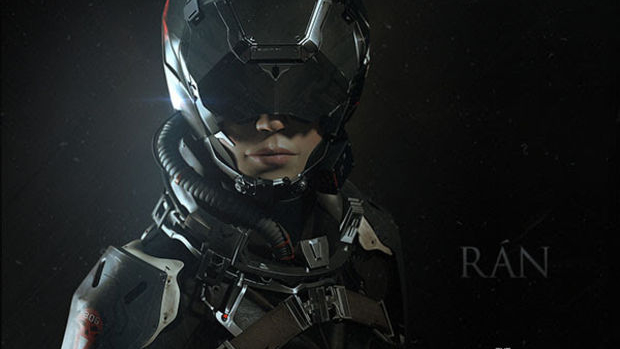 EVE Valkyrie is super neat. It looks like a cool dogfighting-in-space game when you watch a trailer, but actually being in the cockpit with the Oculus Rift? It’s a trip and used to great effect. Looking down at your fake chest and hands on the controls is sort of weird, like having a phantom extra limb.

Moving your head to look around the cockpit and out of the windows is neat. I knew there was just a wall behind me in real life, but when I turned around like I was backing out of a driveway, I saw more bits of my ship.

It’s not a perfect simulation. You still lose peripheral vision and have to do mildly exaggerated neck movements to look up or down or left. Maybe a mix of Oculus type tech and eye tracking is our future. But for the time being, EVE Valkyrie works remarkably well with the Rift — and looks better than anything I’ve played with it.

My time with Valkyrie was short, a two-on-two deathmatch. I spent a lot of the time marveling that I could look up through the clear cockpit and out into space. Then suddenly remembering that I should probably be watching the (space) road so I don’t run into debris or opposing missiles.

The space dogfighting was straightforward. Thrusters to accelerate, a brake to slow down. The ship was equipped with missiles and a machine gun. The missiles can shoot up to five at once if you paint your target long enough.

I managed a kill and two deaths. Looking up and seeing the missiles that are coming to kill you is pretty neat. When your cockpit shatters and you lose control of the ship and you’ve been killed, it feels odd. And then you’re back in runway and ready to rocket out to space again. It’s a neat experience, one the Rift is tailored for.