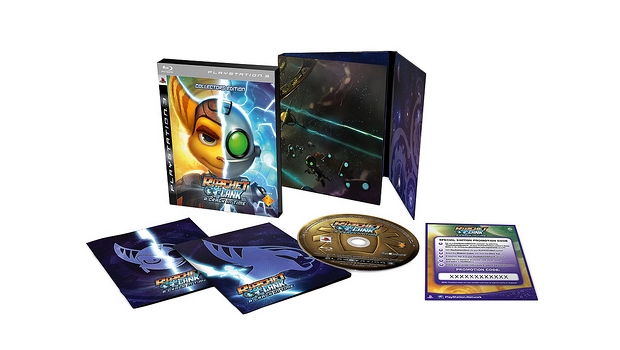 A Collector’s Edition version of Ratchet & Clank: A Crack in Time is coming to participating European retailers.

Revealed this morning on the official European PlayStation blog, the Collector’s Edition has a few Ratchet & Clank-themed treats for those with the necessary clink in their pockets. Coming in a lenticular-fronted foldout package, the edition contains an artbook containing exclusive Insomniac art, SCEE Product Manager Kevin Smyth’s foot, and a voucher for a bit of European exclusive content called the “Discovery Package.”

Discovery Package, in particular, sounds like a blast for any budding Insomniac stalker. The DLC lets players fool around in a level that “resembles” the studio’s office, which by the way, we heard was pretty dope. Built like a museum, the level will have a smattering of content that didn’t make it into the final product.