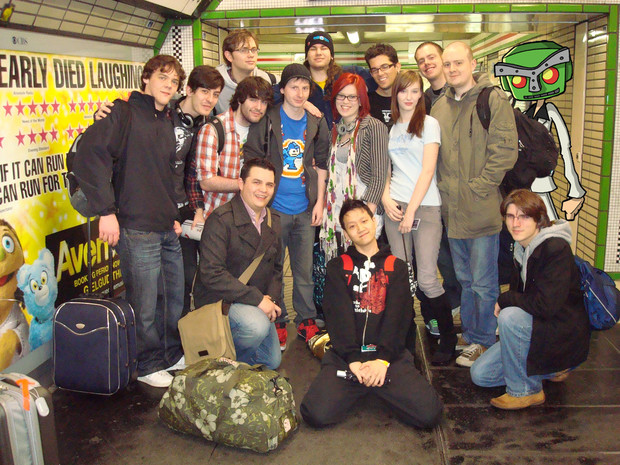 Last weekend was the second Eurogamer expo held in the United Kingdom. This was also one of the best weekends in my recent memory and perhaps my whole life EVER and not just because of the expo.

No, this was the first time Dtoid UK arranged to meet up and be sexy with each other.

Now I have never had the pleasure of going to PAX due to timing/money/being an arse but thanks to the Eurogamer Expo, I now have a small idea of what it would be like. PAX is a big deal to Dtoid and is kind of like Mecca to the community and for years now I’ve read the love letter blogs that follow every PAX wishing that I could have been there.

Now OK, the Eurogamer Expo doesn’t have a catchy acronym like PAX but it’s very similar. There’s a hired out space filled with upcoming videogames and developer talks throughout the event. Members of the Dtoid army travel to go to it from all over the country and even from Germany. So while it’s much much smaller in scale, the Eurogamer Expo is basically the UK equivalent of PAX and it’s fucking ace!

I must admit I’m not the most active member of the Dtoid army but I’ve always wanted the Dtoid UK community to get together like we did at the Eurogamer Expo. I’ve met and hung out with a few UK Dtoiders before but we’ve never had an event where lots of us could congregate but now we do and going and meeting crazy strangers from the Internet who probably have never heard of me or knew who the fuck I was was one of the best things I’ve ever done (even though I didn’t have to do very much). I met a lot of awesome people, formed genuine friendships (even though they probably think I’m a dickhead, hah!) and it was just amazing to get everyone together and have fun. I imagine this is what it’s like for people who go to PAX for the first time just with loads more people.

My “in real life” friends aren’t really big gamers or at least they aren’t into them as much as I am and so the Dtoid UK community means a lot to me because I get to hang out with fellow like minded gamers which I’ve never really had the chance to do before. The hope of meeting up with Dtoiders in a large group like this is the reason I signed up all those years ago, it’s just taken a long time to happen but it has been worth the wait. About 20 UK Dtoiders came down for this years Eurogamer Expo and although that pales in comparison to probably even the first PAX Dtoid went to [Actually, it’s pretty close to the first Dtoid/PAX get together! — CTZ], I believe that’s still a large group and quite the achievement especially when you consider that this is Dtoid UKs first official outing.

The Expo itself was actually pretty awesome. You never had to queue for long with the mega popular games like Assassins Creed 2 and Left 4 Dead 2 taking the most waiting time at about 20 minutes but for most of the other games you were looking at an average of a 5-10 minute wait which ain’t bad. I played pretty much every game there and there were some phenominal games but when I think back to last weekend, I don’t immediately think of the games. I think about the times I spent asking for things that were “more like 10 shitloads” with Dtoid UK.

I think about the times we spent in the arcade, ramming each other hard … in bumper cars, playing 16 player LAN matches of Quake 3, all those close matches of Street Fighter Alpha 3 (I will defeat you one day Justice!), wandering around Covent Garden, geeking out at Forbidden Planet, staying up drinking until 5AM and walking around with our trousers down… oh no wait…. that was just me.

I feel really privilaged to be a part of Dtoid UK and to have been a part of an awesome weekend/event and I have a feeling that the Eurogamer Expo will be as important to Dtoid UK as PAX is to the whole of Dtoid. I know I should have written this up sooner but well better late than never right?

So thank you Malcor, HammerTiem, Shakey1245, Half Left, Gandysampras, Nikmonroe, Corican, Batthink, XanderSan, ThePhil & Kat, Njsykora, Justice, Mikey, McSnow, DanGale, a special shout out to N0brein for travelling from Germany and a BIG THANK YOU to our fearless leader Pheonix Blood for organising everything. The Expo and the whole weekend was better than I could have ever hoped for. I honestly had the most fun I have had in a long time and it’s all thanks to you guys ^_^.

You are all fucking ACE and so sexy I might just cream my pants!